The “Baby Cas”, a 25 BTC physical coin issued by Casascius in 2011 realized $1,698,750 at GreatCollections on Sunday, after over 100 bids were received. Total sales for the single day of auctions exceeded $5.25 million. 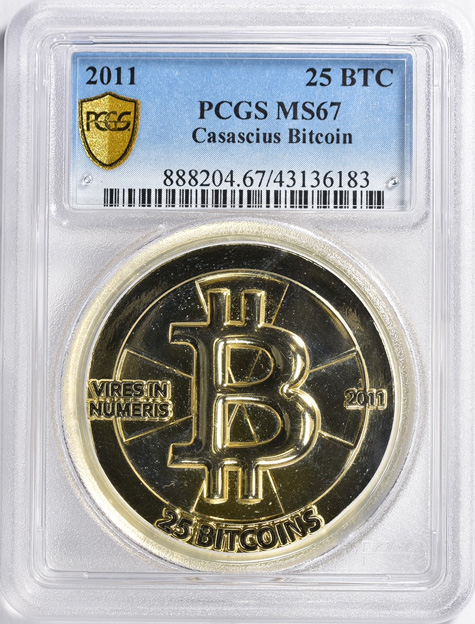 The physical Bitcoin, graded MS-67 by PCGS attracted the attention of over 200 bidders who were actively tracking the auction, with over 10,000 page views. The final price represented a $49,700 premium over the price of Bitcoin at the time that bidding ended.

The 25 Bitcoin “Baby Cas” was graded by PCGS alongside the holy grail of crypto physical coins - the “Gold Cas”, a 1 Oz. Gold Casascius coin with 1000 Bitcoin or BTC. The current value of the “Gold Cas” exceeds $60 million and is by far the most valuable coin in the world, despite being issued only 10 years ago by a private company.

Casascius, the company created by Mike Caldwell issued physical bitcoins from 2011 to 2013 in various denominations from 0.1 BTC to 1000 BTC (the “Gold Cas”). Over 800 of the 25 BTC denomination coins were produced, and less than half of that remain unredeemed.

Ian Russell, president of GreatCollections said “as expected, there was a significant amount of bidder interest for the most important physical Bitcoin ever to appear in auction. We had new bidders register from 14 countries specifically for the Bitcoin auction, not to mention the interest from the traditional numismatic community.”

It was the second most valuable coin GreatCollections auctioned this year. The finest 1893-S Morgan Silver Dollar realized $2,024,024 in August - an all-time world record for a Morgan dollar. Also in August, GreatCollections reported being the winning bidder for three of the most valuable U.S. coins to ever appear in auction for over $21 million - the finest 1804 Silver Dollar, the tied-for-finest 1794 Silver Dollar, and finest of two known 1861 Paquet Gold Double Eagles.

Total sales for the evening of auctions on Sunday exceeded $5.25 million with over 3,000 certified coins and paper money sold. Other important realizations include:

From the Monet Collection of Carson City Double Eagles

From the Semper Fi Collection of Walking Liberty Half Dollars

Other Highlights from GreatCollections November 14, 2021 Auctions