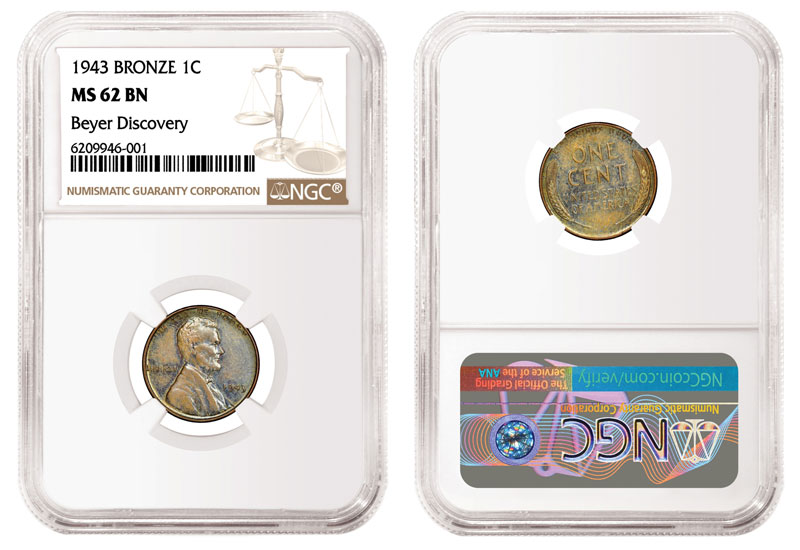 The coin was submitted by Dave & Adam's Card World, a powerhouse in the world of collectible sports cards.

The coin was submitted by Dave & Adam's Card World, a powerhouse in the world of collectible sports cards.

Numismatic Guaranty Corporation® (NGC®) has certified one of the finest examples of the famed 1943 Bronze Cent, an elusive mint error highly prized by coin collectors.


SARASOTA, Fla. (May 13, 2021) — Numismatic Guaranty Corporation® (NGC®) has certified one of the finest examples of the famed 1943 Bronze Cent, an elusive mint error highly prized by coin collectors. The coin was submitted by Dave & Adam's Card World, a powerhouse in the world of collectible sports cards.

In order to save copper for the war effort during World War II, the US Mint was supposed to strike all 1943 Lincoln Cents on zinc-coated steel planchets. However, a few bronze planchets from 1942 are believed to have been lodged in the tote bins that were used by Mint employees to carry the unstruck planchets to the presses that struck the coins. These stray bronze planchets later worked themselves loose, mixing with the steel planchets used to strike the cents.

Not long after the steel cents reached the public, rumors circulated that a major automobile manufacturer was offering a car to anyone who found a 1943-dated cent struck in the wrong metal. This bit of whimsy had an unanticipated effect: In 1947, a Massachusetts teenager reportedly discovered the first example of this spectacular mint error, which is often called a 1943 Copper Cent because the alloy it is made of is predominantly copper.

About two dozen others have come to light, including the one purchased by Dave & Adam's, which is called the Marvin Beyer Discovery Coin after the boy who found it in 1957. In addition to its relatively high grade, it also boasts a stellar bluish toning.

The Beyer Discovery Coin is the first coin purchased by Dave & Adam's. It was in the holder of another grading service and Dave & Adam's submitted it to NGC through its CrossOver service . It is now graded NGC MS 62 BN.

“We think this is an excellent time to leverage the success we have had in collectible sports cards and apply it to rare coins,” said Adam Martin, Co-founder of Dave & Adam’s. “Collectors are highly interested in rarities like these, especially when they know they are authentic and are assured that their grade is accurate, which NGC certification does.”

NGC is part of the Certified Collectibles Group® (CCG®), whose affiliates have certified more than 60 million collectibles since 1987. Other affiliates include Paper Money Guaranty® (PMG®) for banknotes; Certified Guaranty Company® (CGC®) for comic books, magazines, posters and, through its CGC Trading Cards division, Pokémon and Magic: The Gathering cards; and Certified Sports Guaranty™ (CSG™) for sports cards. Dave & Adam’s was one of the first Official Submission Centers for CSG and CGC Trading Cards.