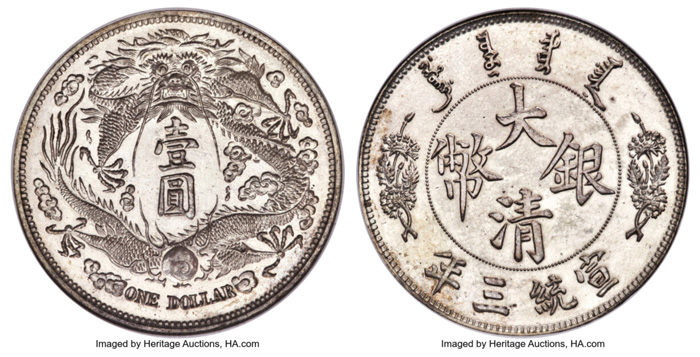 “Asian numismatics have grown in popularity and importance to a rapidly growing community of collectors around the world,” Heritage Auctions Executive Vice President of International Numismatics Cristiano Bierrenbach said. “The items in this exceptional sale mirror the diversity of coinage across the Chinese and broader Asian series.”

Among the most impressive lots is an absolute showstopper: a 180mm People's Republic gold Proof "Year of the Sheep" 100000 Yuan (10 Kilo) 2015, Shenzhen mint, KM-Unl., CC-2011 (estimate: $700,000-900,000). Coins of such extraordinary aesthetic appeal and size rarely make it to market, making this a prized rarity. The offered example belongs to the lunar series, remains one of the most coveted in modern Chinese numismatics since its inception in 1981. Struck to commemorate the Year of the Sheep/Goat, this fantastic 10-kilogram offering, approximately 22 pounds of 99.9% pure gold, features a boldly frosted depiction of an adult ram stoically poised set atop a matte, bas relief rendition of a second ram's head, all hosted by endlessly deep mirrors and Gem Proof appearances.

A Hsüan-t'ung silver Proof Pattern "Long-Whiskered Dragon" Dollar Year 3 (1911) PR63 NGC, Tientsin mint, KM-Pn305, L&M-28, Kann-223a, Chang-CH26, Shanghai Museum-592, WS-0040 var (estimate: $500,000-700,000) is among the most famous Patterns from the end of the Qing Dynasty. The so-called “Long-Whiskered” Dragon Dollars from 1911 represent what is perhaps the culmination of late Imperial art as expressed in a numismatic medium. This beauty is the product of famed Central Mint engraver Luigi Giorgi, who also created many of the most famed designs of the early Republic. It represented a program on the part of the Emperor to unify the national currency, formally abolish the disparate standards of the different provinces, and finally supplant the circulation of foreign silver Dollars that had so long frustrated central Chinese monetary policy.

Also offered is one of just four Mint State-certified examples of a Kiangnan. Kuang-hsü Dollar CD 1898 MS61 PCGS (estimate: $70,000-90,000), none of which has gone to auction in recent years. A major rarity within the Kiangnan Dragon Dollar series, it is from the more challenging of the two “eyeball” varieties for the date, with survivors in Mint State preservation usually being a far cry by all metrics.

Once a part of the R.N.J. Wright Collection, a Kweichow. Republic "Bamboo" Dollar Year 38 (1949) XF45 PCGS (estimate: $300,000-600,000) is from the significantly more rare of the only two Dollar-sized issues produced in the province. The so-called “Bamboo” Dollar represents one of the final types produced prior to the Communist victory in October 1949. Despite having been produced during the turbulent years of the 1940s, the execution of the design does not seem to have suffered in the least from the contemporary political climate.

The sale will include, from the Glorium Collection, a Republic Chang Tso-lin silver Pattern "Mukden Tiger" Dollar Year 17 (1928) MS62 NGC Tientsin mint, KM-Pn90, L&M-871, Kann-688, Chang-CH247 (Rare), Shanghai Museum-694, Shi Jiagan Collection-585, WS-0111, Wenchao-901 (rarity 3 stars), the first of its type ever offered at Heritage Auctions. One of just 10 examples certified across both NGC and PCGS, this coin (estimate: $300,000-500,000) has been available to the public only a handful of times over several decades, which only increases the demand; it is one of those must-have coins that is arguably as famous as the man whose portrait appears on it. One of the most powerful warlords in 1920's China, Chang Tso-lin (Zhang Zuolin) was portrayed on a small series of Patterns from the silver Dollar up to a gold 50 Dollar piece produced during his short-lived hold over Beijing and Tientsin from 1926 to 1928. His coins remain some of the rarest and most highly sought after of all Republican issues, numerous examples of which have been known to have set all-time price records when they came to auction.

World Paper Money
The demand for East Asian banknotes has been on the rise, as shown in Heritage Auctions’ HKINF World Paper Money Signature Auction in June, which brought more than $2.5 million.

“East Asian currency has led the incredible growth in World Banknotes at Heritage,” Heritage Auctions Vice President Dustin Johnston said. “The currency selection in this sale is among our finest offerings for this venue. Even so, there is far more collector demand than available material. Bidders will likely see more competition than our auction in June, and should have a plan of action.”

From the Luminous Slamstone Collection comes a Malaya and British Borneo Board of Commissioners of Currency 1000 Dollars 21.3.1953 Pick 6a B106 KNB6a PMG Extremely Fine 40 (estimate: $50,000+). Malaya, Sarawak, British North Borneo, Brunei and the Straits Settlements were returned to British control, and after King George VI died in 1952, a new currency system was created that encompassed all British Colonies in what is present day Malaysia, Singapore and Brunei. This $1,000 note is the highest denomination that could have been obtained and used by the public; the $10,000 was exclusively used between banks to settle accounts. At the time of circulation, this denomination could be exchanged for roughly 100 British Pounds, making it one of the highest-denomination circulating notes at that time. Extant notes in issued form are very rare, as most are held in institutional or other famous collections. 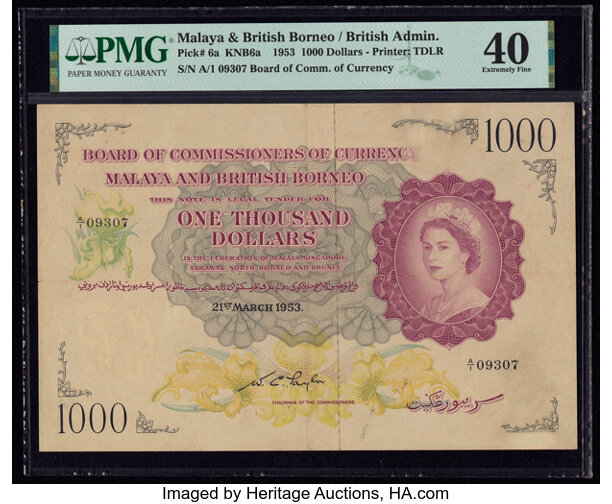 Also offered is a Hong Kong Chartered Bank of India, Australia & China 100 Dollars 2.12.1929 Pick 52cts Color Trial Specimen PMG Gem Uncirculated 66 EPQ (estimate: $50,000+). Starting in 1911, Waterlow & Sons printed banknotes for the Chartered Bank of India, Australia & China and the subsequent Chartered Bank for the better part of five decades, but this extraordinary and important design is missing from many collections. Because of its high denomination, counterfeiters tried to replicate it almost immediately. This design only features two dates, 1929 and 1930, but due to the numerous forgeries with weak watermarks in existence, a completely new design, atop completely watermarked paper, was issued in 1934. Considered an iconic design, this type is very rare in any format.

The finest-graded example in the PMG Population Report of the China People's Bank of China 200 Yuan 1949 Pick 837a2 S/M#C282-51 PMG Superb Gem Unc 67 EPQ (estimate: $25,000+) is from one of six 200 Yuan notes prepared for issue throughout China. The offered note is the first example graded Superb Gem Uncirculated, and as such, the first and best available.

Also from the Luminous Slamstone Collection, a Straits Settlements Government of the Straits Settlements 1 Dollar 1.9.1906 Pick 1a KNB1 PMG Choice Uncirculated 64 EPQ (estimate: $10,000+) is from the first series of Government notes, which were dated 1898, but the $1 denomination was not created until eight years later, in 1906. This example, also from the Luminous Slamstone Collection, is in exceptional condition, far better than that often encountered for notes of this age. When it was cataloged, this note was tied for the second-finest grade in the PMG Population Report.