Coin World has named eight of NGC's experts are included in the latest list of Coin World’s Most Influential People in Numismatics.

SARASOTA, Fla. (September 12, 2022) — Numismatic Guaranty Company™ (NGC®) is thrilled to announce that eight of its experts are included in the latest list of Coin World’s Most Influential People in Numismatics. Established in 1987, NGC is celebrating a number of milestones this year, including its 35th anniversary and 55 million coins certified. 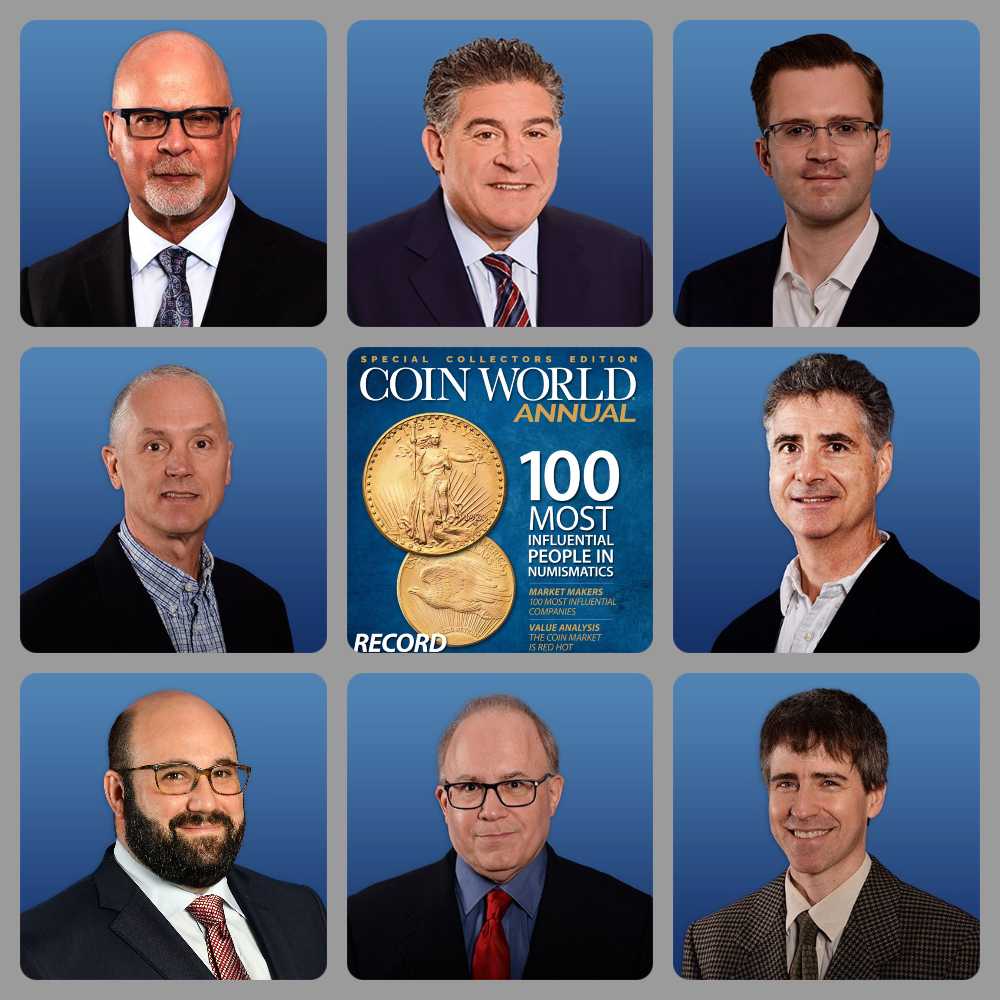 Mark Salzberg, NGC Chairman, is one of the world’s most respected and accomplished numismatists. He is widely credited for his central role in standardizing and promoting the use of today’s highly precise coin grading scale. As a key supporter of the hobby for decades, he was recognized by the American Numismatic Association as Numismatist of the Year in 2006.

Steven R. Eichenbaum has worked to expand the collectibles markets by playing an integral role in virtually all major initiatives of CCG over the last two decades. Under his leadership, CCG has built on NGC’s success by adding other affiliates, including PMG® for paper money certification; CGC® for certification of comic books, trading cards and other collectibles; CSG® for sports card certification; ASG® for stamp certification; and CAG® for provenance preservation.

Max Spiegel is President of CCG, promoted in 2020 from the position of Senior Vice President of Sales and Marketing. Since joining CCG in 2010, Spiegel’s work has included enhancing the CCG companies’ service offerings, developing innovative marketing programs for CCG’s customers and expanding CCG’s reach through the latest technologies, membership expansion and greater presence at events around the world.

Considered by many to be the coin industry’s greatest authenticator, Rick Montgomery has been a professional grader since 1980 and President of NGC since 2002. During his illustrious career, Montgomery has graded many of the world’s greatest rarities. He co-authored the NGC Grading Guide for Modern US Coins and has written numerous articles for the American Numismatic Association.

David J. Camire is an authority on mint errors and modern minting technology and production. In addition to his expertise in coin manufacturing, Camire also specializes in modern Chinese coins. He co-authored 100 Greatest U.S. Error Coins, has contributed to leading numismatic publications and volunteers at the Smithsonian Institution to help preserve the National Numismatic Collection.

Scott Schechter joined NGC in 2005, where he is now Chief Numismatist and Finalizer. At NGC, his primary focus is on the certification of world coins and he works with many dealers and auction houses outside the United States, devoting much of his time to authentication, attribution and grading of vintage non-US coinage. He is a co-author of 100 Greatest US Modern Coins, published in 2010.

The author of ten books on United States numismatics, Lange was honored by the American Numismatic Association with its Lifetime Achievement Award in 2009 and as the Numismatist of the Year in 2017. The Numismatic Literary Guild honored Lange in 2018 with its prestigious Clemy Award. Career highlights include the launching of NGC’s VarietyPlus service.

As part of its 60th anniversary, Coin World published an article in 2021 that highlighted nearly 100 people who dedicated their lives to promoting numismatics. The feature proved so popular with the coin collecting community that Coin World created an updated list this year.

Interested in working alongside NGC’s numismatic leaders? Find out more about available opportunities and apply for a position at CollectiblesGroup.com/careers . NGC offers the most competitive compensation and benefits in the industry.

NGC is the world’s largest and most trusted third-party grading service for coins, tokens and medals, with more than 55 million collectibles certified. Founded in 1987, NGC provides an accurate, consistent and impartial assessment of authenticity and grade. Every coin that NGC certifies is backed by the comprehensive NGC Guarantee of authenticity and grade, which gives buyers greater confidence. This results in higher prices realized and greater liquidity for NGC-certified coins. To learn more, visit NGCcoin.com .