Gem Barber Halves: A Tale of an Avid Collector and His Gem Mint State Set 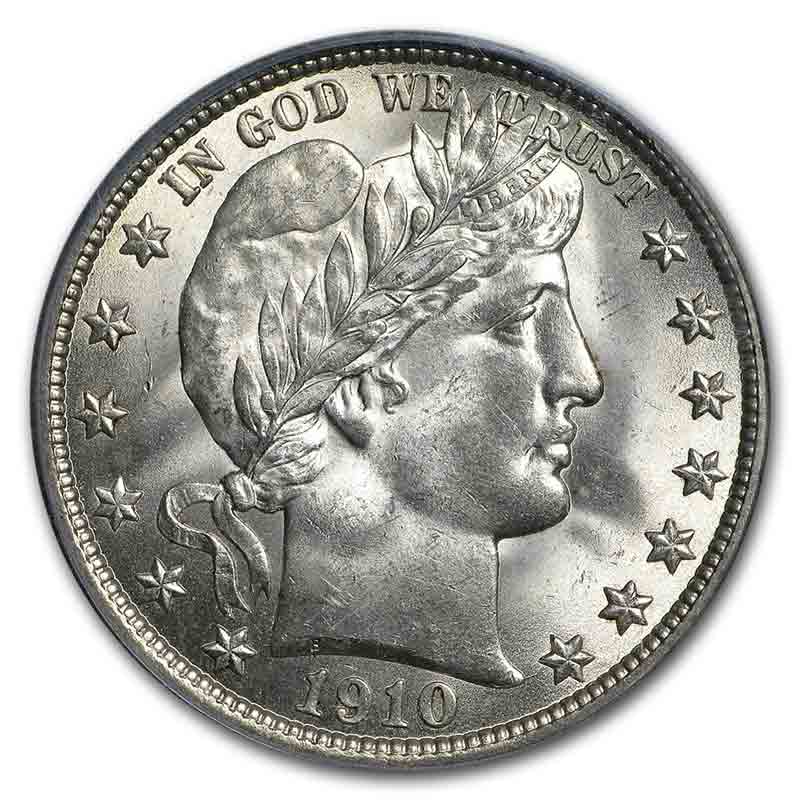 Barber half dollars represent a most interesting and challenging series, particularly in mint state. These coins are large, beautiful, classic, and difficult to find nice in gem and better grades (MS65 and above).

Barber half dollars represent a most interesting and challenging series, particularly in mint state. These coins are large, beautiful, classic, and difficult to find nice in gem and better grades (MS65 and above). In this article I will relate my experience and great delight in collecting Barber half dollars. Whether selected as a single type coin, collected by one-per-year, one-per mint of origin, or as a complete set with all mint marks, gem Barber halves are amazingly beautiful coins. Before I begin taking you on this journey, I want to acknowledge my wife, Janice, as she has been my greatest supporter and helped me along the way.

The Start
My interest in coins began around 1968 when I was 10 years old. A limited budget had meant I collected what I could afford: rolls of uncirculated Lincoln Memorial cents, circulated Buffalo nickels, Indian cents, Lincoln cents, you get the picture. Twice I bought 20th Century type sets in framed holders with glass fronts harboring higher grade Barber halves, as I remember, Extra Fine to About Uncirculated. When I would share these sets with other collectors, the immediate response was, “will you sell that Barber half?” Clearly high-grade examples were difficult to find. These events had a deep impact on my appreciation for the rarity of higher grade Barber half dollars. One can find thousands of Barber halves in AG to G grade, but uncirculated examples are very scarce.

In 1993 I had the opportunity to obtain a coin that had eluded me from my early days of coin collecting. It was a mint state Barber half dollar. Even though this particular coin was a common date 1892 graded MS 64, it was so beautiful! This was a significant moment for me. I derived great joy studying that coin and seeing the amazing detail on a coin that is usually found completely worn flat.

Expanding the Set
Once I had a type coin example, it was not long before I came up with a plan. I decided to put together a set of Barber halves in mint state over a three to five year period. I would target certified examples grading MS63 to MS64. Having completed medical school and residency in Pathology, I had a paying job. Little did I know what a delightful time was in store. I would go through several changes in direction during my journey. My time devoted to this wonderful hobby was great fun, and I am very glad I have done so. Collecting coins is the greatest hobby in the world.

I would spend countless joyful hours tracking sales in ads such as in Coin World, and in major auctions. I would travel to coin shows, coin shops and meet very interesting dealers. I would pore over auction catalogs and there were some significant sales of these coins during the 22 years I worked on my set. The Pryor auction came and went. I ended up buying the 1892-O Micro O in AU55 from that set. The Eliasberg sale came up and all coins were raw. At that point I was not yet buying superb gems; I did not attend the auction. I saw that the 1904-O in MS 66 was on offer, and I bought it soon after the sale. It remains in the collection as a centerpiece coin.

It would turn out that I would switch from collecting MS 63-64 to MS 65-67 coins, but that didn’t happen overnight. This switch would require more searching, more money, therefore more time. Never did I lose my drive to search out and hunt for upgrades and better coins. So much enjoyment is from the hunt, the analysis, and in the people you meet. I would meet the great collectors, Dr. Steven Duckor and Dale Friend. What a treat to have other avid collectors to discuss coins and play show-and-tell with. Another great source of fun is finding pedigrees for coins. Poring over older auction catalogs is a way to go back in history. So many of the extant high-end coins available now came from a few early collectors who picked up coins directly from the mint when issued. Barber half dollars are big coins and represented a lot of money for most people in the years they were issued. Collecting them was not popular when they were released – in part due to the face value of the coin – and many were not saved when issued.

Getting an Agent
I went it alone when first choosing coins, but soon realized that having a dealer to represent me to view coins was a wise idea. Having dealt with a number of dealers, I was impressed with Harry Laibstain. After some initial purchases, we developed a wonderful relationship that exists to this day. We would find coins at auction that were possible upgrades to the set. Some were nice enough to add to the set, others not. A serious collector cannot underestimate the value of a knowledgeable agent. The majority of coins acquired to upgrade this set to its exalted status was done via this agent partnership. I was able to get average coins out of the set and premium quality coins in. In addition, having an agent also helped me to understand what sets an average coin apart from an amazing coin. Many experienced dealers and collectors have commented how nice my coins are for their grade. John Albanese at CAC said the same thing after reviewing them for stickers. He said that grading the collection was very satisfying, and the coins were exceptional.

Generally I would pick up a coin or two every few months, but once the set became more mature, the upgrades were slower. The biggest addition came with coins from the magnificent Hugon Collection auctioned in 2005. Nine of the 73 coins in my mint state set came from this one auction; these are all very nice coins. When it came time for the Friend and Duckor sets to be sold at auction, we were there, and bought coins. A particularly great moment was when my wife grabbed the bidding paddle from my hand and bought the Duckor 1907 in MS67+, and she did it with a cut-bid! Adding to that, a previous owner of the coin notified me where the coin came from. A former judge in the Pacific Northwest had the coin in his collection since the 1930’s, somehow randomly saved in an old brown envelope. I love contemplating how coins like this get saved. In this instance my 1907 half is the finest known survivor of the issue.

It was amazing the day I figured out my 1904-S half was the Norweb coin. Knowing my coin’s history going back to 1955 was a spectacular revelation. Other coins were recognized by prominent dealers along the way, including discovery that the 1894-S and 1912-S coins were from the Eliasberg Collection (Ron Guth). In getting my set ready for auction, it was further discovered that the 1896-O is from the Norweb collection (Mark Borckardt). The amazing Eliasberg collection is represented in my set by four coins: 1894-S, 1901-O, 1904-O, and 1912-S. Another important pedigree for me is the 1897-O previously owned by Abe Kosoff. Mr. Kosoff was a very important numismatist, and this is an outstanding coin from his personal collection. Pedigrees from collections of note are highly desirable additions; they add value for advanced collectors.

Being an avid collector and numismatist, I also was honored to author articles for publications including this publication, The Barber Collector’s Society, and Harry Laibstain’s web site. I thought about writing a book, but others have already done so. My descriptions of coins in my set on the PCGS registry provides a lot of information from my journey assembling this collection. I have viewed the collection at the Smithsonian and studied the Barber halves including the pattern coins. The Smithsonian is open to all citizens who wish to go study there. Simply make an appointment; they will let you examine any coins in the collection. The recent publication of A Guide Book of Barber Silver Coins by Q. David Bowers published by Whitman Publishing Company is superb and may well spark additional interest in the Barber coin series. Several of the coins from my set are featured as plate coins including the Norweb 1896-O. Coincidentally, this coin was purchased by me directly from Mr. Bowers.

I will soon be selling my set. It will be a bit sad to part with my “children”. At the end of 2015 numismatists have a situation that is nothing short of amazing as far as gem Barber halves go. The recent sales of the duplicates of the Gardner Collection, the Greensboro Collection sold in mid to late 2015, and my collection to be sold by Heritage at the FUN show in January, 2016, means an incredible number of premium gem Barber half dollars have come to market in a very short time. Anyone wanting one or more terrific gem Barber half dollars has a great selection of some very choice and rare coins.

This is a golden opportunity for collectors wishing to start a nucleus of a new collection, or to solidify the position of collectors whose collections are already underway. I sincerely hope that some of my “children” +make it into new sets with collectors as avid as me. Mark Borckardt at Heritage Rare Coin Auctions is cataloging my set. He stated in an email to me, “It is a pleasure working on your set. The coins truly are amazing and I am trying to do justice with my descriptions.” The table shows my favorites in the set with pedigrees and rankings.

I know everyone has their favorite coins, but gem Barber half dollars are big beautiful coins and deserve consideration as a series to collect in Gem uncirculated condition. These rare coins have a lot to offer collectors. They have a diversity of years, and mints where struck. Barber half dollars hearken to a time in our country’s past when a silver 50 cent piece was a lot of money and few were saved as collectibles. I have had a fabulous time putting my set together in the twenty-two years I have collected, and have benefited greatly from my time and effort put forth in my pursuit of a complete set of gem Barber half dollars. I am an avid collector and numismatist at heart and there is no doubt I will be collecting more great coins.

What is next for me? That’s the big question. Perhaps another Barber series, or perhaps Barber halves again, but this time in proof.