The final month of 2017 is an exciting month for the Panda coin market, which the launch of the 2018 issues. The 2018 gold and silver Panda design features an “up-close 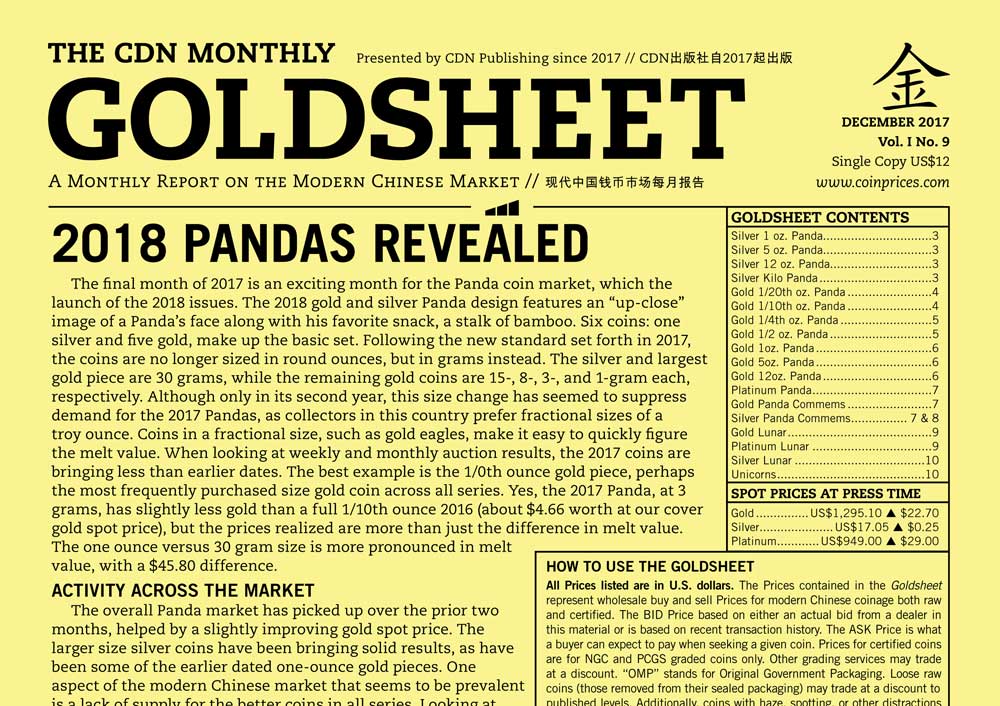 The final month of 2017 is an exciting month for the Panda coin market, which the launch of the 2018 issues. The 2018 gold and silver Panda design features an “up-close” image of a Panda’s face along with his favorite snack, a stalk of bamboo. Six coins: one silver and five gold, make up the basic set. Following the new standard set forth in 2017, the coins are no longer sized in round ounces, but in grams instead. The silver and largest gold piece are 30 grams, while the remaining gold coins are 15-, 8-, 3-, and 1-gram each, respectively. Although only in its second year, this size change has seemed to suppress demand for the 2017 Pandas, as collectors in this country prefer fractional sizes of a troy ounce. Coins in a fractional size, such as gold eagles, make it easy to quickly figure the melt value. When looking at weekly and monthly auction results, the 2017 coins are bringing less than earlier dates. The best example is the 1/0th ounce gold piece, perhaps the most frequently purchased size gold coin across all series. Yes, the 2017 Panda, at 3 grams, has slightly less gold than a full 1/10th ounce 2016 (about $4.66 worth at our cover gold spot price), but the prices realized are more than just the difference in melt value. The one ounce versus 30 gram size is more pronounced in melt value, with a $45.80 difference.

ACTIVITY ACROSS THE MARKET

The overall Panda market has picked up over the prior two months, helped by a slightly improving gold spot price. The larger size silver coins have been bringing solid results, as have been some of the earlier dated one-ounce gold pieces. One aspect of the modern Chinese market that seems to be prevalent is a lack of supply for the better coins in all series. Looking at most of the popular online auction sites, the same handful of dates and sizes are traded often, but many of the gold and silver Lunar coins and Panda commemoratives are not found. Of course, these are traded privately between dealers and between dealers and collectors, but it is clear that many of these low-mintage pieces are locked up in sets. This bodes well for those collectors who purchased such pieces on release. When these pieces are sold at auction they should bring strong money. A good example of this is a lot in the upcoming Heritage Hong Kong auction (lot #37277) in which a group of 10 half ounce gold Fan shaped Lunar coins, all graded NGC PF69 Ultra Cameo and dated from 2000-2009. The estimate is $10,000 to $12,000, and this lot is worth watching as a bellwether.