The Stack’s Bowers auction held in conjunction with the 3rd Hong Kong Coin Show garnered more than $4.2 million (all values in US$) in prices realized across the paper 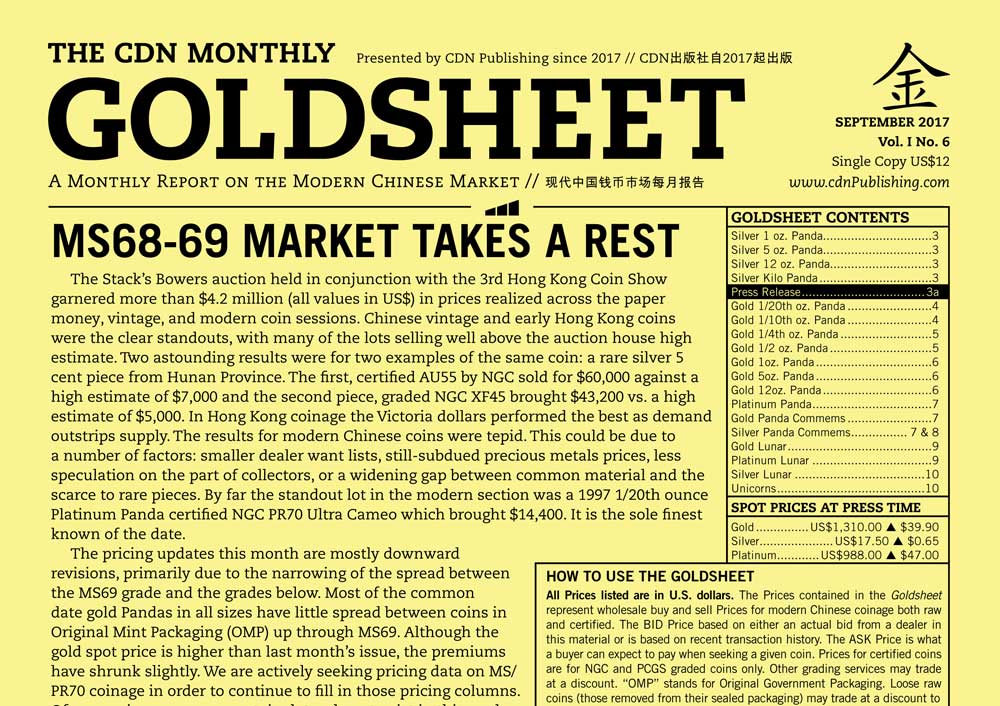 The Stack’s Bowers auction held in conjunction with the 3rd Hong Kong Coin Show garnered more than $4.2 million (all values in US$) in prices realized across the paper money, vintage, and modern coin sessions. Chinese vintage and early Hong Kong coins were the clear standouts, with many of the lots selling well above the auction house high estimate. Two astounding results were for two examples of the same coin: a rare silver 5 cent piece from Hunan Province. The first, certified AU55 by NGC sold for $60,000 against a high estimate of $7,000 and the second piece, graded NGC XF45 brought $43,200 vs. a high estimate of $5,000. In Hong Kong coinage the Victoria dollars performed the best as demand outstrips supply. The results for modern Chinese coins were tepid. This could be due to a number of factors: smaller dealer want lists, still-subdued precious metals prices, less speculation on the part of collectors, or a widening gap between common material and the scarce to rare pieces. By far the standout lot in the modern section was a 1997 1/20th ounce Platinum Panda certified NGC PR70 Ultra Cameo which brought $14,400. It is the sole finest known of the date.

The pricing updates this month are mostly downward revisions, primarily due to the narrowing of the spread between the MS69 grade and the grades below. Most of the common date gold Pandas in all sizes have little spread between coins in Original Mint Packaging (OMP) up through MS69. Although the gold spot price is higher than last month’s issue, the premiums have shrunk slightly. We are actively seeking pricing data on MS/PR70 coinage in order to continue to fill in those pricing columns. Of course, in some cases certain dates do not exist in this grade.

This year marks the 35th anniversary of the Panda coin series, and the China Mint is commemorating this milestone with the issuance of three new Pandas. The first is a .999 silver 15 gram (a bit less than ½ troy ounce) 5 Yuan coin which is 33 millimeters and has a mintage of 200,000 pieces. Next is a .999 gold 5 gram 80 Yuan coin that measures 20 millimeters and has a mintage of 50,000. The final new issue is bimetallic with a large 45 millimeter diameter that features an outer ring of 12 grams .999 silver with a center of 30 grams .999 gold. The face value is 500 Yuan and carries a low mintage of 6,000 coins. The outer silver ring of the coin details Panda images from previous years, creating a nice impression.