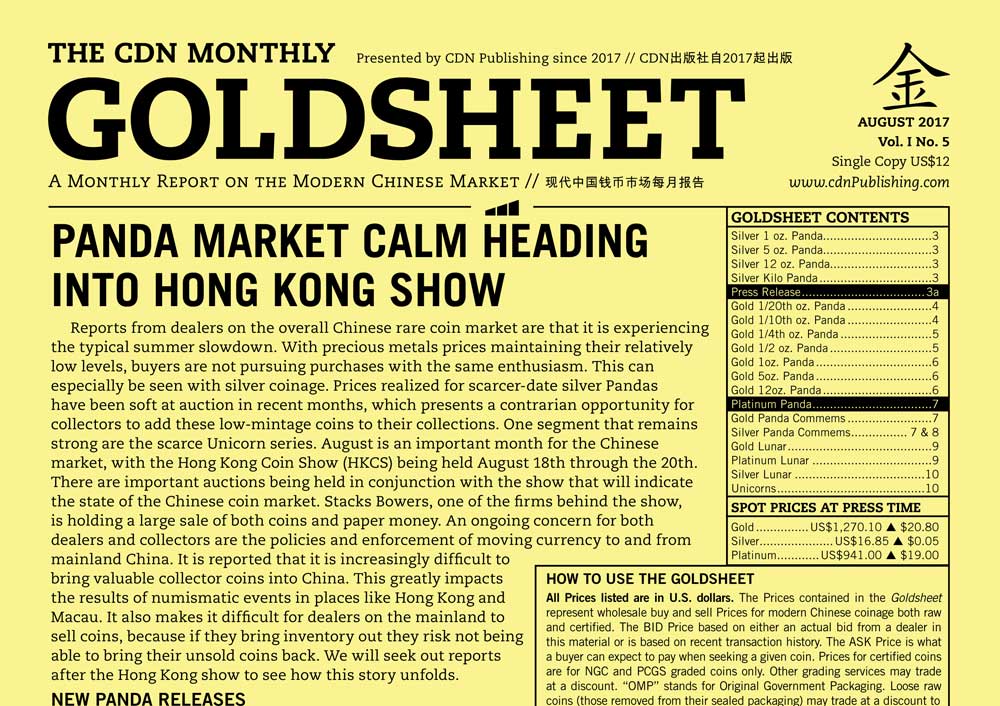 Reports from dealers on the overall Chinese rare coin market are that it is experiencing the typical summer slowdown. With precious metals prices maintaining their rela

Reports from dealers on the overall Chinese rare coin market are that it is experiencing the typical summer slowdown. With precious metals prices maintaining their relatively low levels, buyers are not pursuing purchases with the same enthusiasm. This can especially be seen with silver coinage. Prices realized for scarcer-date silver Pandas have been soft at auction in recent months, which presents a contrarian opportunity for collectors to add these low-mintage coins to their collections. One segment that remains strong are the scarce Unicorn series. August is an important month for the Chinese market, with the Hong Kong Coin Show (HKCS) being held August 18th through the 20th. There are important auctions being held in conjunction with the show that will indicate the state of the Chinese coin market. Stacks Bowers, one of the firms behind the show, is holding a large sale of both coins and paper money. An ongoing concern for both dealers and collectors are the policies and enforcement of moving currency to and from mainland China. It is reported that it is increasingly difficult to bring valuable collector coins into China. This greatly impacts the results of numismatic events in places like Hong Kong and Macau. It also makes it difficult for dealers on the mainland to sell coins, because if they bring inventory out they risk not being able to bring their unsold coins back. We will seek out reports after the Hong Kong show to see how this story unfolds.

We write this from the American Numismatic Association World’s Fair of Money, which this year features not one but two different Panda medal issues. There is a long tradition of special-edition Pandas produced for the World’s Fair of Money which goes back to 1986. On Tuesday, August 1, Panda America released a Panda medal which was available in a 30 gram silver version and a tri-metallic version consisting of copper, brass, and copper-nickel. The mintage for both pieces is 888. The coin firm Modern Coin Mart had both a one ounce silver and one ounce gold Panda medal which were available in limited numbers at the show. The mintage for the silver version is 5,000 and the mintage of the gold version is 188 pieces. Both medals were produced at the Shanghai facility of the China Mint.