Gorgeous Gold Coin Bridges the Gap Between Art and Numismatics

Many collectors and art enthusiasts have heard the story about how President Teddy Roosevelt so hated the coin designs that were in circulation during his day that he wrote to Treasury Secretary Shaw "I think our coinage is artistically of atrocious hideousness." 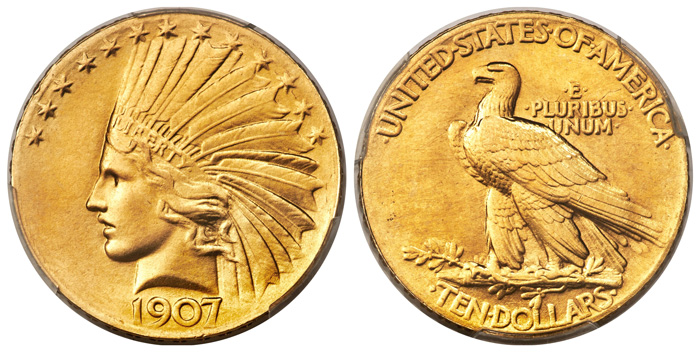 Many collectors and art enthusiasts have heard the story about how President Teddy Roosevelt so hated the coin designs that were in circulation during his day that he wrote to Treasury Secretary Shaw "I think our coinage is artistically of atrocious hideousness." Determined to change what he felt was unacceptable for a great country, President Roosevelt sought out artist Augustus St. Gaudens to design a series of gold coins that would meet his strict standards for beauty and quality. The outcome of this project was two of the most celebrated coin designs in US History--the $10 Indian and $20 "St. Gaudens" that honors the artist in its name.

Heritage Auctions will be offering a lovely Wire Rim $10 Indian coin, graded PCGS MS65, as part of the September Long Beach Auction 1334. This special piece was created during the first year that the new St. Gaudens designs were issued to the public, but this version was struck only in small quantities. Only 500 coins were believed to have been produced, based on a letter written by coin dealer Henry Chapman in 1908. Not only were these coins created in small quantities, but they are beloved as the first year of issue for the type and a gorgeous, artistic design. The Wire Rim issues were struck in 1907, along with the ever-rarer Rolled Rim variety (less than 100 made) and significantly more common No Periods version (a large 239,406 made.)

These coins tend to command spirited bidding from collectors who look forward to owning such a popular, attractive coin. A similar piece sold recently for around $60,000, and this example will be a highlight of the upcoming sale, where the current hot market could quite possibly push the price even higher than previous examples!