Before 1971, proof coins made at the U.S. Mint were produced with dies that were chemically etched or sandblasted to impart a frosted finish on the devices.

Before 1971, proof coins made at the U.S. Mint were produced with dies that were chemically etched or sandblasted to impart a frosted finish on the devices.

Before 1971, proof coins made at the U.S. Mint were produced with dies that were chemically etched or sandblasted to impart a frosted finish on the devices. To give the fields a mirrored finish, the flat areas of the dies were polished to a mirror-smooth consistency. Unfortunately, a set of proof dies only produced about a hundred coins with cameo contrasting devices and mirrored fields.

As the dies continued to be used, the devices that once had a frosted finish slowly eroded due to the friction of the striking process until the entire coin had a brilliant mirrored finish. Coins with a high degree of cameo contrast are especially prized by collectors of early-proof coins. In order to obtain a cameo designation, both sides of the coin must have cameo contrast. If one side of the coin has a "deep cameo" and the other side only has a "cameo," then the coin will receive a "cameo" designation. "Deep cameo" may also be referred to as "ultra cameo". 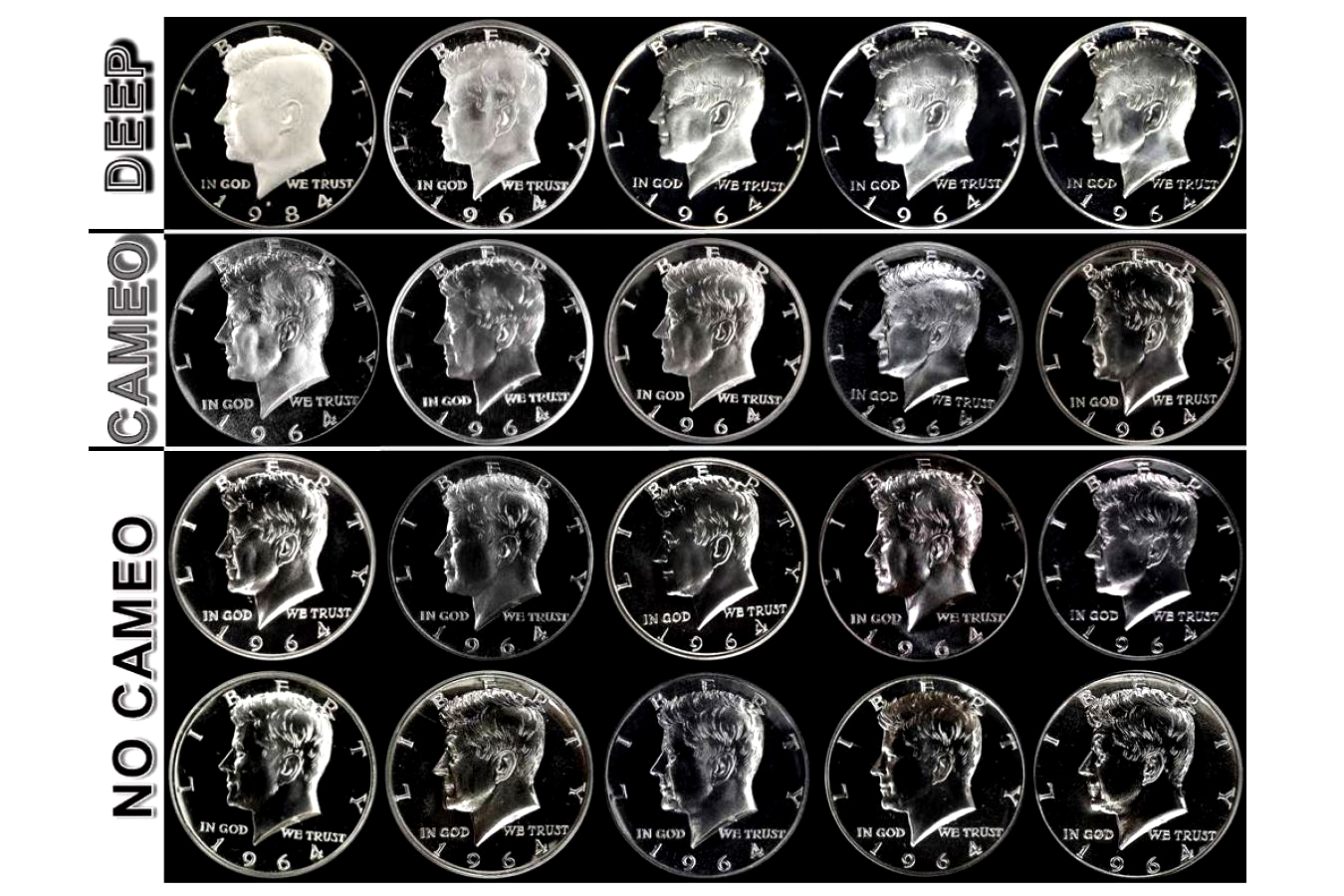 The "Deep Cameo +" (or "Deep Cameo ") designation is only given to coins that exhibit a strong and intense frosted finish on the devices and have excellent eye appeal. This exceptional frosted finish on the devices is only seen on the first few coins that a new set of proof die produces. Third-party grading services may indicate this with a "+" or "" (star) on the overall grade assigned to the coin.

To receive a "Deep Cameo" (or "Ultra Cameo") designation, a coin must exhibit strong and unbroken frosted devices on both the obverse and the reverse. A robust contrast between the mirrored fields and frosted devices must be consistent and undiminished in all areas. Even the smallest amount of brilliance or fade in the recessed areas of the design will prevent a coin from obtaining this designation.

For a coin to receive a "Cameo +" (or "Cameo ☆") designation all the devices on the coin must exhibit a light to moderate frosting on both sides of the coin. The recessed areas of the coin will display the same amount of frosting without any breaks or reflective patches of brilliance.

Coins that exhibit a light to moderate frosting of all the devices will receive a "Cameo" designation. There may be minimal areas on the devices where the frosting fades and reflects light as brilliant. The coin may still qualify for cameo designation if it does not significantly impact the coin's eye appeal. Both sides must have adequate levels of frosting to be eligible for this designation.

Coins with large patches of brilliance on the devices or the entire surface (including the devices) have a brilliant mirrored finish classified as "brilliant proof." Grading services usually indicate this designation by not including a suffix of "Cameo," "Deep Cameo," or "Ultra Cameo."

To help you compare and discern the differences between the levels of Cameo contrast, I have prepared a reference sheet that illustrates the three basic categories of cameo contrast on 1964 Proof Kennedy half dollars. The same concepts can be applied and other proof coins. However, the best way to learn how to grade cameo contrast is to study certified proof coins in person.

Thank you for this explanation of the different “cameo” looks and designations! I am a new collector and have been drawn to the cameo coins from day one. I have purchased several of these coins in Eagles and Kennedy halves, so now I have a reference point and will pay much more detailed attention to the differences in my future purchases. Many thanks!