By Patrick Ian Perez, Editor Hot on the heels of the bustling ANA World’s Fair of Money auction activity came a pair of currency sales conducted by Heritage Auctions a 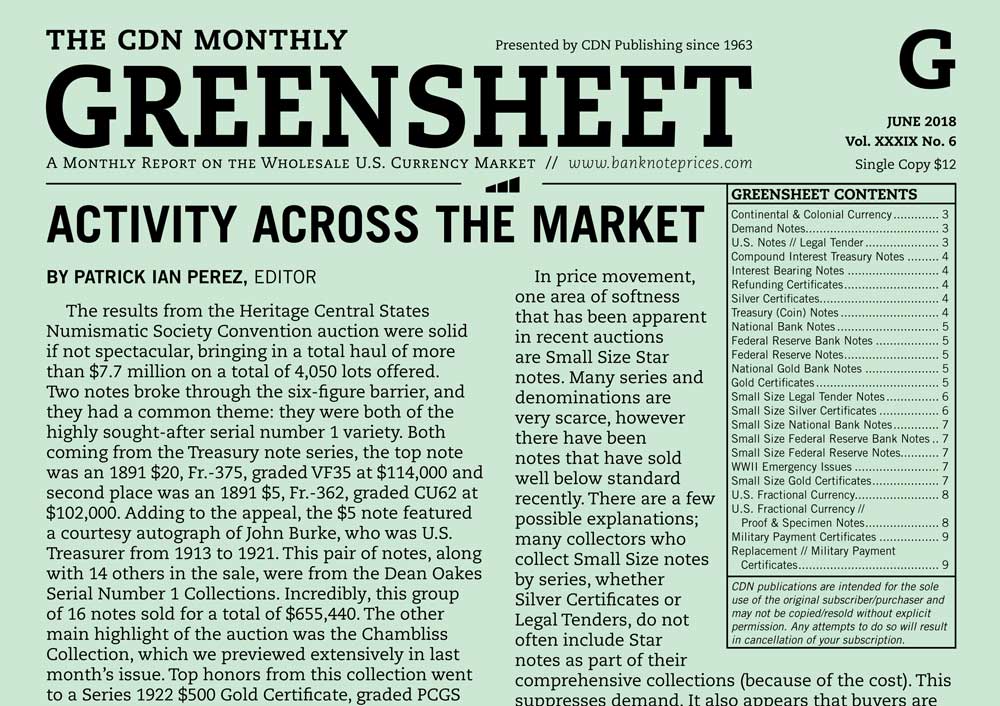 By Patrick Ian Perez, Editor
Hot on the heels of the bustling ANA World’s Fair of Money auction activity came a pair of currency sales conducted by Heritage Auctions at the Long Beach Expo. The United States currency sale took in $4.64 million while the world currency sale brought another $2.74 million. The sale topper was a 1902 Red Seal $50 National on the National Bank of Rochester, New York, serial number one. This note, graded PMG XF40, sold for $66,000.
Remarkably, the remaining four lots that rounded out the top five were also serial number one Nationals, all from the city of San Diego. This famous quartet has been included in some of the most famous currency collections ever, including Grinnell, Carter, Jr., and Krakover. In a positive development, these pieces for the most part bucked the recent trend of rare Nationals selling for below their previous prices realized. The 1882 $20 Brown Back from the Consolidated National Bank garnered $60,000, having previously sold in February 2000 for $27,500, a healthy 118% appreciation. The 1902 $10 Red Seal from the National Bank of Commerce sold for $54,000 while the 1902 $5 from the United States National Bank sold for $40,800 after previously bringing $29,900 at this same sale in 2011. Not all was perfect though as the 1882 $5 Brown Back from the First National Bank of San Diego sold for $42,000 having previously fetched $76,375 in January 2016. Such is the highly variable market for National banknotes.
Looking at other areas of the United States currency market, there certainly seems to be less of an emphasis on super–high-grade certified notes from collectors. If one were to graph auction records of small–size silver certificates and legal tenders in the 66 and 67 grades, the slope would show downward movement over the past three years. It is difficult to pinpoint a single reason for this trend, but there are a few possible explanations. Current supply may be outpacing demand; collectors building sets of high–grade notes may already have what they need and dealers are not willing to stock quantities of super-high–grade certified notes. Market timing is also playing a role in realized prices. While this may seem obvious, over the past few years we have seen an interesting repetitive arc. The market starts out strong – the January FUN auctions, February Long Beach, the first Baltimore sales – only to slowly decline toward the end of the year, then pick back up with the turn of the calendar. This could be a function of budgeting, but it certainly presents opportunity. It also raises some questions. Are there too many United States currency auctions on an annual basis? Is there enough promotion being done by the dealer community to help people build their collections? These are things to think about heading into 2019.
Colonial Currency Project
We are excited to announce that we have embarked on a long-term project in the pricing of Colonial currency. We have long wanted to expand our pricing beyond the “type” note prices that have been listed in this publication for many years, and we now have the infrastructure to do it. As a result, we plan to price every Continental and State note as listed by Newman and assigned Friedberg numbers across the full grade spectrum. This is especially relevant with the recent sale of the Newman Collection, as it held numerous examples of notes that virtually never trade, giving many data points we did not have before. As dealers and collectors of these series know, many of the listed early notes are either non-existent or are extremely rare and thus will not be priced. For other rare notes that do have sales history we will price the note only in the grade(s) in which its known.
It is also important to understand that a significant number of Colonial notes have problems due to their age and the fragility of the paper on which they were printed. To many, this actually adds to the charm of collecting them, as their primitive nature speaks to the beginning of our nation. Practically speaking, this requires that these notes are priced in a different manner to Federal currency. Generally, if a Federal note – whether large or small size – has a problem (a tear, restoration, graffiti, pinholes, etc.) they are discounted in their price, usually one grade lower or more. When it comes to all but the most common Colonial notes, collectors must accept a certain amount of problems in order to form comprehensive collections, and the pricing should take this factor into account. Therefore, our wholesale pricing makes this a necessary adjustment. The progress of this pricing project can be tracked via our online price guide at www.banknoteprices.com.
We are also looking at the feasibility of producing an annual printed publication which would contain these comprehensive price listings. If you are a Colonial currency specialist or expert and would like to provide input, please send us a message at editor@greysheet.com.
|  Tags: ANA, auction news, auction results, Auctions, greensheet, market commentary, market news, Patrick Ian Perez