By the time the first Greysheet was published as the National Coin Brokers Bulletin, the United States had come out of the Great Depression, gone through the war years, 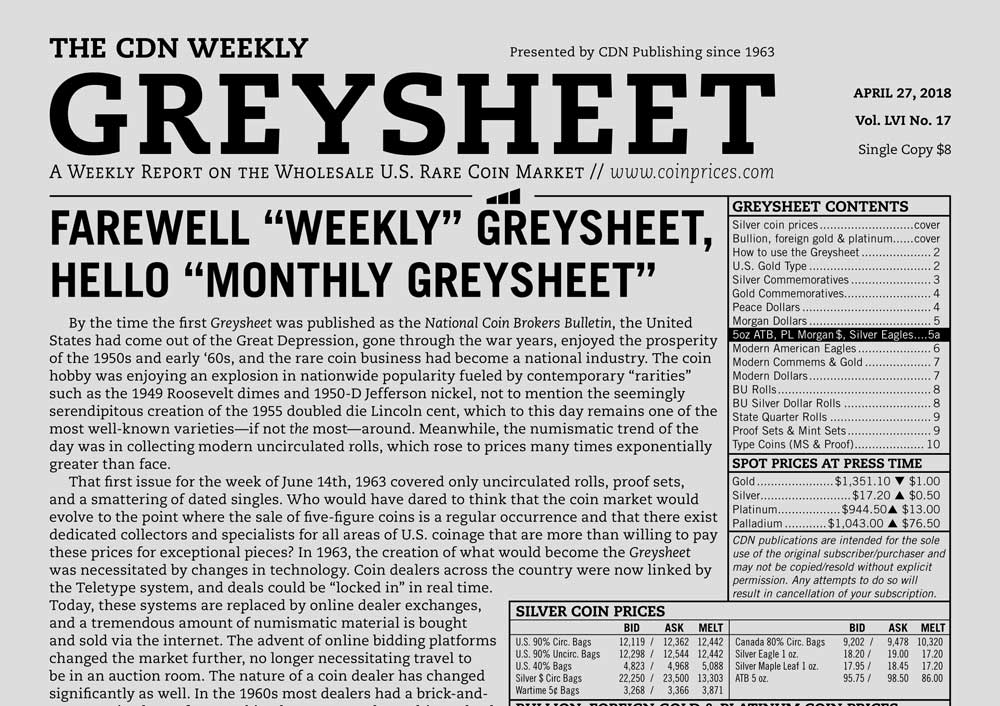 By the time the first Greysheet was published as the National Coin Brokers Bulletin, the United States had come out of the Great Depression, gone through the war years, enjoyed the prosperity of the 1950s and early ‘60s, and the rare coin business had become a national industry. The coin hobby was enjoying an explosion in nationwide popularity fueled by contemporary “rarities” such as the 1949 Roosevelt dimes and 1950-D Jefferson nickel, not to mention the seemingly serendipitous creation of the 1955 doubled die Lincoln cent, which to this day remains one of the most well-known varieties—if not the most—around. Meanwhile, the numismatic trend of the day was in collecting modern uncirculated rolls, which rose to prices many times exponentially greater than face.

That first issue for the week of June 14th, 1963 covered only uncirculated rolls, proof sets, and a smattering of dated singles. Who would have dared to think that the coin market would evolve to the point where the sale of five-figure coins is a regular occurrence and that there exist dedicated collectors and specialists for all areas of U.S. coinage that are more than willing to pay these prices for exceptional pieces? In 1963, the creation of what would become the Greysheet was necessitated by changes in technology. Coin dealers across the country were now linked by the Teletype system, and deals could be “locked in” in real time. Today, these systems are replaced by online dealer exchanges, and a tremendous amount of numismatic material is bought and sold via the internet. The advent of online bidding platforms changed the market further, no longer necessitating travel to be in an auction room. The nature of a coin dealer has changed significantly as well. In the 1960s most dealers had a brick-and-mortar coin shop, often combined as a stamp shop. This evolved into the 1980s when many shops sold coins, stamps, and sports cards. Now, in 2018, many dealers operate without a storefront— indeed the largest dealers in the United States by dollar volume do not have them. Such dealers make their living by being a specialist in one specific series and others are more multi-dimensional than ever, dealing in U.S. coins, world coins, paper money, and even tokens.

All throughout these market changes, the Greysheet remained the constant companion for coin dealers. In due course CDN created new publications, to expand its pricing coverage. The last “new” product launched was in 1992 with the Quarterlies. Today, operating the coin market requires more information, and to deliver this we have created the all-in-one Monthly Greysheet, consolidating seven publications into one. We look forward to continually improving this new publication, in order to deliver the most pricing information possible.

Recommended addition to Greysheet..... GSA Morgan Dollars. I know they are in Bluesheet, but would be nice to see Greysheet prices.