GREYSHEET: IS GOLD READY TO POP?

Gold was primed to have a breakout week, as it had jumped from $1,260 at the beginning of the month all the way up to $1,293 on June the 6th. A number of events had con 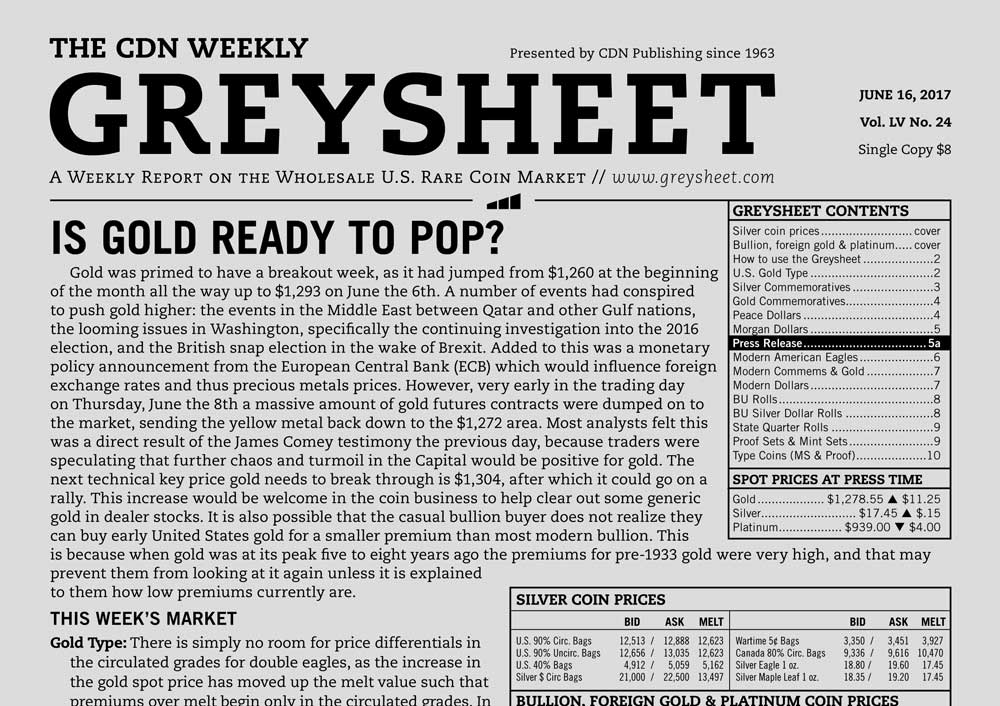 GREYSHEET: IS GOLD READY TO POP?

Gold was primed to have a breakout week, as it had jumped from $1,260 at the beginning of the month all the way up to $1,293 on June the 6th. A number of events had conspired to push gold higher: the events in the Middle East between Qatar and other Gulf nations, the looming issues in Washington, specifically the continuing investigation into the 2016 election, and the British snap election in the wake of Brexit. Added to this was a monetary policy announcement from the European Central Bank (ECB) which would influence foreign exchange rates and thus precious metals prices. However, very early in the trading day on Thursday, June the 8th a massive amount of gold futures contracts were dumped on to the market, sending the yellow metal back down to the $1,272 area. Most analysts felt this was a direct result of the James Comey testimony the previous day, because traders were speculating that further chaos and turmoil in the Capital would be positive for gold. The next technical key price gold needs to break through is $1,304, after which it could go on a rally. This increase would be welcome in the coin business to help clear out some generic gold in dealer stocks. It is also possible that the casual bullion buyer does not realize they can buy early United States gold for a smaller premium than most modern bullion. This is because when gold was at its peak five to eight years ago the premiums for pre-1933 gold were very high, and that may prevent them from looking at it again unless it is explained to them how low premiums currently are.

Market activity in this bellwether series has been strained recently. The levels at which coins have been trading have been coming down, and we have responded to these results. Common date MS65 dollars are now set at $125, down from $150. This narrows the spread between sight-seen and sight-unseen levels. Additionally, with certain dates the premium which CAC stickered examples trade for over non-CAC coins has decreased, which is an interesting phenomenon. We are also examining the concept of breaking out CAC pricing for this series, much like we’ve done for 20th Century gold issues, so we can more reliably reflect the market.

I would like single copy of the grey sheet.