GREYSHEET: LONG BEACH DOES NOT DISAPPOINT

By all accounts the Long Beach Expo was a successful and robust show, and could signal a turning point for the rare coin market for the rest of 2018. We heard from mult 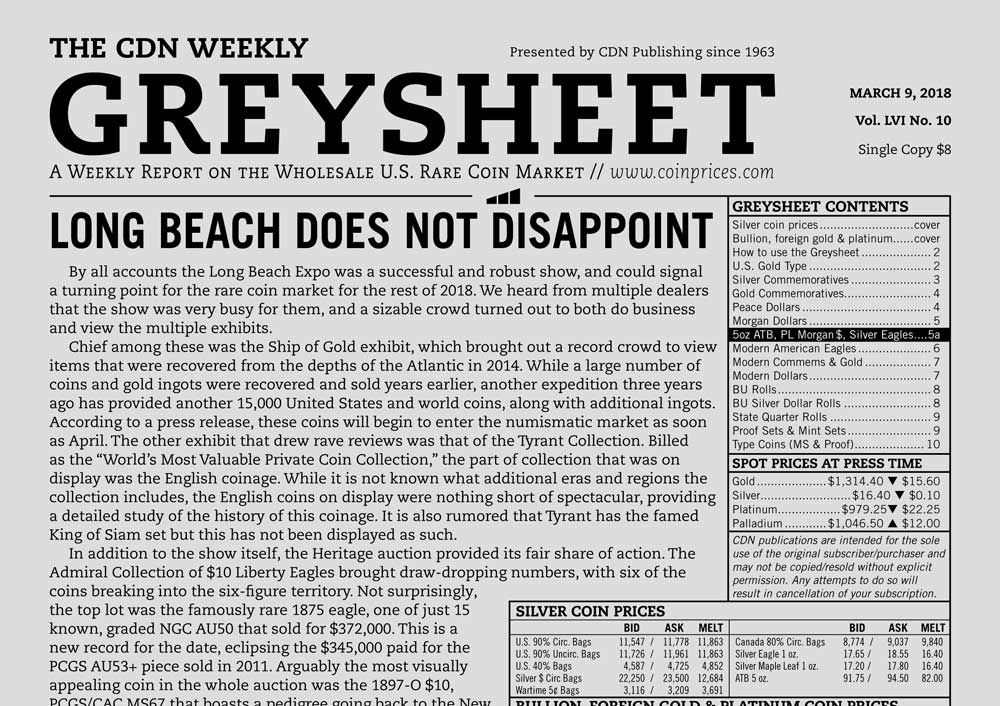 GREYSHEET: LONG BEACH DOES NOT DISAPPOINT

By all accounts the Long Beach Expo was a successful and robust show, and could signal a turning point for the rare coin market for the rest of 2018. We heard from multiple dealers that the show was very busy for them, and a sizable crowd turned out to both do business and view the multiple exhibits.

Chief among these was the Ship of Gold exhibit, which brought out a record crowd to view items that were recovered from the depths of the Atlantic in 2014. While a large number of coins and gold ingots were recovered and sold years earlier, another expedition three years ago has provided another 15,000 United States and world coins, along with additional ingots. According to a press release, these coins will begin to enter the numismatic market as soon as April. The other exhibit that drew rave reviews was that of the Tyrant Collection. Billed as the “World’s Most Valuable Private Coin Collection,” the part of collection that was on display was the English coinage. While it is not known what additional eras and regions the collection includes, the English coins on display were nothing short of spectacular, providing a detailed study of the history of this coinage. It is also rumored that Tyrant has the famed King of Siam set but this has not been displayed as such.

In addition to the show itself, the Heritage auction provided its fair share of action. The Admiral Collection of $10 Liberty Eagles brought draw-dropping numbers, with six of the coins breaking into the six-figure territory. Not surprisingly, the top lot was the famously rare 1875 eagle, one of just 15 known, graded NGC AU50 that sold for $372,000. This is a new record for the date, eclipsing the $345,000 paid for the PCGS AU53+ piece sold in 2011. Arguably the most visually appealing coin in the whole auction was the 1897-O $10, PCGS/CAC MS67 that boasts a pedigree going back to the New Orleans Mint itself. Off the market since 1982, this coin was new to a whole new generation of coin collectors. The top non-gold coin was a 1794 Flowing Hair dollar, graded PCGS VF35 that brought $303,000. This same coin sold 11 years ago for $207,000, a nice return for the consignor.

Overall the auction brought more than $20.5 million, which is a very strong result in comparison to recent Long Beach sales. As we mentioned in our Quarterly III cover article, the Long Beach auction took place after our publication deadline for that issue. In response to that we have already updated the prices for $10 Liberties online with these new results. We feel that the price changes reflect not only a long due revision to the $10 Liberty series that can only be done when a collection such as this is sold, but also the positive upward movement of the overall rare coin market.

The "sheets' commentaries are getting better &amp; better...