The first of three Whitman Baltimore Expos of the year gets underway March 22nd, and the question that will be in the back of most dealers’ minds is if the positive mar 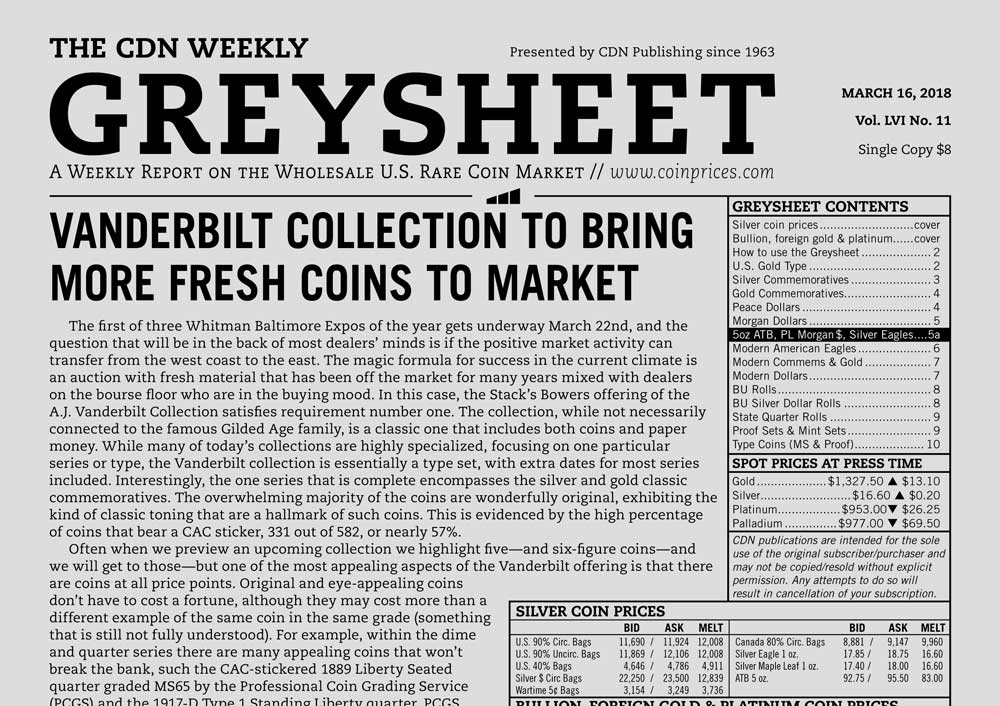 The first of three Whitman Baltimore Expos of the year gets underway March 22nd, and the question that will be in the back of most dealers’ minds is if the positive market activity can transfer from the west coast to the east. The magic formula for success in the current climate is an auction with fresh material that has been off the market for many years mixed with dealers on the bourse floor who are in the buying mood. In this case, the Stack’s Bowers offering of the A.J. Vanderbilt Collection satisfies requirement number one. The collection, while not necessarily connected to the famous Gilded Age family, is a classic one that includes both coins and paper money. While many of today’s collections are highly specialized, focusing on one particular series or type, the Vanderbilt collection is essentially a type set, with extra dates for most series included. Interestingly, the one series that is complete encompasses the silver and gold classic commemoratives. The overwhelming majority of the coins are wonderfully original, exhibiting the kind of classic toning that are a hallmark of such coins. This is evidenced by the high percentage of coins that bear a CAC sticker, 331 out of 582, or nearly 57%.

Often when we preview an upcoming collection we highlight five—and six-figure coins—and we will get to those—but one of the most appealing aspects of the Vanderbilt offering is that there are coins at all price points. Original and eye-appealing coins don’t have to cost a fortune, although they may cost more than a different example of the same coin in the same grade (something that is still not fully understood). For example, within the dime and quarter series there are many appealing coins that won’t break the bank, such the CAC-stickered 1889 Liberty Seated quarter graded MS65 by the Professional Coin Grading Service (PCGS) and the 1917-D Type 1 Standing Liberty quarter, PCGS MS64FH.

Turning to the bigger coins, we start with an important Seated coin, the 1874-CC dime certified PCGS MS63, one of only six mint state examples. The Vanderbilt coin has been off the market since 1969 when it was sold by Stack’s as part of the R.L. Miles Collection. (Coincidentally, the Miles collection was displayed in its day at a bank in Norfolk, not all that far from CDN headquarters!) Another coin off the market since the late 1960s is the 1795 Flowing Hair half dollar, graded PCGS/CAC AU55 and quite sharp for the grade. The key 1889-CC Morgan dollar in this collection is graded PCGS/CAC MS61PL, one of very few Prooflike examples of this date. Finally we will highlight a pair of gold offerings, the first a 1795 Capped Bust half eagle with the Heraldic Eagle reverse, graded PCGS/CAC MS62 that is likely to be the top lot in the sale. The second piece comes from the same year and mint as the dime mentioned above, 1874-CC, and is graded PCGS/CAC MS61—one of at most 15 specimens in mint state.