On June 14 and 15, Stack’s Bowers Galleries (SBG) conducted an auction at their headquarters in Costa Mesa, California. During a lot viewing session, a particularly impressive offering of Two Cent Pieces drew my attention, and these fared very well in the auction. 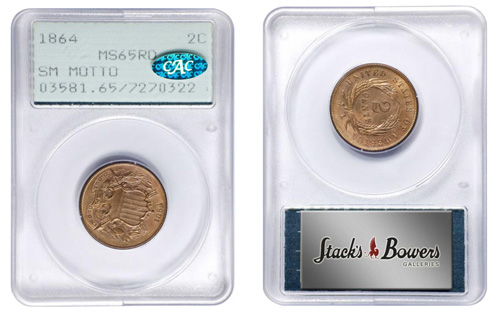 On June 14 and 15, Stack’s Bowers Galleries (SBG) conducted an auction at their headquarters in Costa Mesa, California. As hundreds of coins were offered, it is impossible to cover all or even a large portion of them here. During a lot viewing session, a particularly impressive offering of Two Cent Pieces drew my attention, and these fared very well in the auction.

Two Cent Pieces were minted from 1864 to 1873. They were specified to be 95% copper with the balance being tin and zinc, so called “French Bronze.” Two Cent Pieces are nine-tenths of an inch in diameter, greater than the diameter of five cent nickels.

The focus here is on individual Two Cent Pieces that grade above 63, business strikes and Proofs. Those seeking sub-60 grade Two Cent Pieces or more information about the series are invited to refer to a previous discussion, which is available for free at Greysheet.com ( https://tinyurl.com/BS2CentPieces ). 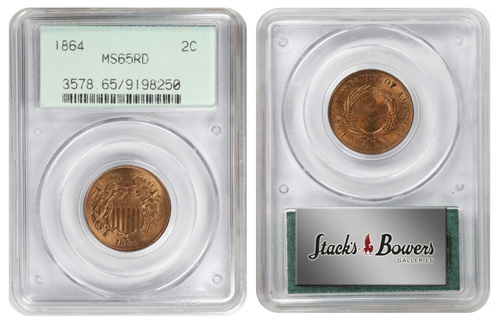 The 1864 Small Motto in this auction was PCGS certified MS65RD, and has a sticker of approval from CAC ( https://tinyurl.com/ReducingRisk ). The RD designation means that graders at PCGS determined that it exhibits Full Red color.

I believe that this coin is in a “Generation 1.2” PCGS holder. The PCGS website says that such holders were used from February 1986 to September 1989. It is the major variety of a rattler, early PCGS holders that often make noises when they are moved about.

Coins in old holders are pursued for multiple reasons. Prospective buyers know that a coin has not been ‘cracked out’ and resubmitted in raw form over and over again with the idea of receiving a higher grade. This 1864 Small Motto has been in the same holder for more than thirty years.

A small, though devoted share of coin buyers systematically collect old holders or very much prefer coins in old holders. It is also true that a coin in an old PCGS or NGC holder is less likely, on average, to have been doctored than coins in relatively new holders.

This 1864 Small Motto Two Cent Piece has never been doctored. The natural shades of red are neat. While not the most vibrant Full Red Two Cent Piece that I have ever seen, this coin is a gem, technically impressive, and attractive. If the color was a little brighter or richer, it may have brought more than $12,600. In addition, for some time, PCGS and NGC price guide values for these have been too high. The $12,600 result was a moderate price.

About a year ago, another auction firm sold a different CAC approved, PCGS certified MS65RD Small Motto Two Cent Piece for $12,925. That coin could have been superior to this one. The bidders involved could have been different as well. Each auction is characterized by a different set of bidders, with their own respective objectives. Even so, the 1864 Small Motto Two Cent Piece has always been highly demanded. I do not remember anyone ever saying that it is unimportant or “just a minor variety.”

Although the term 1864 Large Motto has become widely used, the motto is not really large. It is just of the regular size, like that which was used for the rest of the series of Two Cent Pieces. The 1864 Small Motto pieces, though legally coins, were really a variation in the design that was not adopted for long-term use.

An 1864 Regular Motto in this auction was PCGS certified as Proof-66 with a Red & Brown (RB) designation, and CAC approved. This coin has appealing deep rich original color and very gradually developed toning. The shield and the wreath naturally glow. This is definitely a coin that I would like to own.

The reasons why the presently discussed coin realized $8,400 are unclear to me. While this is a terrific coin, PR66RB is the right certification and the price realized was very strong.

Did at least two grading-wholesalers figure that this coin might qualify for a Cameo designation? I am not suggesting that it would or should. If two grading wholesalers thought so, however, then the $8,400 result would be more understandable. Merited or not, a Cameo designation from PCGS or NGC for a Proof Two Cent Piece has a substantial amount of market value.

There was another Proof 1864 Regular Motto in this run. That coin is a little below average for a PCGS certified Proof-64RB Two Cent piece, though the 64RB certification did not surprise me at all. The $2,640 result was very strong. In my view, a fair collector price would have been around $1,950.

An 1864 Regular Motto business strike was one of the best coins in the run, really exceptional. It was NGC graded MS66+ with a Full Red (RD) designation. Furthermore, it has a sticker of approval from CAC. In my mind, there is no doubt about it grading MS66 and exhibiting original mint red color. This is a really cool coin, with a vibrant reverse. The $3,840 result was a moderate to strong price, closer to moderate, certainly a reasonable deal for the buyer.

There was still another, high grade Regular Motto 1864 Two Cent Piece in this offering, and it was impressive. This one is PCGS certified as MS65RD. My tentative interpretation, formed while referring to the PCGS website, suggests that this 1864 Two Cent Piece is in a “Generation 2.1” holder, which PCGS indicates dated from October to December 1989.

Admittedly, I am not an expert in the history of the holders. Furthermore, I am not an advocate for paying substantial premiums for old holders. Collectors of holders should consult experts in this realm.

I focus on the coins themselves. As I often do, I placed my hand over the label before I examined this coin. Although the abrasions on the reverse, particularly about the numeral ‘2’ in the denomination, were a cause for concern, I still figured this coin as MS65RD. Though not blazing, the original red color is nearly full.

The price realized, $1,680, is circumstantial evidence that at least two bidders fully agreed with the MS65 Full Red certification and were enthusiastic about this coin. It is a realistic possibility, however, that its holder from the 1980s caused this coin to realize a price that was significantly higher than the price that would have been realized if it had been in a recent PCGS holder.

The price realized for the 1873, $2,880, was a mild retail price. Most of the Two Cent Pieces in this run brought rather solid retail prices or more. If a premium was paid for the holder that housed this 1873 Two Cent Piece, it was not a large premium. Greysheet Bid for it has been $2,350 since October 2020 and was as high as $2,600 during the last five years. A Greysheet Bid is usually an estimate of a top-wholesale price. 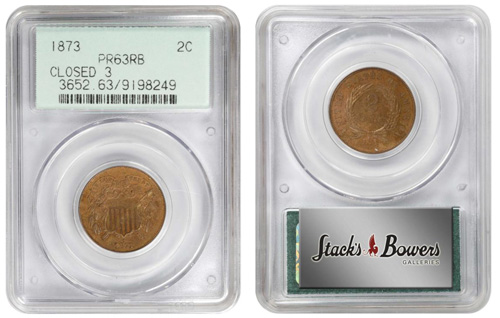 In any event, more information would be needed to analytically separate the premiums for the old holders from the overall prices realized for each of these two coins. I do not know who bought them or why. It is a fact, though, that the just mentioned 1864 brought a much stronger price than the just mentioned 1873. Did the fact that they have consecutive PCGS serial numbers on very old holders matter to the serious bidders?

One of the strongest prices for a Two Cent Piece in this run was the $3,840 result for a PCGS certified Proof-64RD 1867. These are not are not especially rare, even with Full Red (RD) designations. Possibly, at least two bidders must have figured that this 1867 was a candidate for an upgrade. I did not think of it as a candidate for an upgrade, and I hope that it does not upgrade as I would then be concerned about the collectors who acquire it in the future. Another realistic possibility is that two serious bidders figured that it was a candidate for a Cameo designation, a strategy that might explain the price realized.

It is odd that the 1867 as lot 1210 and the 1869 in this run as lot 1211 each realized $3,840, both very strong prices. Indeed, the $,3840 result was extremely strong for this CAC approved, NGC certified Proof-65RB 1869. This coin is not brilliant and does not have much personality. The toning has a distinctive magenta tint, which does not thrill me, but others may like it. 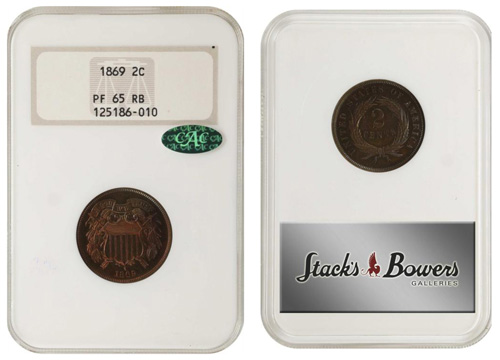 Another plausible explanation is that at least two grading wholesalers concluded that this coin may very well receive a numerical upgrade and a Cameo designation, perhaps after being modified. Personally, I find it to be illogical to pay a large premium for a coin primarily because it has a Cameo designation. Nevertheless, there are many collectors who demand Proofs that have been designated as Cameo and a small number of Proof Two Cent Pieces have been so designated so far.

Calculations of grading-wholesalers notwithstanding, the price realized, $3,840, was probably not a good value if a collector bought it. There are now many true Gem Proof 1869 Two Cent Pieces that would, if offered in 2022, sell for considerably less than $3,840.

Certified population totals for Proof-65RB 1869 Two Cent Pieces are relevant. Not including those that are certified as BN (Brown) or RD, PCGS reports seventy-nine, NGC lists fifty-five, and twenty-eight have been CAC approved as Proof-65RB. If offered in the near future, most of these would be likely to each retail for prices between $1,400 and $2,000.

The CAC approved, PCGS certified Proof-65RB 1872 is a great coin, one of my favorite Two Cent pieces in this auction. It scores very high in the category of originality. It scores highly in the technical category, too. The imperfections are minor.

The blend of natural red and brown colors is very appealing, and there is a neat touch of natural magenta on the obverse. While Two Cent Pieces do not tend to be bright, this coin features enticing, rich colors.

The $3,120 result for this 1872 Two Cent Piece was in between the Greysheet-CAC Bid value of $2,750 and the CPG-CAC medium retail price estimate of $3,440. It was one of the better values in this run, which was an especially memorable offering of Choice to Gem quality Two Cent Pieces.