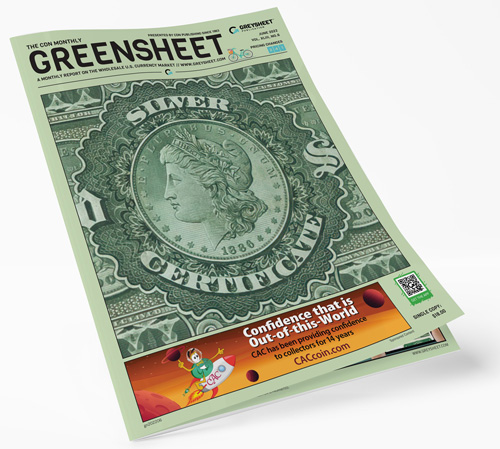 Before continuing the analysis of Large Size Silver Certificates that began last month, I wanted to first highlight the Heritage Central States Signature U.S. currency auction. The sale totaled more than $8.8 million from 1,275 total lots, nine of them surpassing the six-figure barrier. The top lot, realizing just short of half a million dollars, was the much-publicized 1882 $1,000 Gold Certificate (Fr.-1218e). The next four lots were all high denomination Federal Reserve Notes, and Lot 20943 is particularly notable. A Series 1934 $5,000 FRN from Chicago (Fr.-2221G) certified by PMG Very Choice Uncirculated, the lot realized $300,000, blowing away the record for the catalog number (previous high price was $164,500) and nearly setting a record for all Series 1934 $5,000 FRNs.

Our series analysis begins with the Series 1886 $2 Silver Certificates. These notes, featuring General Winfield Scott Hancock and a very ornate title block, were issued with five different seal and signature combinations. Across all five varieties PMG has only graded 831 pieces, with 110 of those achieving the Gem 65 or higher grade level. A mere eight notes are graded Superb Gem 67 by PMG, all of them being the Fr.-242 variety. While the Friedberg book and actual prices realized dictate that Fr.-244 is the key note of this initial series, Fr.-241 is the catalog number which has the fewest examples graded in the PMG census. While they do not appear all that often, a Gem example of Fr.-241 can be had at auction—for now—at less than $5,000. Unlike the $1 denomination, for the Series of 1891 the $2 Silver Certificates were produced with a completely different obverse. They feature the portrait of William Windom and are covered by two signature combinations, with the Tillman-Morgan signed Fr.-246 being the slightly more available of the two varieties. Interestingly, the PMG population data for the two are very similar in high grades, above AU50; the Fr.-246 has substantially more notes in the Very Good to Very Fine range.

After the Windom design type comes the Series 1896 and the second denomination of the Educational series. Covering two different signature combinations just like the $1 note, it is a stark contrast in population numbers between the two. While PMG has had 4,569 grading events for $1 Educationals, there have only been 1,851 for the $2, a decrease of 59.5%. The first signature combination, Fr.-247, has a slightly higher PMG population overall, however in grades 64 and above Fr.-248 shows greater numbers. This explains the somewhat counterintuitive pricing that despite being a higher population the Fr.-247 brings higher prices in top grade. The current record for a $2 Educational is the $35,250 paid in April of 2013 for a PMG CU67 graded Fr.-247. Looking at last calendar year, just two examples of Fr.-247 sold at the CU67 grade level: one brought just $15,000 in January and the other sold for exactly double, $30,000 in October. Just last month, in the same sale I referenced in the first paragraph, a PMG certified CU65 Fr.-248 sold for an eye-opening $17,400, obliterating the record for the grade. Such has been the U.S. currency market the past 12 months. The final $2 Large Size Silver Certificates are the “Mechanics and Agriculture” notes of Series 1899. There are ten signature combinations for this type, with the Napier-Thompson signatures of Fr.-254 being the standout key. Just 42 examples of this note have been seen by PMG with two at the CU67 grade level. There has not been an Uncirculated example of this catalog number to cross the auction block since January 2019, and a 67 has not been seen since 2016. The most plentiful catalog numbers within this series are Fr.-256 and Fr.-258, but with PMG having graded more than 1,100 examples of Fr.-258, only three notes have achieved the CU67 grade level. For the entire type there are only 32 CU67’s. When they do come available they have sold for less than $5,000, making them very opportunistic buys relative to the population. The Fr.-257 is an underrated rarity, with zero notes at PMG thus far getting the CU67 grade level, and just one note each in CU64, 65, and 66. The current record holder for this catalog number is the $20,700 paid way back in 2008 for a CU66. In the ensuing 14 years, there has only been two other Uncirculated Fr.-257s to cross the auction block! There is little question that the next one to do so will set a new record.

Subscribe to June 2022 edition of Greensheet for the industry's most respected pricing and to read more articles just like this.