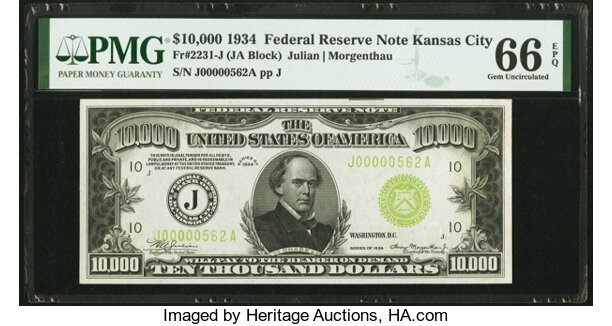 “We are honored to be entrusted with these collections from some of the most important collectors in our hobby,” said James Halperin, Co-founder of Heritage Auctions. “It’s no exaggeration to say this sale is truly a ‘once in a lifetime’ opportunity for numismatists around the world.”

Included in the first event , which begins at 6 p.m. Central on Sept. 17, is Simpson’s offering of one of the most celebrated and coveted rarities of all time: the 1894-S Barber dime . Only a handful of examples exist and Simpson’s collection, of course, has one of the finest, which is graded PR66. There is none higher. The appearance of a Barber dime is a head-turning offering, Halperin said.

Simpson’s famous rarities include a 1795 Flowing Hair dollar — the finest ever certified with a silver plug, and a 1796 JR-1 dime , certified SP67 PCGS, which stands as the sole finest certified of this variety.

Turning to the Dines Collection, the Sept. 17 sales will contain the majority of the collection’s offerings, including high-quality examples of pre-1810 gold coinage. The collection also features coveted modern standouts including the 1907 High Relief, Wire Rim Saint-Gaudens double eagle, PR69 , which would be the zenith of any assemblage.

What makes Dines' offering so exceptional is the fact that most other coins of this type are found in well-worn condition; after all, these were highly circulated in commerce. Dines' Bust dollars, however, are among the highest graded: the 1798 Draped Bust, Large Eagle dollar is graded MS64 ; the 1800, graded MS63 .

The Sept. 18 presentation of World Paper Money features four extremely rare specimens from East Africa. East Africa has become one of the most popular fields of collecting within the hobby, due in part to its interesting history, but also due to the wide variety of rare types that were produced, especially during the reign of King George V.

In 1920, four of the five British colonies in East Africa adopted the Florin from the newly formed Currency Board. A 1920 20 Florins East Africa East African Currency Board , Pick 11 PMG Choice Extremely Fine 45, is a stunning and extremely rare 20 Florins that was a middle denomination in the famed 1920 series.

Heritage also enjoys the highest online traffic and dollar volume of any auction house on earth (source: SimilarWeb and Hiscox Report). The Internet’s most popular auction-house website, HA.com, has more than 1,250,000 registered bidder-members and searchable free archives of five million past auction records with prices realized, descriptions and enlargeable photos.