MARKET REPORT: "Your Shows of Shows" by Mike Fuljenz

The 2017 World’s Fair of Money in Denver was typically well run and fun for all.  Kids participated in many fun attractions, including a wind tunnel of cash and picking 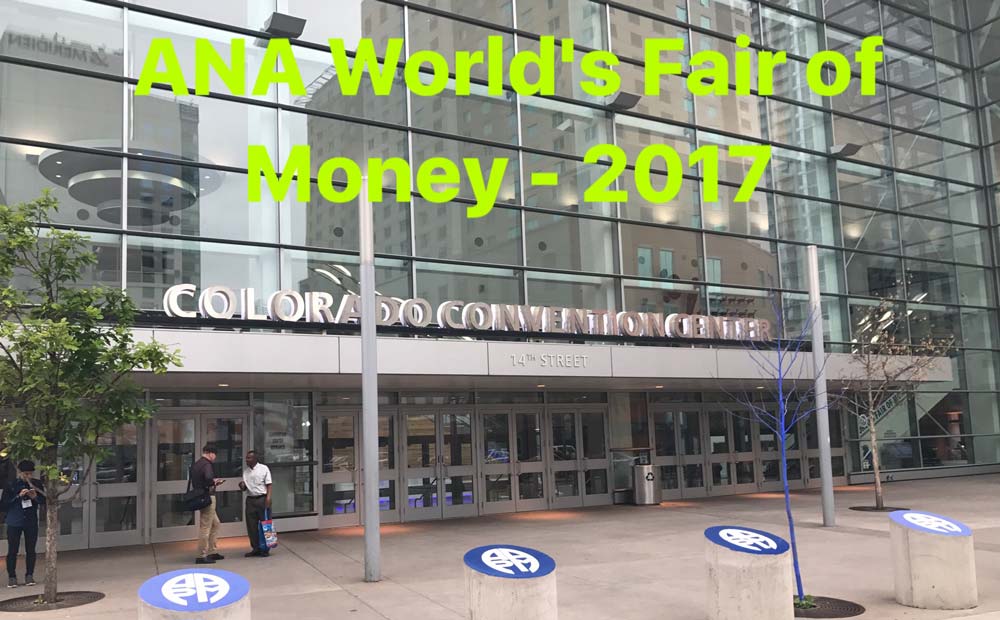 MARKET REPORT: "Your Shows of Shows" by Mike Fuljenz

The 2017 World’s Fair of Money in Denver was typically well run and fun for all.  Kids participated in many fun attractions, including a wind tunnel of cash and picking from baskets of free elongated coins.

There was mile-high excitement about the show’s highlights, which included a sprawling bourse, a multi-million-dollar auction and meetings large and small by specialized clubs.  A nice, but not exceptionally toned, Lafayette dollar in PCGS MS-66+ CAC blew away past sales records when it sold for $34,100.

One of my personal favorites was the fun-filled Bash conducted by the Numismatic Literary Guild.  From simple beginnings nearly 50 years ago, the Bash has become the social highlight of the week.  The trail mix of early Bashes has given way to an elaborate buffet featuring warm, carved beef, ham and turkey and more than a dozen side dishes.

Delicious food isn’t the only thing on the menu.  Bash-goers also are treated to a variety of satirical skits and songs, and winners of the NLG Writers’ Competition receive their handsome plaques.

I was fortunate enough to receive the Guild’s highest award, the Clemy, in 2013 and this year I had the pleasure of bestowing another major honor, the Ribbit, on David Hall, the founder of the Professional Coin Grading Service, who has been a leader in the coin industry and a great innovator and educator for many years.

The Ribbit recognizes service to the Guild and a sense of good fellowship.  It signifies that as a businessman, numismatic educator and a colleague, David Hall is a perfect “70.”

John Feigenbaum, publisher of the 2017 NLG award-winning Coin Dealer Newsletter, hosted a breakfast at the World’s Fair of Money for invited experts to converse on how guides such as his should price coins.  John is to be congratulated for putting himself out there and welcoming input and dialogue on his price guide and pricing in general.

The meeting was attended by numerous luminaries in the numismatic field, including ANA President Jeff Garrett, incoming ANA President Gary Adkins, past ANA Dealer of the Year Lee Minshull and Mark Salzberg, president of the Numismatic Guaranty Corporation.

Topics of discussion included how a price guide accounts for pricing of coins when there are many different data points from bourse floor transactions, auction results, trading system results, coin site listings, etc., over time.  How to account for outliers, PCGS vs. NGC pricing, CAC vs. non-CAC pricing and exceptional toned coins vs. untoned coins.

Also discussed was how to inform the average reader of price guides so that he can be in tune with what leading experts understand about a price guide.

All in all, I found the CDN team receptive and willing to adjust their pricing methods, when appropriate, for the betterment of all.  Many of the comments from the attendees were enlightening.  We thank John and his friendly, informative associates for their hospitality.

One of the big stories missing in the mainstream media this year is the fact that gold is up nearly 10 percent, while most other commodities are down – often by 10 percent or more.  The Wall Street Journal occasionally lists a table of leading commodities, and gold has been the superstar at the top of the list:

Here’s a list of commodities’ performance from Jan. 1 through July 21:

This means that gold is performing 17.3 percent above the widely-watched CRB index of 19 leading commodities.  The Thompson Reuters Core Commodity CRB Commodity Index has been in existence since 1957.  It measures price trends in 19 commodities, with the greatest weight given to agricultural commodities (41 percent), closely followed by energy (39 percent), then industrial metals (13 percent) and precious metals (7 percent).

While all the news has centered around “record highs” in the stock market indexes, few have mentioned that gold’s gains in 2017 have almost exactly matched the most widely-followed stock index, the Dow Jones Industrials.  Both are up a little over 9 percent so far in 2017 (while the S&P 500 is up 10.4 percent).

A more important metric is their long-term growth rates since the beginning of the new century:  Gold is up 333 percent and silver is up 210 percent, versus just 88 percent for the Dow Jones Industrials and 68 percent for the S&P 500.

In the 1970s, gold quadrupled twice.  First, it rose from $42 to $200 in 1972-74 based on Watergate and President Richard Nixon’s resignation, the Arab Oil Embargo and resulting inflation and a 50-percent stock market decline.  Then gold quadrupled again in the late 1970s based on President Jimmy Carter’s failed foreign policies, an energy crisis, gas lines, double-digit interest rates, 11-percent unemployment and inflation.

Gold has historically risen sharply when global tensions rise.  Some examples include Russia’s late December 1979 invasion of Afghanistan, sending gold up from $450 to $850 in just three weeks.  Another dramatic example came after 9/11 in 2001.

While other investments were falling, gold shot up.

UNIVERSAL COIN & BULLION EMAIL DISCLAIMER This communication is for informational purposes only. It is not intended as an offer or solicitation for the purchase or sale of any item, or as an official confirmation of any transaction, unless specifically agreed otherwise in writing. All prices, historical data or other information are not warranted as to completeness or accuracy and are subject to change without notice. Any comments or statements herein do not necessarily reflect the views or opinions of Universal Coin & Bullion (UCB). UCB shall not be liable for any errors or omissions arising as a result of this transmission. Use of this communication by other than the intended recipients is prohibited. It is important that you do not use this email address to request, authorize or affect the purchase or sale of any item, or to effect any other transactions unless expressly agreed to in writing by UCB management. The information contained in this email or attached to this email is based on sources believed to be reliable, but its accuracy may not have been verified. You are advised to independently verify all representations made herein. This email and emails sent by you to this email address are not private in that they are subject to review by the company, its officers, agents and employees. Past performance is no guarantee of future results. Nothing in this email should be considered specific or individualized investment, tax or legal advice.