Part I of a two-part analysis of classic commemorative coins, which enjoyed monumental popularity among investors in the late 1980s and were among the strongest performers of the early certified-coin bull market. 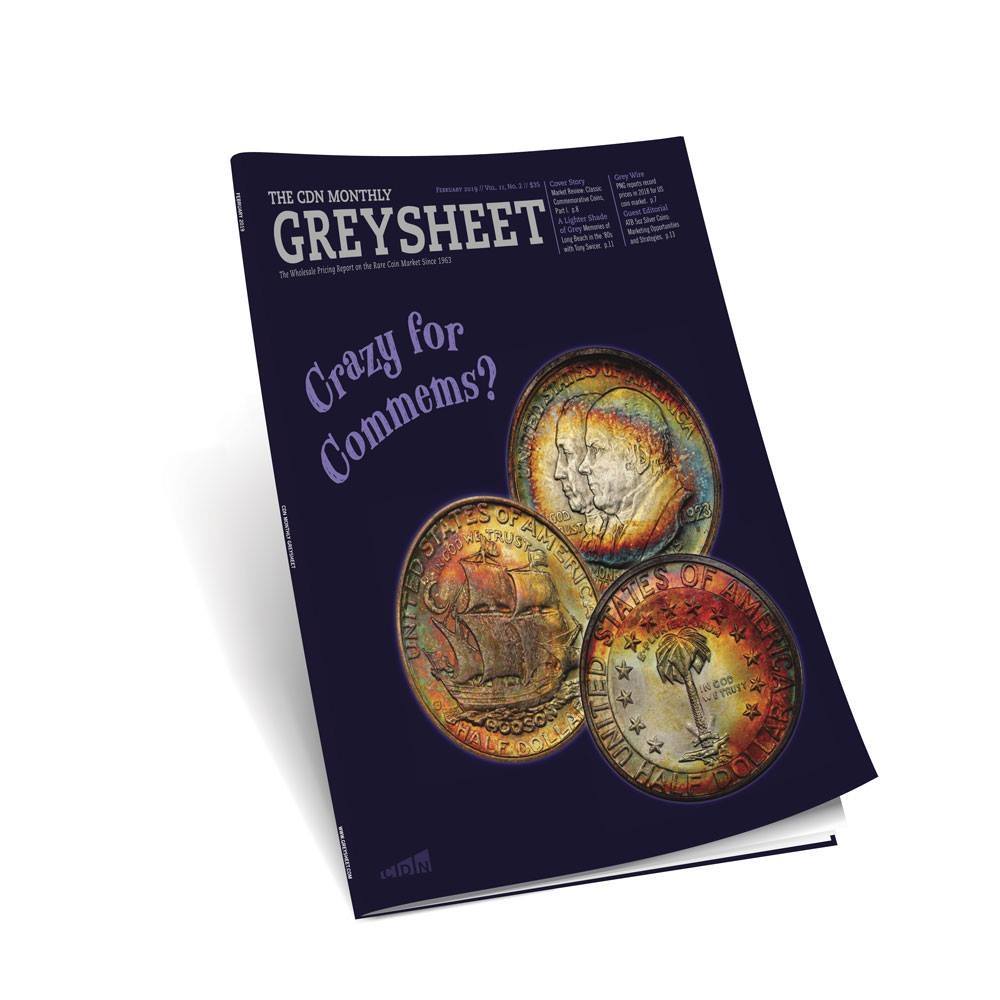 EDITOR’S NOTE: This Article Was Featured In The February 2019 Issue Of Monthly Greysheet. Part II can be found here.

The year 2019 is an apropos occasion to analyze the classic commemorative coin market. It was exactly 30 years ago that, during the late winter and early spring of 1989, prices for traditional silver and gold commemorative coins were soaring toward the stratosphere. The raging bull market of the late 1980s was reaching its crescendo, and investors paid hand over fist for slabbed MS64 and MS65 classic commemorative coins – among several late 19th- and 20th-century coin series that benefitted from heavy speculation in what was a red-hot coin market. The growth was primarily driven by a wave of Wall Street investors forking over thousands of dollars (and more) in largely sight-unseen transactions involving PCGS- and NGC-graded generic silver and gold coins.

One mustn’t forget what the state of the coin market was like in the late 1980s. Third-party certification firms PCGS and NGC were in their infancy. PCGS was established in 1986 and NGC a year later, and they emerged at a time when 1980s high rollers – many of them newly wealthy 30-something yuppies driving BMWs, eating caviar, and sipping wine – were looking for new, exciting investments with certain upward potential. Coin shows and coin auctions were still where most of the action happened outside of individual coin shops, though perhaps hinting of the technological advances to come in the industry, telephone and computer bidding had entered the numismatic arena and was increasingly utilized by many dealers and investors of the era.

It’s not hard to understand the appeal of the classic United States commemorative coin. Struck from 1892 through 1954, they represent an incredible variety of subjects across several denominations and have long been a favorite collectible among a certain niche of numismatists. Over six decades, the US Mint pumped out some 59 distinct types of commemorative coins and more than 150 issues mostly encompassing half dollars but also spanning other denominations, including a quarter-dollar, silver dollar, several gold dollars and quarter eagles, and two $50 gold pieces.
Some of these commemorative coins have broad appeal well beyond the rank-and-file commemorative coin collector. Think, for a moment, about the $50 Pan-Pac Round and Octagonal gold coins. Only 483 of the former and 645 of the latter were sold as part of a series of commemoratives including a half dollar, gold dollar, and $2.50 quarter eagle honoring the 1915 Panama-Pacific International Exposition in San Francisco – a monumental event regarded as a comeback party for the city that was virtually destroyed by a massive earthquake in 1906. On occasions when $50 Pan-Pac gold coins have hit the auction circuit, they regularly bring big numbers. At two separate 2018 Heritage Auctions events, a PCGS/CAC MS66 $50 Pan-Pac Round realized $336,000 while an NGC/CAC MS66 hammered for $192,000. In another 2018 Heritage sale, a PCGS/CAC MS64 scored $114,000, while a PCGS MS65 took $174,000 in a Stack’s Bowers auction. Octagonal $50 Pan-Pacs have also fared well recently, with a PCGS MS66 notching $199,750 and a PCGS MS65 going for $146,875 in the same January 2017 Heritage sale; in two other Heritage events from 2018, a PCGS/CAC MS64 specimen went for $120,000, and an NGC MS64 sold for $90,000.

While the Pan-Pac 50s may serve as the poster children of classic US commemoratives, many issues have relatively few enthusiastic followers outside of the commem-collector circle. What’s more, most commemorative types have many hundreds, if not thousands of pristine-condition certified survivors – much higher numbers than the current numismatic market can presently absorb, given the paucity of demand. Yet, as the certified coin market was emerging in 1987 and 1988, but a fraction of the commemoratives now residing in slabs had yet entered encapsulation. Population figures were still low in the late ‘80s largely because many commems hadn’t been submitted for certification. And even if some in the numismatic community knew large quantities of raw gems had yet to enter sonically sealed plastic, the then-low population figures – coupled with the vintage appeal and novelty of classic commemorative coinage – helped sell thousands of slabbed, high-end commemorative coins to eager investors, and at none too low of a price, either.

The problems that befell classic commems aren’t necessarily unique to that particular crop of coinage. Essentially all of the coins that rode a high price tide into 1989 went out to sea by the early ‘90s. But while some of the classic series that were darlings of the late ‘80s market, such as Morgan dollars and Saint-Gaudens 20s, have remained strong performers in the decades since, the classic commemorative coin seems almost forgotten by many today. Part of this may have to do with demographics. Sadly, many of the true numismatists who were diehard collectors (not investors) of commemoratives in the 1980s – think World War I and World War II vets still in their collecting prime back in the ‘80s – are no longer with us. The economy hasn’t helped the situation either. The Great Recession of 2007-09 affected scores of collectors where it hurt most (the pocketbook), leaving many numismatists with less disposable income to spend on rare coins, and in some cases having to sell their holdings to cover day-to-day expenses. These and other circumstances beyond numismatic control resulted in the dumping of thousands upon thousands of commemorative coins into an over-saturated market that already had too many pieces floating from the wake of the ’89 crash, when investors left the market en masse and sent coin prices plummeting into the (dark and flooded) basement.

COMMEMS TRADE FOR PENNIES ON THE ’89 DOLLAR

Noted dealer and market analyst Maurice Rosen has been tracking the commemorative marketplace for decades, using Greysheet pricing data in his tabulations and reporting them in his long-running periodical Rosen Numismatic Advisory. “To show how much prices have fallen since those [1989] highs, I did some figuring on the three commemorative markets: the 50-piece type set, the 144-piece complete set, and the 11-gold coin set,” he said, “And, on a strict bid-to-bid level, fusing bids from the high in 1989 to the latest bids, the 50-piece set is down 87%, the 144-piece set is down 84%, and the 11-gold set is down 87%.”

But Rosen said the losses were even worse than that for collectors, who were not paying bid prices for coins. “He had to pay a premium, and in bull markets for coins, certainly 1989, there’s what is called a market premium factor, where you have to pay a premium above bid – and usually a high premium, because there is an expectation in a bull market the price is going to be higher week after week, so prices are on a forward basis,” he explained. “That is, if the bid is $1,000, a dealer himself may have to pay $1,100, $1,200, $1,300, or more to get the coin. So, I’m using a 15% market premium at the bull market bids, and I’m assuming an investor would need to pay 15% above that price to buy coins from a dealer.” Rosen went on to say, “if you do that, you can’t use the nominal bid prices as a factor, you have to use a higher price. And because today’s bids don’t reflect a bull market, they reflect a neutral to negative market, you have to assume when he liquidates his coins, he’ll get a price below bid. I’ll use a modest 5%. If you do that, the 50-piece set isn’t down 87% – it’s down 94%. The 144-piece loss is not 84%, it’s now 89%. And the 11-piece set goes from 87% bid to bid to 91%.”

What about investors who bought their coins pretty carefully in 1989 and held onto them? It would seem they could’ve withstood the fallout from the ’89 crash a little better than those who purchased run-of-the-mill examples. After all, wouldn’t a coin certified and slabbed during a period of more conservative grading in the late ‘80s stand to do better today if coins that were once labeled as MS64s, 65s, and 66s now crossover a point or two higher? “I’ll answer that by saying the coins he bought would get CAC stickers. I mean, some may get 66s, some may come back not graded – they may come back a lower grade even,” Rosen said. “But, if you use CAC prices, there are still hefty losses. For the 50-piece set, 89%, the 144-piece set 87%, for the gold set 88%. So, all these numbers aside, you see there’s something like a 90% loss.”

We at Greysheet have upheld our duty to report “just the facts” in regards to commem pricing with a sea of red pricing arrows as the market has softened in recent years. Yet, this may in fact represent tremendous opportunities for dealers who have large inventories of classic commemorative coins and wish to move them out the door. “As bad as the losses are, I’ll admit that it’s an extremely attractive marketing tool to be used in the future by dealers and promoters when the market is strong again, when the market picks up for whatever reason – hopefully economic justification, with rising inflationary expectations, a bullish developing gold and silver market,” Rosen noted. “Then there will be investment interest coming back into the coin market, and commems will certainly be high on the list of items to be promoted. So, dealers can point to many commemorative issues available for 10 to 20 cents on the dollar compared to 1989 and claim they could go back to those highs or even more.”

Rosen said he has many clients who have expressed interest in buying commems. “Depending on what their needs, buying nice eyeballed MS64s is a good way to go because you’re getting very pretty coins that are near-Gem pieces, maybe some will be upgraded in the future, and you’re getting good values. Your risk is pretty modest at these levels.” However, this does not mean that Rosen or any other major market players foresee commems returning to their virtually esoteric 1989 highs. “I don’t want to make a big issue about people thinking that those 1989 highs are going to be revisited, and perhaps they may never be revisited in our lifetime, save a serious bout of runaway inflation,” he explained. “You can go to any number of decent-sized coin shows, see dozens of examples of any specific issue, gain some knowledge about the coins you wish to buy, and make your selection.”

All things considered, Rosen believes the commemorative coin market can be analogized with the conditions surrounding the historic 1929 stock market crash. “From the peak in September of 1929 to the actual trough in June or July of 1932, the Dow Jones Average lost 89%. So, during that horrible period, stocks on average lost 89% – and commemorative coins also lost 89%,” he said. “I mean, are these coins going to lose 99%? So, they’re about as far down as they can be.” In other words, the market seems generally favorable for collectors who wish to be selective about their commem purchases. “They’ve got the luxury to be familiar with the coins, to pick out a nice piece, and negotiate a nice price without paying any market premium factor at all. One of the most important lessons here is to study the experience of 1989, and how that affected the investment coin market. So, when we do develop another bull market, people will not let their imagination and emotions get so overblown that they lose all rational thought and have the presence of mind to sell some or all of their investment coins and not hold them while the market is going down.”