Our experts have carefully selected 827 rare and prestigious coins and medals we would like to introduce you in exclusive preview with some of the auction highlights.

Our experts have carefully selected 827 rare and prestigious coins and medals we would like to introduce you in exclusive preview with some of the auction highlights.

MDC Monnaies de Collections Monaco presents its next major numismatic auction by expert Nicolas Gimbert, an auction provided by the ministry of Maître Lefèvre, Monaco. Auction live with the clerks of Biddr Switzerland and Auex Germany and on all reference numismatic platforms. Our experts have carefully selected 827 rare and prestigious coins and medals we would like to introduce you in exclusive preview with some of the auction highlights:

Of the utmost rarity, with an exceptional pedigree and remarkable quality. Extremely fine - Fleur de coin.

Top Pop: it is the only one graded!

PCGS SP66+. Fleur de coin. An exceptional coin, the rarest type of 5 pounds! Work by Joshua Payne. Special strike of 7 minted only, by the Melbourne mint in 1921 on the original die. This is the finest known specimen.

South Australia was officially established as a British colony on the 28 th December 1836 (known and commemorated as Proclamation Day). It became an autonomous colony in 1856 with the ratification of a new constitution by the British parliament, with secret ballot and a two-chamber parliament. In 1857, there are 109 917 inhabitants. The city of Adelaide owes its name to the queen Consort, wife of king William IV. It was founded in 1836 to welcome free British people.

In 1851, the discovery of gold sparked a gold rush and about 8 000 men left Adelaide hoping to make fortune. The gold nuggets they found helped reduce the economic crisis. An analysis office is founded in 1852 manufacturing ingots and then choosing to do this mint which met the need to convert the gold nuggets, without royal approval. It was a local engraver, Joshua Payne, using local equipment, who produced these gold coins with this first legal tender in the country for the Government Assay Office in Adelaide. Coins of 10 shillings, 1 pound and 5 pounds were planned but only the one-pound coin is minted and used. On our extremely rare pattern, weight and alloy are indicated as on the one-pound coin. For the Five pounds coin, it is 1 ounce, 8 pennyweights, and 4 grains (44.102 g), as well as the 22-karat fineness. Following this minting first step, a branch of the Royal Mint is established in Sidney and will begin producing gold sovereigns. In 1921, the Melbourne Mint struck seven dies of the five pounds coin, modeled on Joshua Payne’s coin from 1852. Another die is known at the Victoria Museum in Melbourne, extremely rare and of the greatest interest. 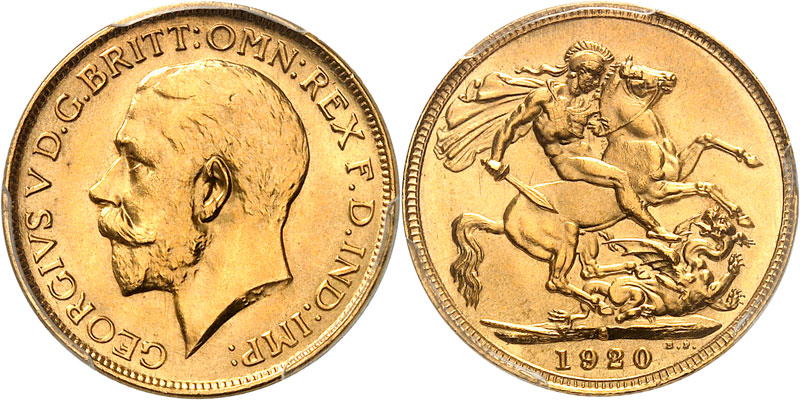 PCGS SP66. Fleur de coin. Unique. This is the only Specimen strike known. There are just three other coins known of normal striking. It is the greatest rarity of the Sovereign series.

This is the rarest mint of the Sovereign series, even rarer than the London 1819 sovereign, of which ten to twelve coins are listed. Our coin, which comes from the 2009 Quartermaster collection, is the finest known one, in a SPECIMEN strike, a hypothesis indicating that it may have been minted in 1926 in London from Australian dyes. 1920 Sidney strike is not official, gold price following the end of the first world war led to the end of sovereign production in London in 1917, in Ottawa in 1919, in Bombay in 1918 then in 1920 in South Africa and in Australia.

The figure of 360 000 coins minted in Sidney in January 1920 is in fact for the 1919 edition. This series is in fact the result of a private commission from Jacob Garrard (1846-1931) for his wedding anniversary the 15 th April 1920. With his seven children, his wife and him, we can assume that nine coins were minted, each having received a coin and only four coins are known to exist today, this one being the most beautiful.

Top Pop: this is the only graded one!

NGC MS 63. Exceptional coin, with all its original luster . About Fleur de coin.

This is the second highest grade!

The strike is probably amened 1645 on 1643. The stork on the obverse is master engraver Hans Jacob Stadler’s hallmark. 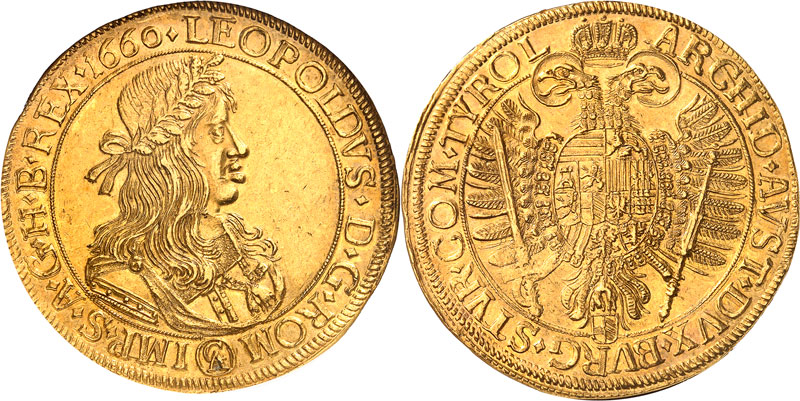 Top Pop: this is the finest graded coin!

Top Pop: this is the only graded one! 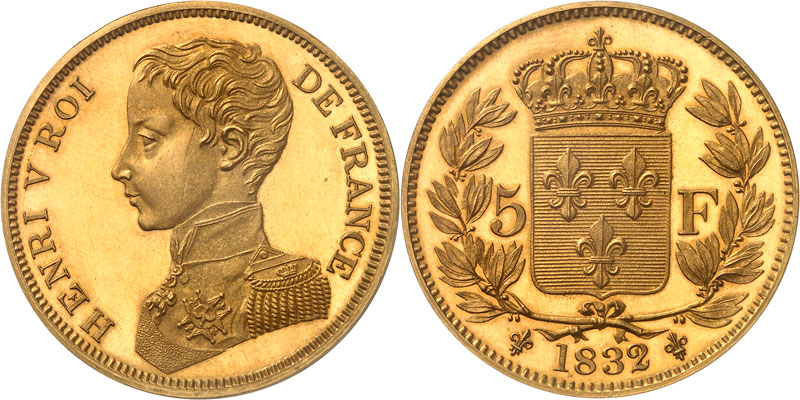 Top Pop: this is the finest graded coin !

The pattern for this type is identical to the common strike, except for the privy mark since there is a small star under the truncation and a star and an anchor on the reverse around the year. We must note a very interesting detail: the 6 of the year is inscribed on an underlying 5! This coin is a proof, struck in piefort, with a plain edge.

Obv. RÉPUBLIQUE FRANÇAISE. Winged Republic allegory standing to the right, engraving the word CONSTITUTION on a board, on his sides a beam and a rooster; in exergue: signature A.B. and Dupré.

Rv. LIBERTÉ ÉGALITÉ FRATERNITÉ. Value in a crown and (date), underneath ESSAI between two anchors.

This is the second highest grade!

Obv. RÉPUBLIQUE FRANÇAISE. Winged Republic allegory standing to the right, engraving the word CONSTITUTION on a board, on his sides a beam and a rooster; in exergue: signature A.B. and Dupré.

This remarkable portrait of William III is a creation of the renowned mint-master named in 1696: Isaac Newton. He takes his role earnestly and has numerous counterfeiters investigated and convicted, also thanks to his talents in mechanics, he supervises the engraving of a new portrait of the king. This fine-work depiction was of a never reached before level of realism by the British mint. This realistic portrait of William III is a detailed depiction of the wig locks and the bust deep reliefs.

NGC PF 66* ULTRA CAMEO. With the two obverse dies signed K and CHK. Proof essai of the utmost rarity. This is the finest known specimen!

Conrad Heinrich Küchler was born in Flanders circa 1740. He worked in Darmstadt, Mannheim, Frankfurt from around 1760 to 1775, then in France and later in England from 1793, especially for Matthew Boulton at the Soho workshop where he is the author of numerous works for many countries such as Ireland, Denmark, Germany, Russia, France. For England, he created several portraits of George III, of which these patterns for the dollar: devise is short on the obverse and long on the reverse and just a lock of hair below the shoulder truncature for the portrait. He dies in Handsworsth in 1810.

Rv. DIRIGE DEUS - GRESSUS MEOS. The queen left leading a lion with her scepter; in exergue (date) and signature W. WYON R. A.

Designed by William Wyon (1795-1851) in 1839 to celebrate queen Victoria’s reign start (in 1837), “Una and the lion” five pounds coin is known as one of the finest British coins. Victoria, accompanied by a lion, walks left, with the motto "May God lead my steps". The young queen, then aged twenty, is portrayed as Lady Una from a character in the poem The Faerie Queene by Edmund Spencer in 1590. This daring design is the first depiction of a British monarch as a fictional character: the lion embodying England is directed by queen Victoria, as Una, who guides it with her scepter.

Ex. Brand/Fore. Top Pop: The only one graded!

This pattern is prepared by an Indian engraver, possibly Jewran Shamji, at the Bombay mint. Documents are lacking on this pattern which was not implemented, but which represents an important milestone in the British India coin collection.

NGC UNC Details - Removed from jewelry. Extremely rare and of remarkable quality, with a well centered strike, an old tiny mount mark. Seems to be the only known coin. Very fine - extremely fine.