In the October 10, 1997 CDN Monthly Supplement I wrote an article entitled “Why Collect Proof Half Cents? The Numbers May Surprise You.” Since then a number of major collections containing date and/or variety runs of Proof Half Cents have been sold at auction. 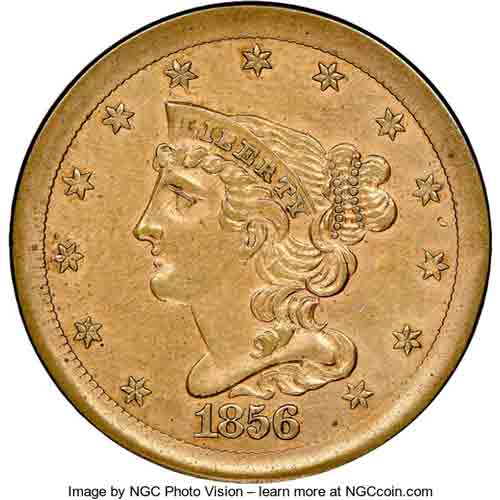 Introduction
In the October 10, 1997 CDN Monthly Supplement I wrote an article entitled “Why Collect Proof Half Cents? The Numbers May Surprise You.” Since then a number of major collections containing date and/or variety runs of Proof Half Cents have been sold at auction. Many of these coins had been off the market for several decades or more. These include the collections of John Pittman (David Akers, 1997), Greensboro V and VI (Heritage, 2014), Eugene Gardner (Heritage, 2014-15), and the fabulous Missouri Cabinet (Goldberg, 2014), which contained over 80 Proof Half Cents. Over the past 18 years the total number of Proof Half Cents submitted to PCGS and NGC has more than doubled from 445 to 1036 pieces. [Note: The reader should keep in mind that these totals are somewhat more than the actual number of different coins since it includes “crackouts” and “crossovers” that were resubmitted to the grading services. Unless the original grading tags (slab inserts) are returned to the grading services, the same coin will be counted more than once in the population data.] This article provides updated background information, population data, and sources of pricing information for Proof Half Cents.

Dates and Varieties
The U.S. Mint began coining Half Cents in 1793. While Proof or “presentation” coins in the pre-1800 era are known for various other denominations, no Proof Half Cents prior to 1811 are known.

Classic Head Proofs
According to Walter Breen, the first Proof or “presentation” Half Cents were struck in 1811 and are extremely rare (possibly unique). 1 The December 2015 NGC U.S. Coin Census lists just one “specimen” 1811 (SP64)-possibly a different example than the one cited in Breen.

Beginning in 1825, Half Cent production was resumed after a 14-year hiatus. Breen lists Proof Half Cents for all the dates in the 1820’s (i.e., 1825, 1826, 1828, and 1829) as being unique or nearly so (R8, 1-3 known) or extremely rare (R7, 4-12 known). 2 Knowledgeable experts disagree concerning the status as proofs of some of these specimens. Some examples lack one (or more) of the criteria necessary to merit being called Proofs, e.g., square rims, mirrored fields, depth of strike, etc. For example, a couple of the coins listed in Breen’s Proof census are described as “one-sided proofs” – proof obverse/uncirculated reverse. As of December 2015, the PCGS Population Report lists just one piece from this era, an 1829 graded SP63BN, and the NGC U.S. Census lists none.

The U.S. Mint struck Proof Half Cents for only six years in the 1830’s-1831 to 1836. While 2,200 circulation strikes were reportedly coined in 1831, disagreement exists as to whether the small numbers of known circulated pieces of this date were indeed struck for circulation or were proofs that escaped into circulation. Breen and other researchers, such as Roger Cohen, claim that both proofs and circulation strikes were minted.3 NGC, on the other hand, grades all of the 1831 circulated pieces as proofs, e.g., PF45, PF58, etc.

In 1836, Half Cents were only struck in Proof. Proof restrikes of 1831 and 1836 were made at the Mint during the years 1858-1860 and possibly again during the 1868-1885 period. The 1831 First Restrikes were coined from the 1831 Original obverse die and the same reverse die used to strike the 1836 Originals. The 1831 Second Restrikes were made from the 1831 Original obverse die combined with a reverse die of the type used to strike Braided Hair Half Cents. The 1836 First Restrikes are from the same dies as the 1836 Originals. These Restrikes can be distinguished from the Originals since they were struck from a slightly buckled obverse die and have squarer rims than the Originals. The 1836 Second Restrikes were struck from the 1836 Original obverse die combined with same Braided Hair reverse die described above to strike the 1831 Second Restrikes. The estimated number of survivors of all the various Proof Half Cent die combinations during the 1830’s are in the unique or nearly so (R8), extremely rare (R7), very rare (R6, 13-30 known), or rare (R5, 31-75 known) ranges. As a cautionary note, one needs to be especially careful when examining Half Cents from this period. Distinguishing between circulation and proof strikes of the 1832-1835 dates sometimes can be difficult because both types of strikes were coined from the same dies each year and many of the early strikes made for circulation have proof-like fields.

Braided Hair Proofs
Proof Half Cents were coined for each of the Braided Hair dates from 1840 until 1857, with the exception of 1853. The mint produced both proof and circulation strikes for the Braided Hair dates of: 1849 (Large Date), 1850-1851, and 1854-1857. The dates 1840-1848, 1849 (Small Date), and 1852 were struck only in proof; that is, no circulation strikes were made. Among the proof-only dates, Half Cents designated as Originals are thought to have been coined from a reverse die exhibiting Large Berries in the wreath and Restrikes are believed to have been struck from a reverse die showing Small Berries in the wreath. However, experts disagree about this conclusion. For example, while most of the Originals of the proof-only dates were struck in the year dated, Breen has hypothesized that some specimens struck with the Large Berries reverse die were coined at a later date, i.e., 1858-1860, and designates these pieces as Restrikes.4 Also, PCGS has graded a couple of the 1852 Proofs with Large Berries as Restrikes – namely, the Eliasberg and Missouri Cabinet specimens. First Restrikes are identified by reverse die doubling, which is most noticeable on the right edge of “T” in CENT and on the ribbon. Second Restrikes are identified by a reverse die exhibiting file marks above “RICA” of AMERICA. In addition to Restrikes of the proof-only dates, the Mint also produced Restrikes of two dates for which circulation strikes were made – namely 1856 and 1857. The Restrikes of 1856 and 1857 were coined using the First Restrike reverse die described above. They are believed to have also been made during the 1858-1860 period. The estimated numbers of survivors of most of the Braided Hair Proof die combinations are in the R7, R6, or R5 ranges – some exceptions being the 1856 and 1857 Restrikes which are very scarce (R4, 76-200 known) and the 1849 Large Date which is R8. Just as was the case for the Classic Head Half Cents, distinguishing between circulation and Proof strikes of the 1849 Large Date, 1850-1851, 1854-1855, and 1856-1857 Originals can be difficult because both types of strikes were coined from the same dies each year. Many of the early circulation strikes have proof-like fields.

Certified Proof Half Cents
Condition Proof Half Cents survived in fairly high grades. An examination of the data in the December 2015 PCGS Population Report and NGC U.S. Coin Census shows that over one-half of the Proof Half Cents submitted to the two services grade Choice Proof (PR63 and PR64) and over one-third grade Gem Proof (PR65 or higher).
Rarity The number of submissions (“grading events”) to PCGS and NGC of the various Half Cent dates struck in proof is shown in accompanying table. Among the proof-only issues (1836, 1840-1849 Small Date, and 1852), the scarcest date is the 1849 Small Date and the most common is the 1852. With regards to proofs of the circulation-strike dates (1831?-1835, 1849LD, 1850-1851, and 1854-1857), the rarest date is the 1851 and the most common date is the 1857.

Sources of Price Information
The CDN Quarterly I Newsletter contains price data for the various dates of Classic Head and Braided Hair Half Cents in PR63, PR64, and PR65 grades. These prices represent the wholesale prices for the most common die variety of each year. From the October, 2015 CDN Quarterly I Newsletter, we see that common-variety Proof Half Cents in the grades most frequently encountered (i.e., PR63, PR64, and PR65) are priced in the $3,300 to $25,000 range for the Classic Head dates and from $2,900 to $20,000 for the Braided Hair dates. These values are also representative of wholesale prices for “low-end” certified common-variety Proof Half Cents. “Premium quality” certified specimens, with exceptional eye appeal for the grade, or scarce die varieties often trade at significant premiums above the prices shown in the CDN.

A useful source to learn more about these coins is the Early American Coppers Club (EAC), whose primary focus is half cents and large cents (www.eacs.org). The club publishes a journal (Penny-Wise) that contains research pertaining to early copper coinage, conducts annual meetings with a bourse, exhibits, and seminars, and holds meetings at some of the larger coin shows around the country.

Summary
In summary, we see that, relative to later Proof coin issues (i.e., 1858 and later), the availability of Proof Half Cents is quite low. Additionally, from PCGS and NGC population data, we see that the coins survived in fairly choice condition. The series deserves serious consideration by collectors who are looking for coins that are old, rare, and obtainable in choice condition. As I concluded back in my 1997 CDN article, and which is still true today, “Whether you decide to add a couple of Proof Half Cents to your type set, complete a date set of the Proof-only issues, or seek to obtain all of the various Proof die varieties, you will have the satisfaction of owning some truly rare early U.S. coins.”

Jim McGuigan is a professional numismatist, specializing in early U.S. Copper, Silver, and Gold coins. Contact information is available at his website: www.eusrc.com.