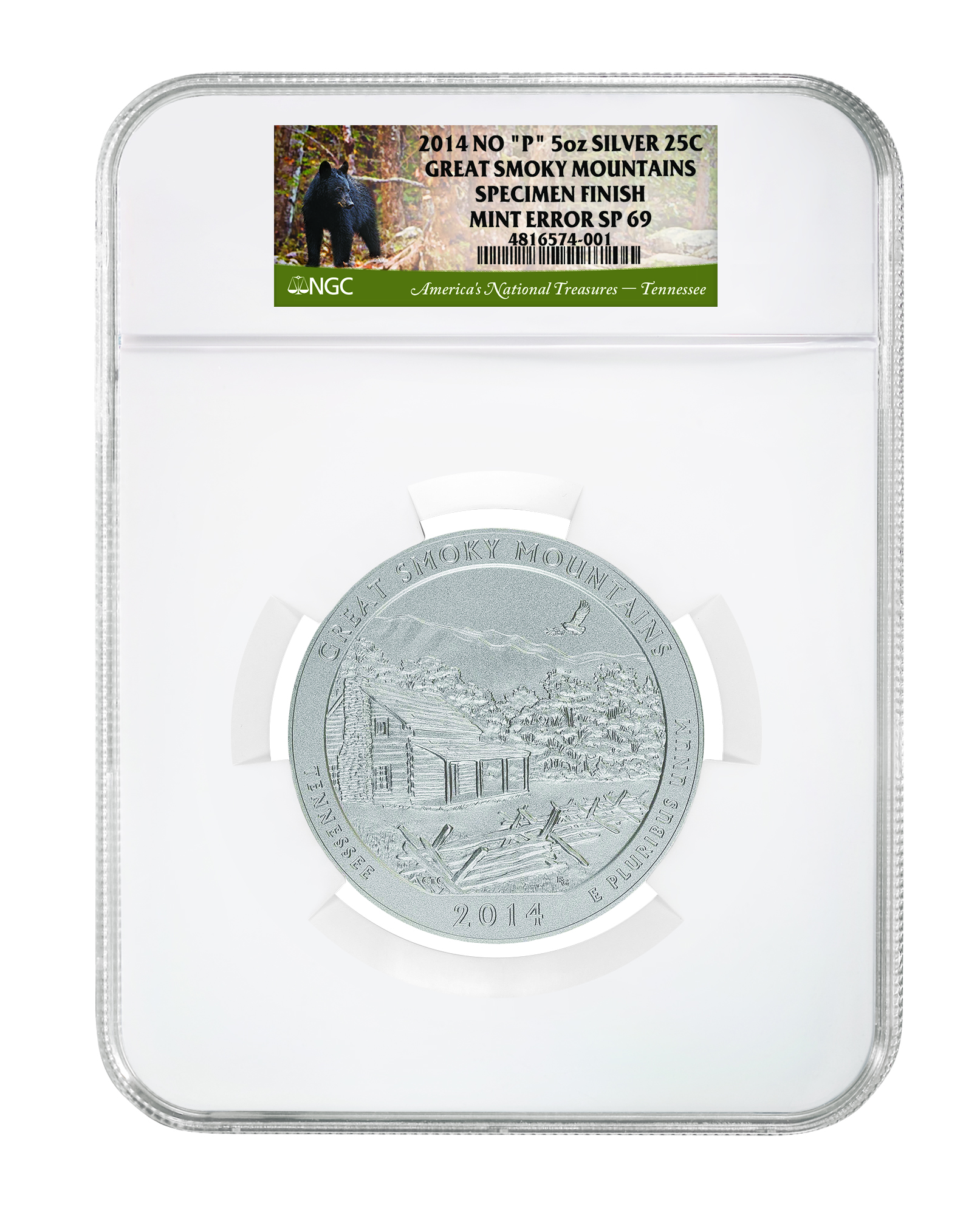 Check your 2014 Great Smoky Mountains 5-ounce silver America the Beautiful coins. Experts at Numismatic Guaranty Corporation (NGC) recently authenticated a significant error on at least five examples that are missing their “P” mintmark. The America the Beautiful quarter series, honoring national parks, forests, and federally recognized sites, has been in production since 2010, and the complementary 5-ounce silver bullion series faithfully reproduces the designs seen on the widely circulating quarters.

No-Mintmark Errors a Thing of the Past?

New error varieties involving missing mintmarks are something numismatists don’t see much of these days. Back in the late 1960s through early 1980s, coins with missing mintmarks came about on more than a few occasions. Think, for a moment about what the United States Mint produced during that era:

Mint officials said a proverbial “no more,” and by the mid 1980s adopted techniques that involved implanting mintmarks directly from the hub, theoretically putting the kibosh on the rash of no-mintmark coinage. But in 1990 the seemingly impossible happened, when along came the 1990 no-S Lincoln cent, perhaps the most popular and valuable of all zinc-era Lincoln Memorial cent varieties.

So, the allure of a no-mintmark 2014 Great Smoky Mountains ATB silver quarter goes beyond just the missing mintmark. There is also the numismatic mystique behind how such an error could occur at a time when technical precision at the United States Mint is supposed to be better than ever.

Discovering a New No-Mintmark Coin for a New Generation

Four of the no-mintmark coins were discovered by an NGC grader when reviewing a multi-coin submission by Modern Coin Mart. All of the coins had been submitted in standard US Mint packaging. A fifth coin was discovered from a separate submission. “It is exciting to find such a significant mint error several years after these coins were issued,” says David J. Camire, NGC Finalizer and mint error specialist. “This shows that you should always look closely at your coins, even special issues sold by the US Mint.”

According to Camire, the error most likely happened when examples intended for sale as mint state examples (which don’t contain a “P” mintmark) were inadvertently mixed with coins that were slated for vapor blasting, a process that occurs after the coins are struck. The vapor-blasted coins with the missing mintmark were then processed as specimen issues and sold by the U.S. Mint as such. At this time, it’s anyone’s guess as to how many of these 2014 No “P” ATB 5-ounce silver errors may have been made or if there are others out there.