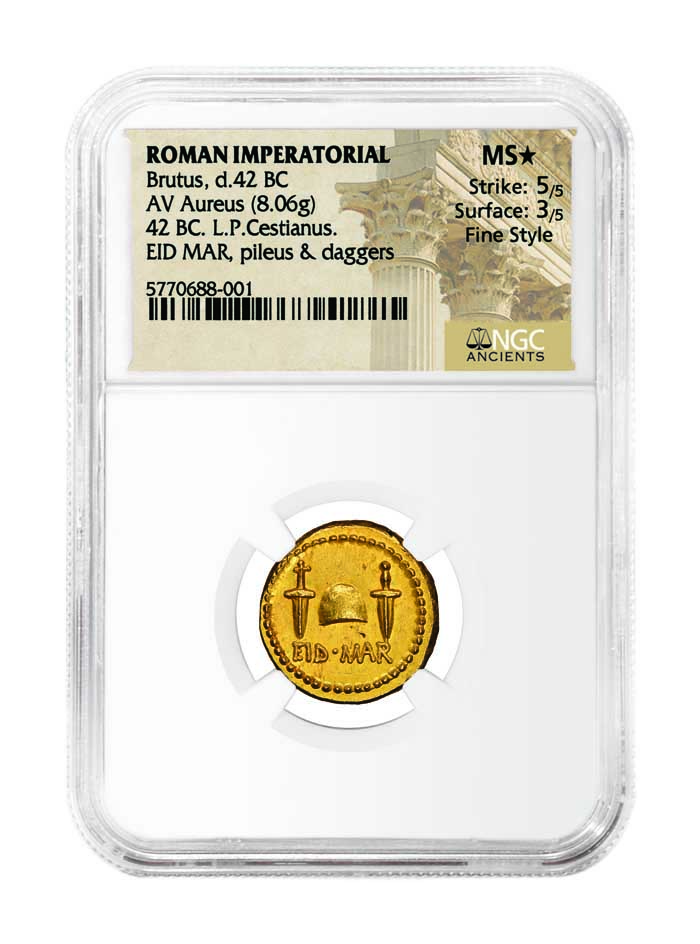 Perhaps the most important and valuable Roman coin ever to be offered at auction — an ‘EID MAR’ aureus of Brutus in Mint State condition — has been certified by NGC Ancients, the world’s premier service for third-party authentication and grading of ancient coins. 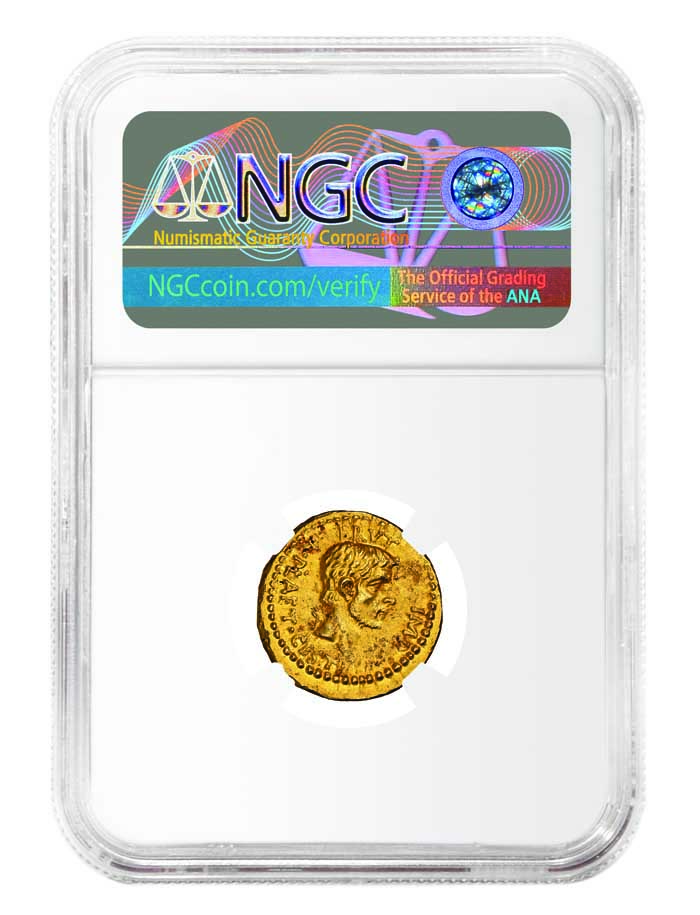 The reverse side of the EID MAR celebrating the murder of Julius Caesar.

SARASOTA, Fla. (October 8, 2020) — Perhaps the most important and valuable Roman coin ever to be offered at auction — an ‘EID MAR’ aureus of Brutus in Mint State condition — has been certified by NGC Ancients, the world’s premier service for third-party authentication and grading of ancient coins.

This remarkable example of one of the rarest ancient coins in existence is being offered by Roma Numismatics Limited , a United Kingdom-based specialist, in a sale ending October 29.

While there are about one hundred silver examples of the EID MAR, only two gold pieces were known until now. One of those is on long-term loan to the British Museum, and the other is in the Deutsche Bundesbank collection.

In addition to confirming the coin’s authenticity, NGC Ancients has assigned the grade Mint State ★, 5/5 strike, 3/5 surface, along with the “Fine Style” designation due to its high level of artistry. The trademark NGC Star (★) Designation is assigned to coins that exhibit exceptional eye appeal.

“The EID MAR aureus of Brutus is an undisputed masterpiece of ancient coinage,” commented Mark Salzberg, NGC Chairman and Grading Finalizer. “Over the last 40 years, I’ve handled most of the world’s greatest numismatic rarities, but I found this coin especially captivating. It has everything a collector could possibly want.”

Roma Numismatics Limited submitted the EID MAR to NGC Ancients for a complete evaluation in anticipation of its sale.

“We sent this coin to NGC Ancients to access the considerable expertise of its specialists,” explained Richard Beale, Managing Director of Roma Numismatics Limited. “NGC Ancients’ international reputation as an independent and impartial verification service provides the future owners of this incredible treasure the most advanced assessment of its authenticity and condition.”

The EID MAR’s iconic design celebrates the murder of Julius Caesar on the Ides of March (March 15), 44 B.C., a deed that shaped the history of the Western world. The fact that Caesar’s death (and the oft-repeated warning, “beware the Ides of March”) was later enshrined by William Shakespeare makes this event nearly as familiar today as it was more than 2,000 years ago.

Caesar’s murder brought a sudden and tragic end to a political career that had eclipsed all those of his contemporaries, many of whom feared the tyranny that might ensnare Rome if Caesar continued to rule.

Though Caesar had countless enemies, his most formidable turned out to be Brutus and Cassius, young senators who led the conspiracy against him. Though both men eventually struck coins of their own, only Brutus chose to portray himself and to create a design that celebrated the murder.

With this coin, Brutus makes his case. He does not shirk his leading role in the murder, but presents it as regicide, a patriotic act in defense of Rome.

Accompanying his portrait is an arresting image: daggers, representing him and Cassius as lead assassins, to either side of a pileus — the freedman’s cap of liberty — meant to declare the murder as an act by which Rome was liberated. Beneath is the inscription EID MAR, designating the Ides of March as the fateful day on which the conspirators left Caesar dead on the floor of the Senate House of Pompey.

Brutus issued these coins in 42 B.C. in the Eastern Mediterranean, likely in northern Greece, where he and Cassius gathered forces to wage war against Marc Antony and Octavian, fair-weather allies who kept alive the Caesarean cause. In one of the greatest battles in history — the Battle of Philippi — Brutus and Cassius were roundly defeated, leaving the Roman world to the Caesareans.

So remarkable were these coins that even more than 250 years after the fact, they captured the interest of the ancient historian Dio Cassius. His words describing Brutus and his famous EID MAR coins still resonate: “And also on the coins, which he caused to be struck, he exhibited a likeness of himself and a cap and two daggers…”

That Brutus portrayed himself is no less shocking than his brazen celebration of Caesar’s murder, for just two years earlier, when Caesar broke tradition by placing his own image on coins, Brutus was among his most vocal critics — decrying the self-promotion as the act of a tyrant. But once the tables had turned, Brutus somehow felt justified in placing his own image on coins.

Considering its fabled story, it is no surprise that the EID MAR is so admired by collectors of ancient coins. But the stakes are raised immeasurably when it comes to the three EID MARs known to have survived in gold — prizes available only to well-heeled museums and collectors willing to compete with the most advanced buyers in the world.

NGC is the world’s largest and most trusted third-party grading service for coins, tokens and medals. It provides accurate, consistent and impartial assessments of authenticity and grade. Since its foundation in 1987, NGC has certified more than 47 million collectibles. NGC Ancients, a division of NGC devoted to ancient coins, identifies and grades most coins struck in the Western world from the origins of coinage through c. A.D. 500, as well as coins of the Byzantine Empire (A.D. 491-1453). To learn more, visit NGCcoin.com/ancients.