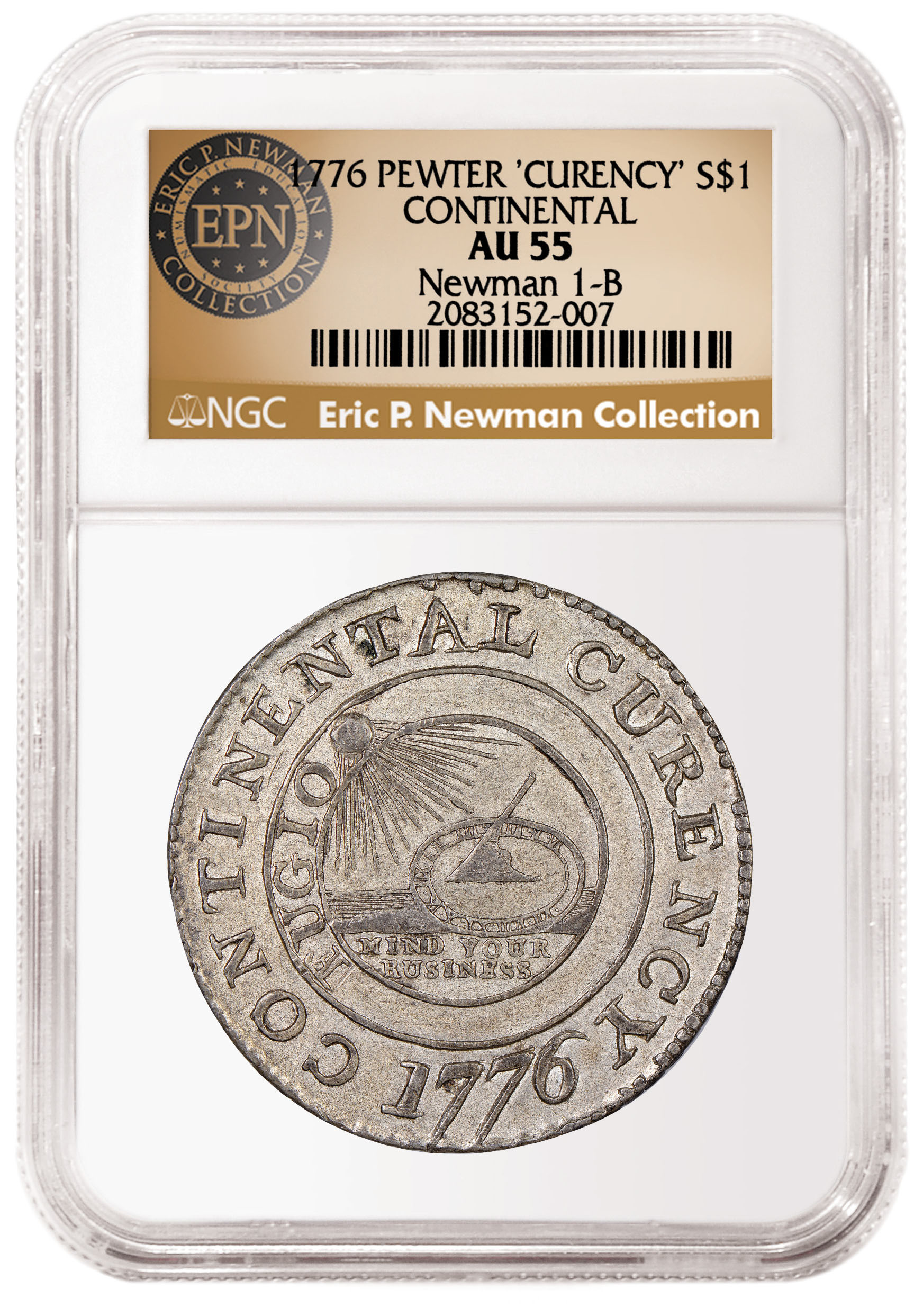 Numismatic Guaranty Corporation (NGC) has certified an additional 137 coins, medals and tokens from the Eric P. Newman Numismatic Education Society. These selections are included in Newman Part XI, the final of a series of auctions of the legendary collection, and will be sold by Heritage Auctions, Nov. 7-10, 2018.

Among Newman’s many contributions to the field of numismatics was his comprehensive study of Continental Dollars, which were struck in brass, pewter, and silver with a 1776 date. The obverse features a sundial at the center, with the words CONTINENTAL CURRENCY near the edge; the reverse shows circles with the 13 original colonies’ names linked together like a chain.

So important was Newman’s research on Continental Dollars that their varieties are named after him: Newman 1-A, Newman 1-B, Newman 1-C, Newman 2-C, Newman 3-D, Newman 4-D, Newman 5-D. The word CURRENCY on the obverse is seen with three different spellings, and other design elements changed as well.

A pewter example of the “CURENCY” spelling, attributed as Newman 1-B and graded NGC AU55, is one of the highlights of Newman Part XI. Only a half dozen specimens of this variety are known.

This is the eighth Continental Dollar from Newman’s collection to be sold. Among the examples sold in prior sales was the finest-known silver specimen, graded NGC MS 63, which sold for $1.41 million in May 2014.

Newman Part XI is the seventh installment of coins from the collection of Eric P. Newman, one of the greatest researchers of US numismatics. (The other four auctions relate to paper money.) In addition, a 1792 Washington President Pattern Gold Eagle from the collection, graded NGC XF45, was sold separately for $1.74 million in August 2018. This is the most expensive Newman coin sold through these auctions.

So far, the Newman Collection coin selections, all of which have been certified by NGC, have realized over $58 million.

Besides the 1776 Continental Dollar in pewter, Newman XI auction highlights include:

* A 1792 Washington President Pattern Silver Half Dollar, graded NGC XF Details. Only five examples are known of this particular pattern, which has design elements similar to the Washington Gold Eagle pattern sold in August 2018.

* A 1486 Austria Sigismund Guldiner, graded NGC XF40. The coin was a predecessor of the Taler, a type of popular silver coin used throughout Europe over hundreds of years.

Newman XI also contains contemporary counterfeits and other coins that NGC does not certify, as well as books, catalogs, correspondence and assorted numismatic devices used to count coins and detect counterfeits.

“These latest selections further illustrate the enormous breadth and depth of Newman’s interests and research,” said NGC Chairman Mark Salzberg. “NGC is honored to have been trusted to certify thousands of coins from this unparalleled collection, reflecting the life’s work of one of the world’s greatest numismatists.”

Prominent numismatists Stuart and Maureen Levine, who serve as advisers to the nonprofit Eric P. Newman Numismatic Education Society (EPNNES), said, “NGC was the clear choice to certify these selections due to the incredible success of the NGC-certified coins in the prior sales. NGC continues to demonstrate its comprehensive numismatic expertise.”

The NGC-certified Newman XI coins will soon be added to NGC’s Newman image gallery, which includes every certified coin that has been sold from the scholar’s collection. To view the gallery, visit NGCcoin.com/Newman

EPNNES Foundation Statement EPNNES Foundation Statement Items being sold are from the extensive collection of Eric P. Newman Numismatic Education Society (a Missouri not-for-profit corporation) and have been assembled over a period of 90 years. Proceeds of the sale of all items will be used exclusively for supplementing the Society’s scholarly numismatic research efforts and for the benefit of other not-for-profit institutions selected by Eric P. Newman Numismatic Education Society for public purposes.