Numismatic Guaranty Corporation® (NGC®) has once again demonstrated its position as the leader in modern coin certification: The third-party grading service has already certified more than half of April’s emergency production of 240,000 American Silver Eagles at the Philadelphia Mint. 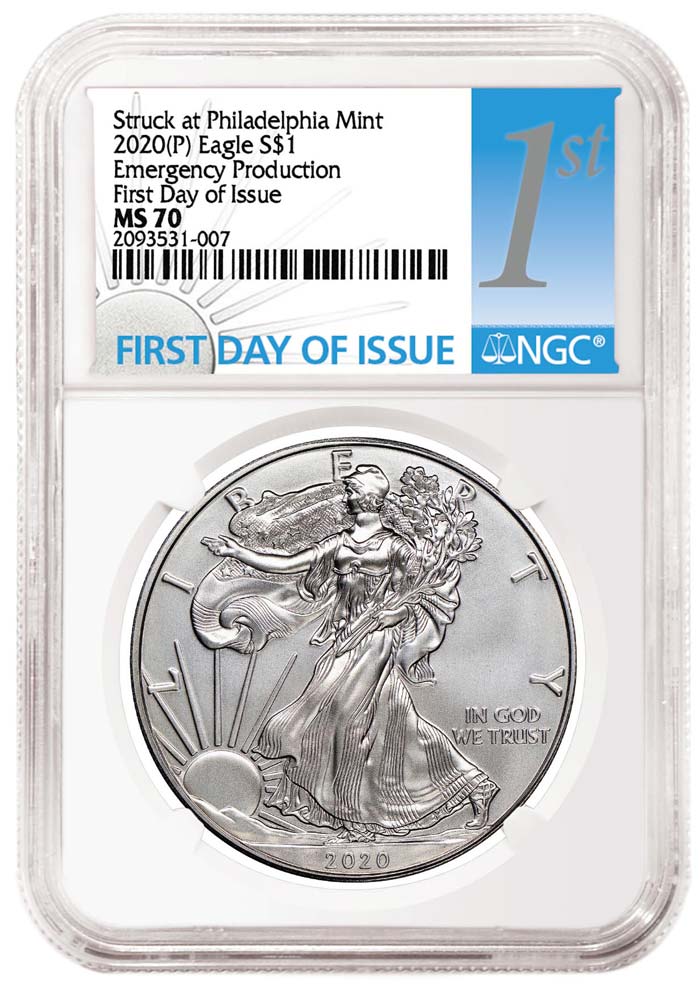 SARASOTA, Fla. (June 10, 2020) — Numismatic Guaranty Corporation® (NGC®) has once again demonstrated its position as the leader in modern coin certification: The third-party grading service has already certified more than half of April’s emergency production of 240,000 American Silver Eagles at the Philadelphia Mint.

The Philadelphia Mint struck 240,000 American Silver Eagle bullion coins between April 8 and April 20, 2020, according to official US Mint documentation. Bullion Silver Eagles, which have no mintmark, are normally struck at the West Point Mint and, in some years, the San Francisco Mint. Production of Silver Eagles was temporarily supplemented by the Philadelphia Mint due to the coronavirus emergency and strong demand for the coins.

The US Mint makes bullion Silver Eagles available through a network of distributors called "Authorized Purchasers." The coins are packaged in green "monster boxes" that each hold 500 coins. The Silver Eagles struck at the Philadelphia Mint have tracking numbers 400,000 through 400,479 on their sealed US Mint monster boxes.

The majority of these coins have now been submitted to NGC, which has long been the leader in third-party certification of Silver Eagles and other coins. NGC recently became the first third-party grading service to certify more than 10 million Silver Eagles.

“We are honored that the marketplace has once again recognized NGC as the industry leader,” said Mark Salzberg, NGC Chairman and Grading Finalizer. “Collectors place their trust in NGC because of our superior expertise, integrity and holders, among many other factors.”

Coins attributed as part of the Philadelphia Mint Emergency Production are listed separately in the 2020 Eagle section of the NGC Census. The NGC Census is a free online population report of coins certified by NGC, located at NGCcoin.com/Census. (Note: The NGC Census does not count coins that do not receive a numeric grade or an NGC Details grade, or coins that have not yet shipped from NGC.)

For more information about NGC and its third-party certification services, visit NGCcoin.com.

Easy grade. Hardly EVER see any that are not graded MS69 or MS70. Kinda just a premium scam anyway. But NGC definitely has the better looking labels. NGC definitely has the better slab. So, I bought one. But don't kid yourself. You are buying the slab, not the coin. And NGC knows it! They are like Clorox bleach, they do such a great job marketing, that they have created a following. Folks everywhere think that bleach is the kill all, do all product. And it is not. They just did a great job marketing 70 years ago. Don't get me wrong, the overwhelming majority of my slabs are NGC. As far as slabs go, I even like ANACS slabs better than PCGS. UNLESS, they are the older, more rare slab types from the 80's and early 90's. It is ALL about presentation when it comes to a bullion eagle coin.