Numismatic Guaranty Corporation® (NGC®) has certified hundreds of additional selections from the incomparable collection of Donald G. Partrick. Incredibly, this stunning group of coins includes two Brasher Doubloons, fabled rarities that rank among the most prized coins in all of numismatics. 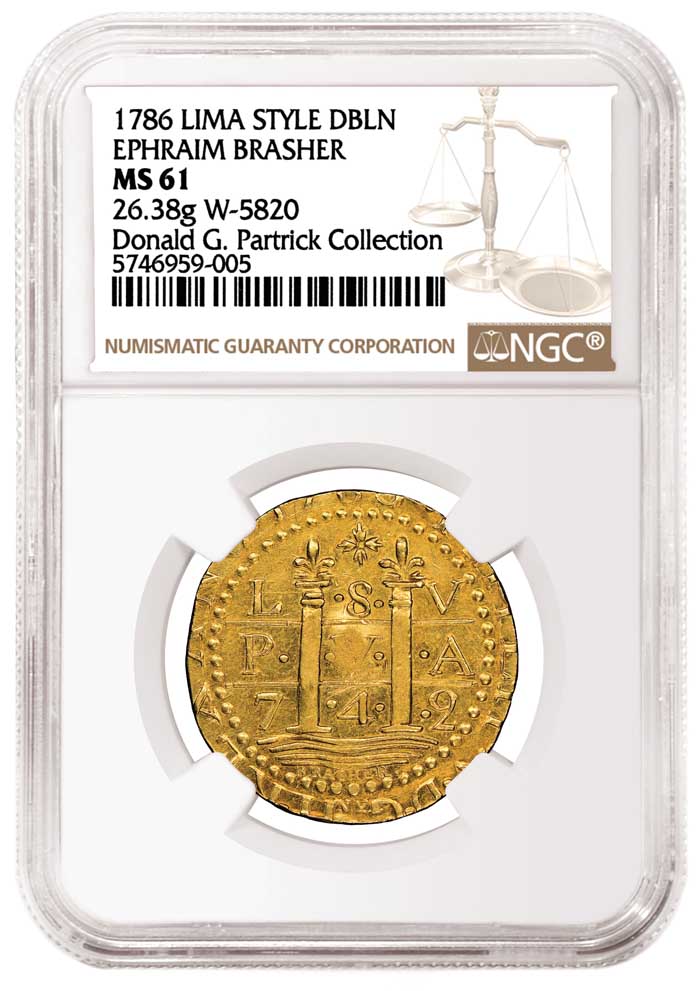 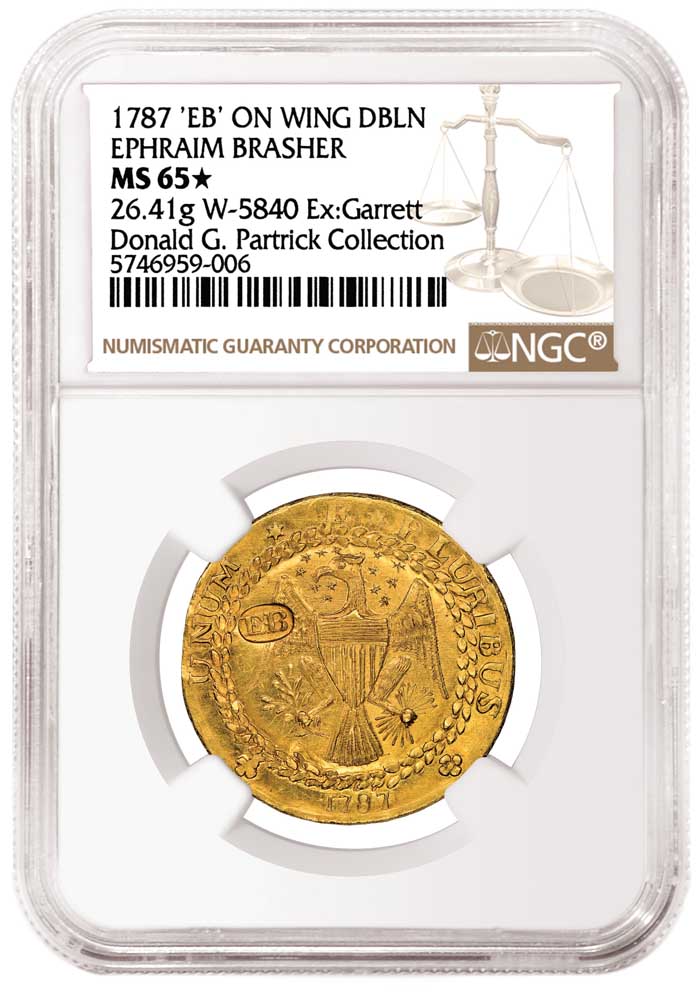 The centerpiece of the Partrick Collection graded NGC MS65★ is the highest graded Brasher doubloon by an astounding 2 points.

SARASOTA, Fla. (August 11, 2020) — Numismatic Guaranty Corporation® (NGC®) has certified hundreds of additional selections from the incomparable collection of Donald G. Partrick. Incredibly, this stunning group of coins includes two Brasher Doubloons, fabled rarities that rank among the most prized coins in all of numismatics.

The centerpiece of the Partrick Collection is undoubtedly the finest-known New York-Style Brasher Doubloon: a 1787 ‘EB’ on Wing specimen graded NGC MS 65★. This extraordinary rarity is not only the highest-graded Brasher Doubloon by a full two points, but it has also earned NGC’s trademarked Star Designation for exceptional eye appeal.

The Brasher Doubloons were the first gold coins struck in the newly independent United States. They were made by Ephraim Brasher, a New York City gold and silversmith who counted his neighbor George Washington among his customers.

Brasher struck two types of doubloons: a 1786 Lima-Style Doubloon and a 1787 New York-Style Doubloon. Both are extremely rare, and examples are worth millions. Amazingly, Partrick owned the finest example of each.

The better-known 1787 Brasher Doubloon shows a heraldic eagle on one side, reminiscent of the Great Seal of the United States. In one claw is an olive branch, which symbolizes a desire for peace, and in the other claw are arrows, which symbolize a readiness for war. On the eagle’s right wing is Brasher’s famous EB hallmark.

The coin’s other side depicts a sun rising over a mountain, reflecting a theme from the New York coat of arms. The scene is ringed by the words COLUMBIA (representing the United States), NOVA EBORACA (representing New York) and EXCELSIOR (the New York State motto, meaning “ever upwards”). The name BRASHER also appears on this side.

Only seven New York-Style Brasher Doubloons are known today, and they seldom come to market. In 2014, Heritage Auctions sold a 1787 ‘EB’ on Wing Brasher Doubloon graded NGC MS 63 for $4,582,500 at auction.

“The Brasher Doubloon is beloved as a triumphant symbol of our new nation,” said Mark Salzberg, NGC Chairman and Grading Finalizer. “This NGC MS 65★ example is simply breathtaking, and its upcoming sale by Heritage Auctions is without a doubt the most exciting numismatic event in years.”

The 1786 Lima-Style Brasher Doubloon in the Partrick Collection graded NGC MS 61 and is the finer of just two examples known. Struck before the New York-Style Doubloons, they imitated the style of a gold coin used in the Spanish Empire and are also highly prized by numismatists.

Donald G. Partrick, with the assistance of trusted advisor Jon Hanson, quietly assembled the greatest collection of Colonial and early US coins in history. In 2014, NGC was entrusted to certify the first part of his collection, a group of 350 rarities that were sold by Heritage Auctions the following year for nearly $26 million.

Now, NGC has certified many additional selections from the Partrick Collection that will be offered in a series of sales by Heritage Auctions. Many of these coins are either unique or the finest graded – a testament to Partrick’s uncompromising dedication to his hobby.

“NGC is honored to have been entrusted to certify and preserve the most important collection of Colonial and early US coins ever assembled,” said Salzberg. “These coins represent the absolute pinnacle of numismatics.”

The Partrick Collection, Part I included many outstanding examples of the coins that were struck in or for the American Colonies. Additional examples are featured in the latest selections, including more than a dozen examples of the St. Patrick’s Farthing, which was imported from Ireland to New Jersey in the late 17th century. One of these stands out for its metal composition: a unique gold specimen that is graded NGC AU Details.

Following the Revolutionary War, various copper coins were struck to assist commerce in the newly independent nation, some with the authorization of the various states and some without.

The state of New York was opposed to issuing its own copper coinage, but privately struck issues did circulate. These included pieces dated 1787 with a Native American theme and the word EXCELSIOR. The Partrick Collection includes a spectacular 1787 Excelsior Indian graded NGC MS 64 BN and pedigreed to the Eliasberg Collection. This is the finest example out of only about a dozen known.

Meanwhile, across the Hudson River, the state of New Jersey had authorized copper coinage. The coins, dated 1786 to 1788, show a horse’s head above a plow on the obverse. The Partrick Collection includes dozens of these New Jersey Coppers, including two examples of the extremely rare “Under Beam” variety, which shows the year underneath the beam of the plow rather than at the bottom of the obverse.

The collection also boasts more than 500 Connecticut Coppers, including 307 varieties out of about 360 known. This represents an incredible feat given the rarity of many varieties and the complexity of the series.

The previous sale included a large selection of Massachusetts Half Cents and Cents as well as Vermont Coppers dating from this same time period.

By 1792, when it was clear the new nation needed a national coinage, the US Mint was founded. Before a national coinage was rolled out, privately struck patterns showing the bust of President George Washington were produced for various denominations. (A pattern is a proposed design or composition for a coin.)

The Partrick Collection features several of these rare Washington patterns, including a 1792 Small Eagle Ornamented Edge G. Washington President Half Dollar Pattern graded NGC MS 63. Distinguished by its exceptionally high grade, it is a fascinating artifact from the nation’s earliest years.

Washington, who served as the first president from 1789 to 1797, is believed to have been unreceptive to the idea of having his image on the nation’s coinage. Instead, the legislation that authorized the US Mint called for the coinage to show an image emblematic of Liberty, and a female figure personifying the concept was used on almost all US coins for over a century.

When Washington died in December 1799, various funeral medals were struck to celebrate his life and achievements. The Partrick Collection has several of them, including a very rare (1800) GW-71A Gold Washington Funeral Medal with a “Skull and Crossbones” design graded NGC MS 63.

In addition to Colonial and Post-Colonial coinage, Partrick also built a formidable collection of early half cents from the US Mint. These include a 1793 Half Cent graded NGC MS 64+ BN that is among the finest that NGC has certified from the smallest US denomination’s inaugural year.

Incredibly, the Partrick Collection includes three examples of the 1796 No Pole Half Cent. One of these is the finest graded at NGC MS 63+ BN, a coin that was formerly part of the Whitney Collection.

The half cent struggled to find an audience and was put on hiatus after 1811. The Partrick Collection includes two exceedingly rare Specimen strikes of the 1811 Wide Date Half Cent. Though US Proof coinage hadn’t officially begun, these coins were obviously prepared in a special way that distinguishes them from the circulation strikes. Both coins are graded NGC SP 64 BN, and one of them is pedigreed to the Norweb Collection. While the Norweb example has been known for years, the revelation of a second example in the Partrick Collection is an exciting development.

A Later US Mint Rarity

Finally, the collection also includes an example of the most famous mint error of all time: a 1943 Bronze Cent. All 1943 Cents were supposed to be struck in zinc-coated steel to save copper for the war effort, but a small number were accidentally struck with the bronze planchets and found their way into circulation, sparking widespread interest in numismatics as the public searched for the valuable errors. The Partrick example is graded NGC AU 55 BN.

Competition is certain to be fierce when the additional Partrick Collection selections are sold by Heritage Auctions in the coming months. Watch for many new world record prices to be set.

“Donald Partrick carefully curated the greatest collection of early American coins of all time,” said Jim Halperin, Co-Chairman of Heritage Auctions. “With the coins certified and preserved by NGC, we anticipate extremely strong interest among collectors.”

To enable everyone to enjoy the phenomenal Donald G. Partrick Collection, NGC will soon add high-resolution images of the additional Partrick selections to its online gallery at NGCcoin.com/partrick.