The September Monthly Greysheet's feature article is part one of a study on Nova Constellatio Coppers. 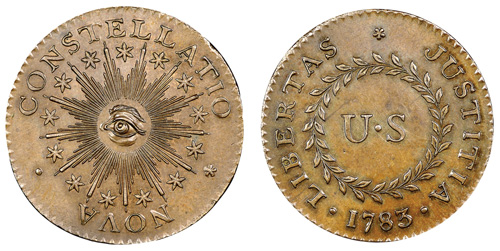 NOVA CONSTELLATIO Coppers circulated in the United States during the 1780s, proudly feature symbols of our then new nation, and are neat pieces. The major varieties are not especially rare and are not very difficult to find. Given their scarcity and historical importance, market levels for Nova Constellatio Coppers are reasonable and it is practical to complete a set in a matter of months. Before discussing the building of a set, it makes sense to address the purpose and meaning of Nova Constellatio Coppers. What are they?

In 1785, Nova Constellatio Coppers were minted in or near Birmingham, England. The history of minting and numismatic die preparation activity in the Birmingham area during the 1780s is very unclear in 2022, as few records survive. Demand, supply and circumstances relating to private copper coins changed dramatically circa 1789. There were business failures and changes in the industry of minting Coppers. I capitalize Copper to refer to circular copper items that were widely accepted as a medium of exchange, at least for a while, and were of a denomination understood by those who spent and received them in transactions.

In an ANS (New York) publication in 1995, Eric Newman provided convincing arguments and historical evidence that the company that planned, owned and imported Nova Constellatio Coppers was formed in 1784. According to Newman, Gouverneur Morris and Robert Morris each owned one fourth of this company, and Gouverneur Morris was more actively involved than Robert Morris. One of four partners was a businessman in England who probably dealt with a mint in or near Birmingham.

The fact that Gouverneur Morris and Robert Morris shared the same last name was a coincidence. As far as I know, there was not a family connection. During his career, Gouverneur Morris practiced law, managed real estate and was elected to multiple political offices.

Robert Morris arranged for assayer and coiner Benjamin Dudley to come to Philadelphia to evaluate coins then in circulation and to assist with a plan for U.S. coinage. By 1782, it was clear that Robert Morris and Gouverneur Morris were proposing a coinage system and a U.S. Mint.

Most interested historians credit Gouverneur rather than Robert for writing the Morris proposal for a U.S. monetary system, including new coin denominations. It has been argued, however, that Robert Morris should receive equal or most of the credit. The Morris proposal led to a small number of patterns being produced in Philadelphia in 1783. Benjamin Dudley engraved the dies and probably struck these patterns.

A biography of Gouverneur Morris by Jared Sparks, a famous historian, is easy to find on the internet. Sparks served as president of Harvard University from 1849 to 1853. Sparks strongly maintained that Gouverneur Morris rather than Robert Morris originated the Morris coinage plan of 1783, which bears no resemblance to the adopted plan in the Mint Act of 1792.

Gouverneur Morris was a lawyer. He wrote the preamble of the U.S. constitution and he was a vocal opponent of slavery. He served as U.S. Minister, really the ambassador, to France from 1792 to 1794 while the French Revolution was raging. Most of Gouverneur Morris’s political, professional and business activities were unrelated to coins. Although Gouverneur Morris was a shareholder, it is not clear if he was very much involved in the commercial venture responsible for Nova Constellatio Coppers.

There were a variety of Coppers in circulation in America. Until the late 1780s, any recognizable copper coin, pattern for copper coinage, pertinent token, imitation British halfpenny, and counterfeit or fantasy copper piece that weighed between 112.5 and 160 grains would probably have been accepted at par with a British halfpenny by most businesses in the U.S.

There was a tremendous shortage of small change in the United States during the 18th century. A very large percentage of silver coins that circulated in the U.S. were of the Spanish Empire. Throughout the whole 18th century, British output of copper and silver coins was far less than the demand for them.

In the monetary system of the Spanish Empire, the smallest silver coins were denominated as 1/32 of a Spanish Milled Dollar (Eight Reales silver coin). The face value of each Quarter-Real (1/32 Spanish Milled Dollar) was later to be conceptually equivalent to 3.125 U.S. cents. There were not many Quarter-Real coins in circulation in North America. The smallest denomination that was often seen was a Half-Real, later roughly equivalent to 6.25 U.S. cents.

Before the 1790s, the U.S. did not have an established monetary system. Different states defined monetary denominations and terms in different ways. Spanish monetary concepts and British monetary terms were often mixed in laws at the state level, many of which were inconsistent with market realities. It was clear, however, that coins of the Spanish Empire constituted the standard for silver coins, while the British halfpenny and its substitutes constituted the standard for copper coins in the U.S. before the 1790s.

True original British halfpennies were not seen often; they constituted a denomination, really a concept. While King George III ruled from 1760 to 1820, halfpennies were minted from 1770 to 1775 in very inadequate quantities and not again until 1799. During this time period, there were no British pennies in copper and those in silver were rarely seen in North America.

For simplicity and economic efficiency, recognized Coppers of various sorts either were accepted as the British “halfpenny” denomination, however vaguely defined, or rejected by merchants. Most were accepted and served as coins.

Until the 1820s, a majority of U.S. citizens did not think of coins in decimal terms. Even as late as the 1830s, a majority of the silver coins in circulation in the United States were those of the Spanish Empire and other Spanish societies. These were typically consistent with the old Spanish system, which was based on eighths and multiples of eight.

Regarding Coppers that circulated during the 1780s, an approximate weight range from 112.5 grains to 160 grains sounds very large, yet even lighter Coppers were accepted on occasion, too. There are seven thousand grains in a standard pound, which should not be confused with the monetary denomination, ‘pound sterling.’ In some cases, Coppers that were minted at 84 per pound, 83.33 grains each, circulated, though they may have been accepted as farthings (one-fourth of a penny) rather than as halfpennies.

There was then no practical way for merchants and consumers, many of whom were illiterate, to create additional copper denominations that would be acceptable to people all over the United States. Eventually, however, circulation of Coppers that weighed much less than true British halfpennies had a sharp negative effect on most all circulating Coppers. By 1788, the circulation of Coppers in the U.S. became much more complicated, and a crisis ensued. 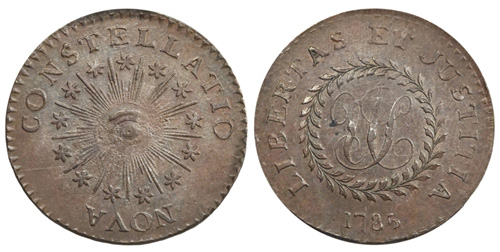 Each Connecticut Copper was specified to weigh 144 grains (9.33 grams). New Jersey Coppers were made in large quantities from 1786 to 1788 and were specified to each weigh 150 grains. Many other State issued and private Coppers, however, weighed much less than 144 grains each.

In July 1785, it was stipulated that Vermont Coppers would weigh 160 grains each (43.75 per pound). In October 1785, however, the official authorized weight for each Vermont Copper was reduced to 111 grains (63 per pound). Therefore, Vermont Coppers weighed much less than New Jersey Coppers, Connecticut Coppers, and most Nova Constellatio Coppers, yet they circulated on par with British halfpennies.

Although the State of New York never officially approved the issue of coins, many New York Copper patterns and widely accepted imitations of British halfpennies were struck in New York state, mostly at the Machin’s Mills Mint near Newburgh, though also in New York City. New York Coppers could have been struck elsewhere, too.

Most of the 1787 Nova Eborac series of New York Copper patterns, really imitations or legitimate counterfeits of British halfpennies, weighed 116.67 grains each on average (60 per pound). Earlier, Virginia halfpennies of 1773 were struck in England in batches of 60 per pound and thus likewise weighed 116.67 grains each on average.

A large percentage of the production Nova Constellatio Coppers also came in batches of 60 per pound, though the weights of Nova Constellatio Coppers did vary considerably. It is believed that they were struck in batches of 46, 50, 55, 60, and 72 per pound. Those struck at 72 per pound would have weighed less than 100 grains each on average. Were all or most of those accepted in accordance with the British halfpenny standard? I do not know.

It is true that the State of New York did attempt to punish merchants who circulated lightweight Coppers, yet such a rule was untenable. The acute shortage of low denomination coins resulted in an evolution of standards. Markets rather than governments selected the Coppers that were determined to be coins. 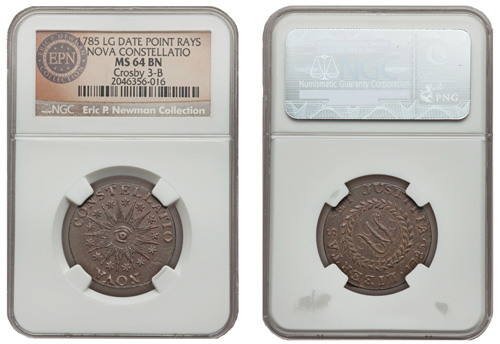 Nova Constellatio Coppers are not counterfeits, fantasies or tokens. They are privately issued coins that were intended to and actually did circulate widely in accordance with an accepted standard, probably in all states of the union during the 1780s. These are true coins with connections to major founding fathers. They feature an artistic design that reflects American concepts. Even coin collectors who never before thought much about them may enjoy owning at least one Nova Constellatio Copper.

Subscribe to September 2022 edition of Monthly Greysheet for the industry's most respected pricing and to read more articles just like this.