More than 2,500 lots from 14 single-owner collections and from clients around the world highlight Heritage Auctions’ U.S. Coins Signature Auction, April 22-25 on HA.com. 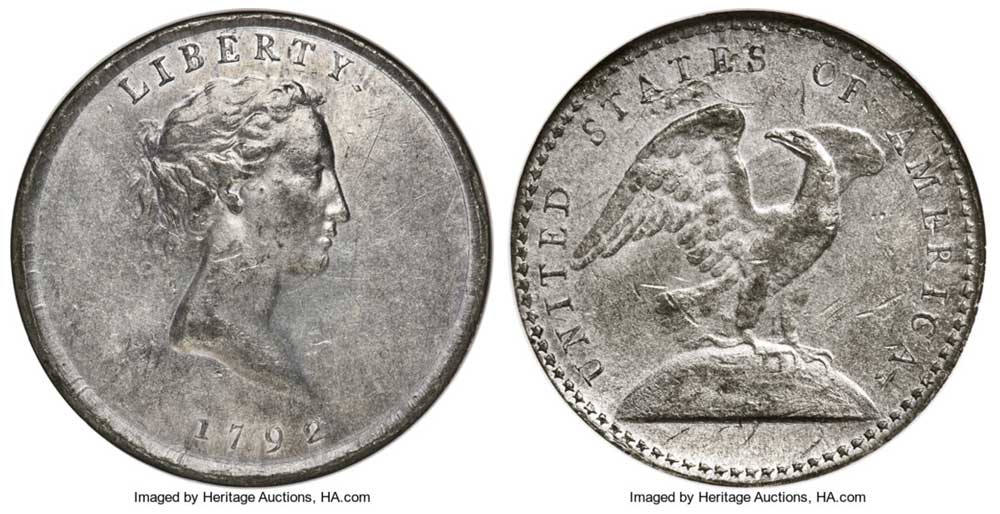 The event represents the official auctions scheduled during the Central States Numismatic Society (CSNS) annual convention, which was cancelled. Public lot viewing will be available by appointment only and the firm is also offering its virtual lot consultation to bidders, following its popularity among clients.

The auctions present an important selection of early American coins, one of which has never before offered at auction: one of the four existing 1792 Judd-13 Eagle-on-Globe quarter dollar patterns, in white metal, Pollock-15, High R.7, AU58, NGC, from the New-York Historical Society Museum & Library.

In terms of great Colonial collections, the Donald G. Partrick Collection deserves a preeminent place alongside the legendary collections of Roper, Garrett, Norweb, Boyd and Newman.

More than 200 pieces comprise the Partrick collection of U.S. half cents, including many Condition Census coins and rare varieties. All told, the half cent lots represent more than half of this Partrick Platinum auction. This superb collection-within-a-collection was assembled by Partrick with the expert assistance of advisor and friend Jon Hanson. Spoons and other silver pieces crafted by early colonial silversmiths such as Ephraim Brasher and Joseph Richardson, Jr. are also featured.

Highlights include, but are not limited to:

The Bob R. Simpson Collection, Part V includes more than 100 selections from the regular U.S. series and 130 outstanding patterns. The part-owner of the Texas Rangers baseball team and a lifelong Texas energy executive curated a collection that continues to make numismatic history. Total prices realized from Simpson’s remarkable collection already exceed $50 million and the coins available in Part V are nothing short of exceptional.

Advanced collectors are likely to focus on patterns, particularly what is considered the “first dollar struck at the Mint”: a 1794 No Stars Flowing Hair dollar in copper – Judd-18, VF25 PCGS, Unique.

Selections from The Bob R. Simpson patterns include:

For more information on how to cast a bid or view catalogs assembled for the event, visit Coins.HA.com.