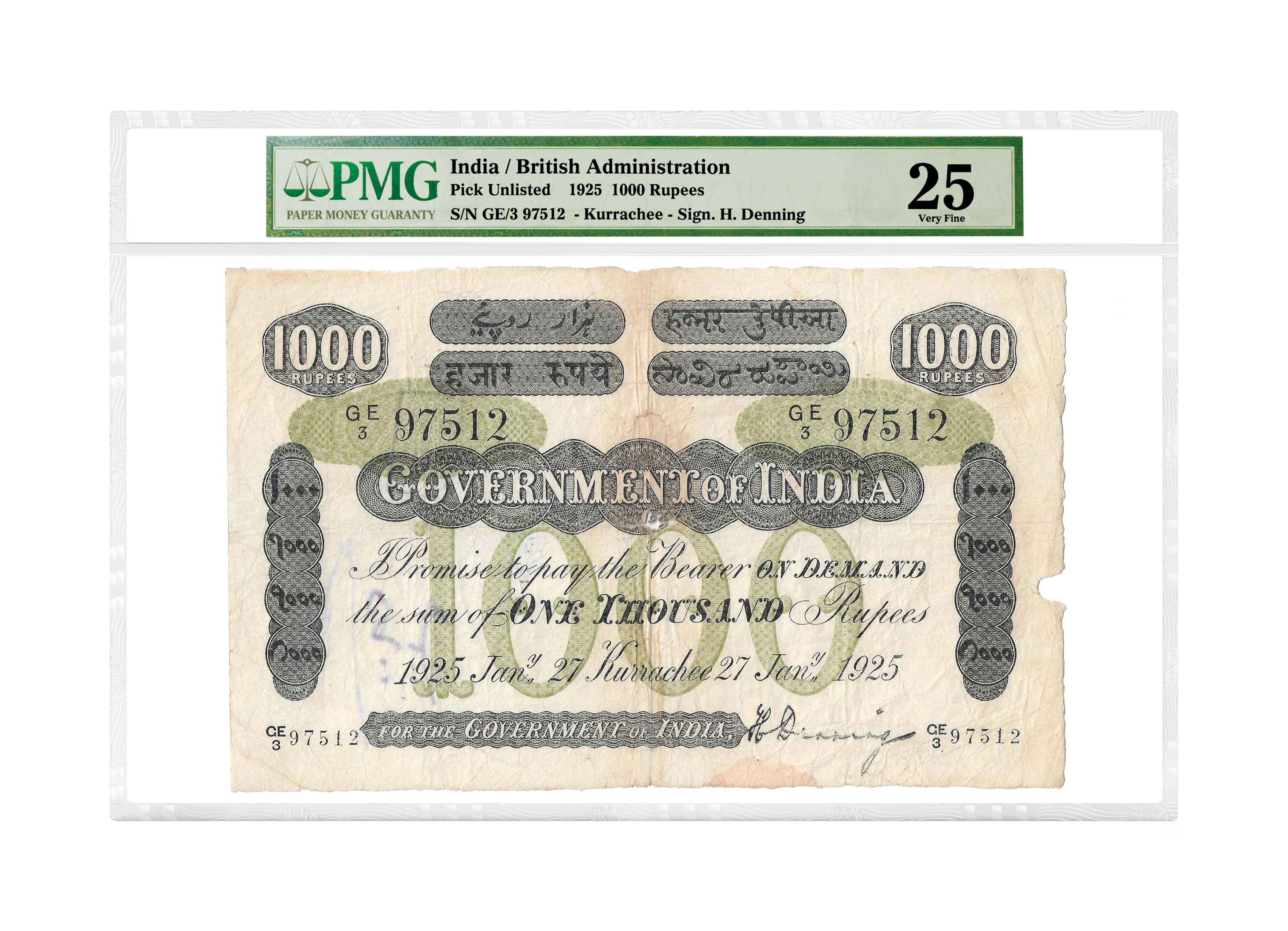 The 1925 banknote was not previously known to specialists.

Now graded PMG 25 Very Fine, the note is considered a “discovery note” because it was not previously known to specialists. It is not listed in the Standard Catalog of World Paper Money, more commonly known as the Pick book after its original author.

Spink, a venerable UK-based auction house, submitted the note to PMG during PMG’s June 2019 on-site grading event in Hong Kong. The note will be offered in Spink’s London World Banknote sale on Oct. 2.

“This note is a significant discovery that will be highly sought by advanced India collectors,” said Spink Global Head of Banknotes and Bonds Kelvin Cheung, who estimated its worth to be about $100,000. “We chose PMG to authenticate and grade it because of the company’s reputation for accuracy, consistency and integrity.”

“PMG was honored to have been entrusted to authenticate and grade this ultra-rare British India banknote,” said Steven R. Eichenbaum, CEO of PMG. “We are fortunate to have the opportunity to examine many of the paper money world’s greatest discoveries and rarities.”

The Certified Collectibles Group (CCG®), of which PMG is an independent member company, recently established an affiliate in India to better serve collectors and dealers in the country. The company, NGC India Numismatic Services Private Limited (NGC India), and PMG recently conducted the first PMG on-site grading event in India.

PMG holds on-site grading events in Hong Kong and other cities periodically. Its next one in Hong Kong is scheduled for Aug. 12 to 24, 2019, at the offices of NGC Hong Kong Ltd., its Hong Kong affiliate. Submissions must be made by Aug. 9.

Vintage and modern notes from virtually every country will be accepted for this event. As an added benefit to its submitters, PMG will not charge any additional fees for the on-site grading.

For more information, go to pmgnotes.hk/news/article/7514.

NGC, PMG, NCS, CGC, CCS, ASG, CAG and CCG are the registered trademarks or unregistered trademarks of Numismatic Guaranty Corporation of America, and/or its related companies in the United States and/or other countries. All other names and marks referenced in this release are the trade names, trademarks, or service marks of their respective owners.