The expansive, museum-quality collection formed by Andrew Shiva includes the rarest, most intriguing and most valuable National Bank Notes known to exist. 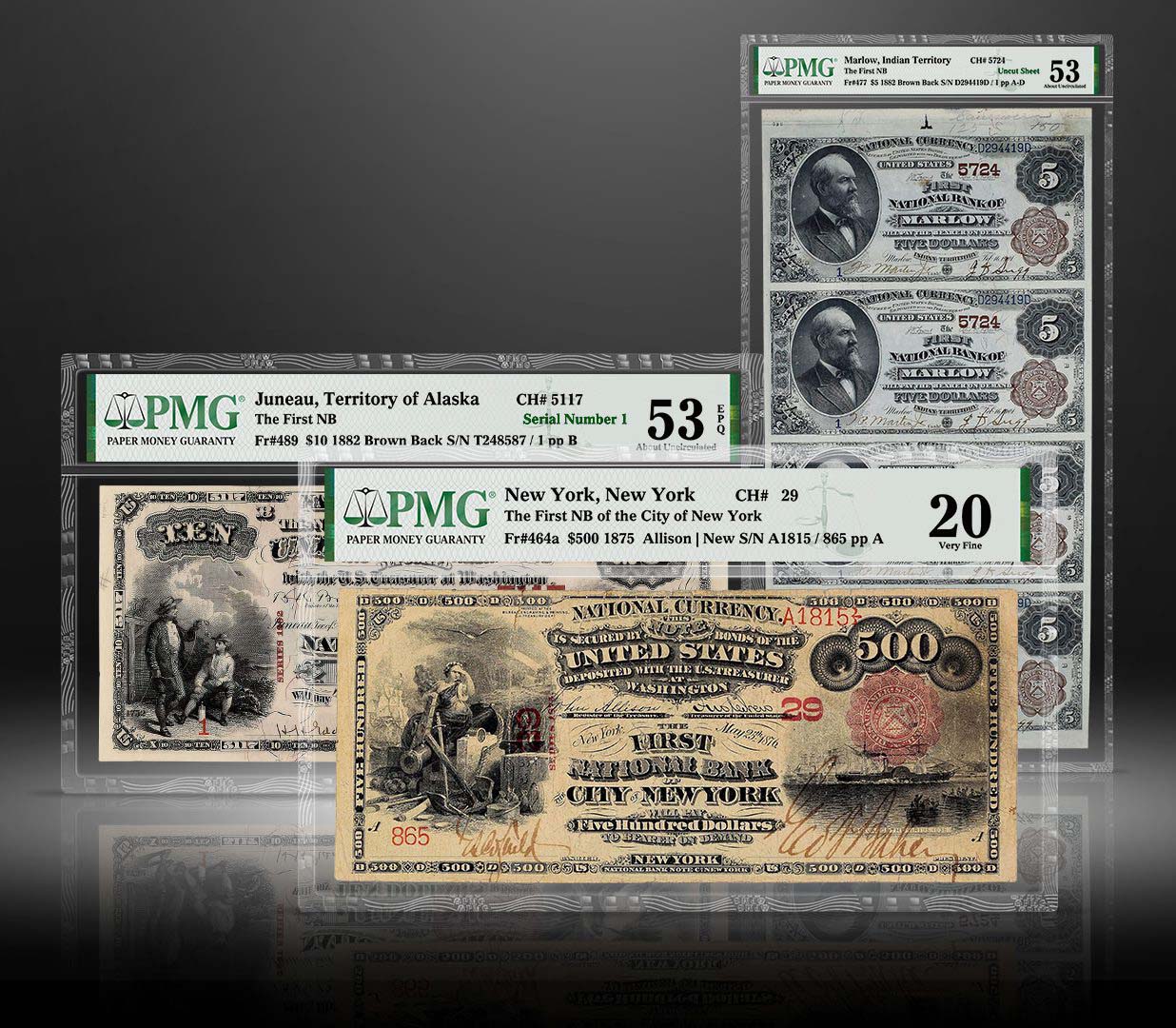 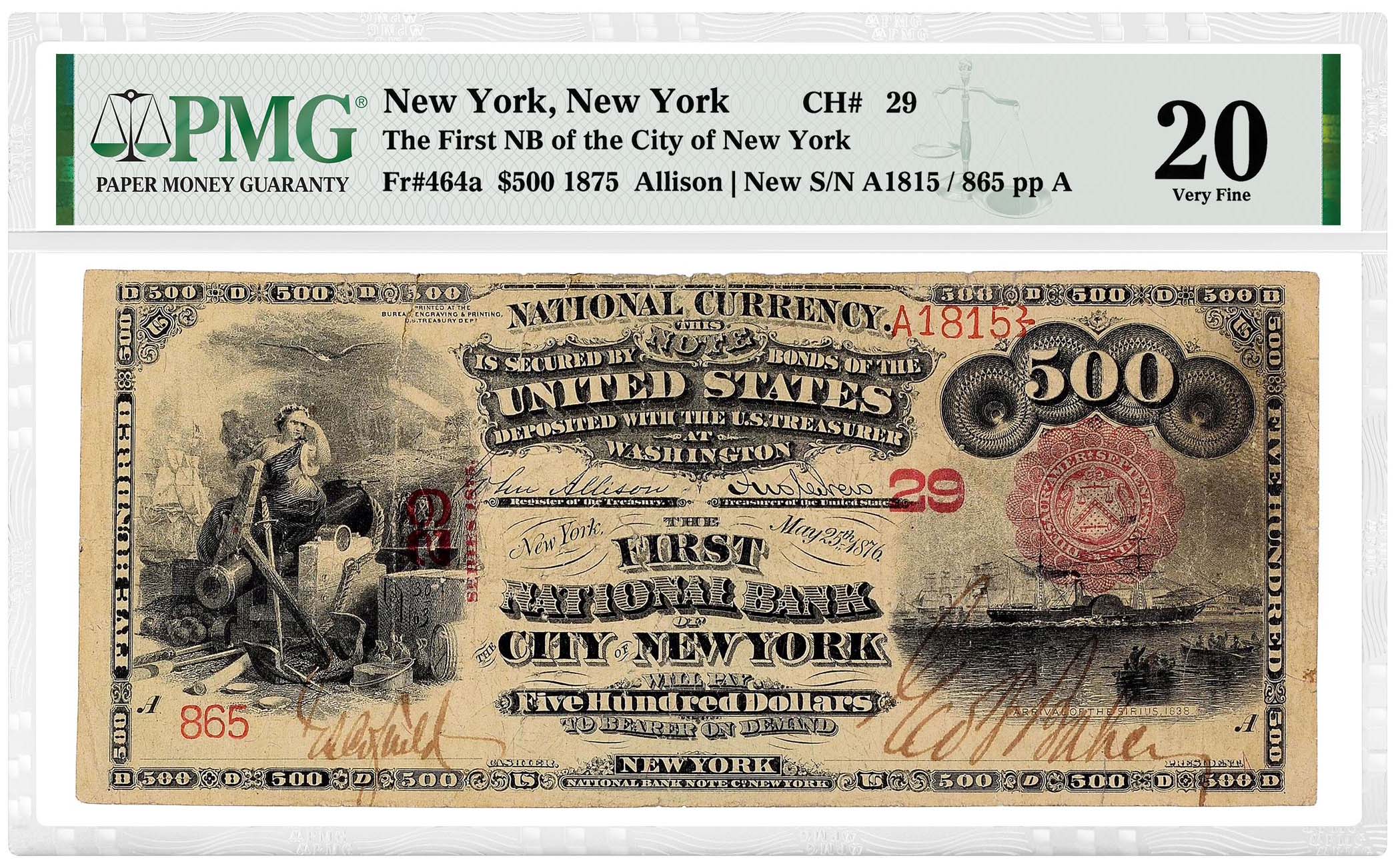 The only $500 First Charter in private hands

SARASOTA, Fla. (December 16, 2020) – Paper Money Guaranty® (PMG®) is thrilled to announce that it recently certified the extraordinary collection of National Bank Notes assembled by Andrew Shiva, one of the hobby’s foremost authorities on this fascinating currency. The expansive, museum-quality collection includes the rarest, most intriguing and most valuable National Bank Notes known to exist.

National Bank Notes were printed between 1862 and 1935. During this time, a bank could apply to participate in the National Banking System, and, once “chartered” by the Federal government, the bank was allowed to issue and circulate notes under its name.

There are four major categories of National Bank Notes: 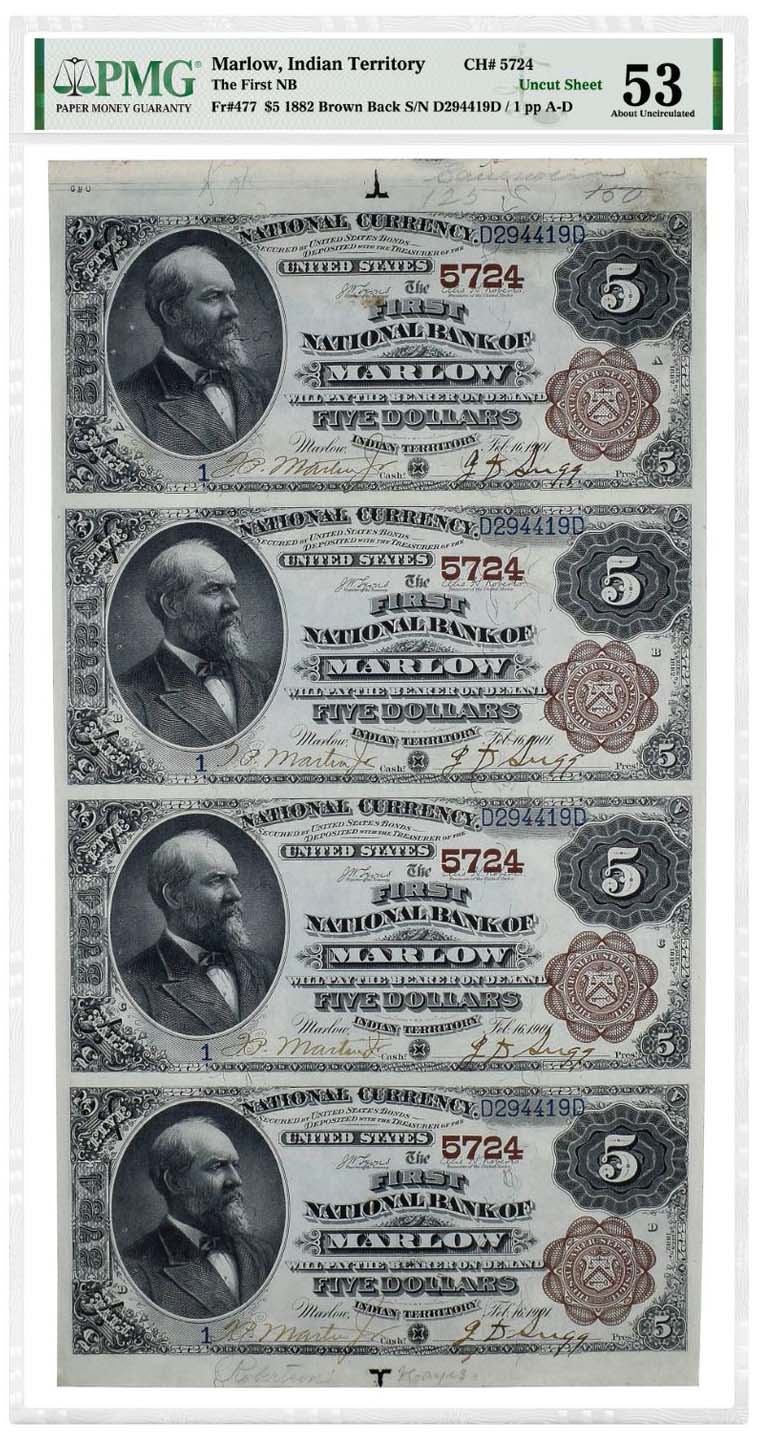 These categories represent major design shifts in the series.

Although earlier paper currencies had been created in the United States, National Bank Notes were extremely successful because they were trusted locally by people who knew the local bank, but they could also circulate nationally.

In all, 12,635 banks participated in the National Banking System and printed their own unique currency. The notes represent the territories, states and cities that comprised a developing nation as well as the enterprising people who drove the country’s progress. In the scope of US currency, “Nationals” also served as an influential precursor to today’s Federal Reserve-issued currency.

Ironically, Andrew Shiva was not in the US when he became aware of early American banknotes. At a Paris flea market in 1989, he noticed an unusual piece of paper money — something he had never seen before — a two-dollar bill from 1917. He was captivated by the engraving and artwork, but not even sure what it was.

When Shiva asked the proprietor of the stand about the bill, the man retorted, “It is your money.” And so began Shiva’s pursuit of US paper money issued before the current era.

Many collectors of Nationals focus on a particular state, town, bank, type, denomination or even signature, but Shiva’s collection is one without specific limitations. Indeed, he started with the broad goal of collecting 10 great notes from every state, but even that limitation did not hold, as the collection grew to include thousands of notes based on his own criteria for what is a great note.

The result is a collection in which nearly every piece is a highlight — whether because of rarity, a notable signature or distinct combination of attributes. Here is just a sampling:

The only $500 First Charter in private hands – Of the three $500 National Bank Notes in existence today, two of the original series notes issued by the Appleton National Bank of Lowell, Massachusetts are in institutional collections (the Smithsonian's National Numismatic Collection and the Federal Reserve Bank of Chicago). The Shiva note, a Series of 1875 issued by the First National Bank of the City of New York, is the only example in private hands. While a $1,000 First Charter note was issued, none are known to exist.

Uncut Serial Number 1 $5 Brown Back Sheet on Marlow, Indian Territory – There are only six uncut territorial sheets known, and two are in the ANA’s Bebee Collection. The Shiva example is the only #1 territorial sheet known to exist. It was issued by the First National Bank of Marlow, Indian Territory, which opened in 1901 and closed in 1909. During that time, the bank issued just over 4,000 notes, but the only four that have survived are found on this uncut sheet. 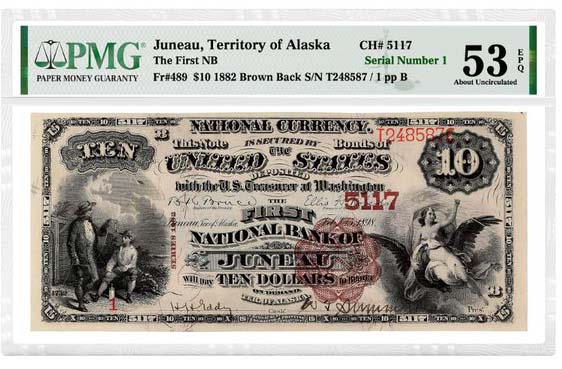 $10 Brown Back, The First National Bank of Juneau, Territory of Alaska

Over the course of amassing his collection, Shiva has contributed notes as well as his research to exhibits at the Smithsonian Institution’s National Museum of American History, and even helped to digitize the Smithsonian’s National Numismatic Collection with the goal of making museum pieces available to the public and expanding awareness of the country’s numismatic history.

“Assembling this collection has been a wonderful challenge that has brought me immense joy over the years,” said Shiva. “From the first time that I spoke with PMG about its CrossOver service, I could tell that they shared my passion and enthusiasm. The experience of working with PMG through the certification process — from the second-to-none customer service to the graders’ expertise to the superior PMG holder and high-resolution imaging — has been fantastic.”

“One of the first things that struck me about Andrew is how much he cares about the collecting community,” said Mark Salzberg, PMG Chairman. “His collection is without a doubt one of the most impressive that I’ve ever seen, but I was equally impressed with his knowledge and his willingness to share that knowledge. Andrew, thank you for giving PMG this amazing collection to certify and allowing us to disseminate all of the information that can be learned from your incredible achievement.”

Shiva’s collection represents a staggering accomplishment that serves as inspiration for current and future collectors. One intriguing note can be the start of a lifelong passion and meaningful contribution to not only the hobby, but also history.

In addition to authenticating, grading and encapsulating each note in Shiva’s collection, PMG imaged every note in high-resolution. These images will be made available to the public through a comprehensive online gallery at PMGnotes.com in the near future. With Shiva’s careful attention to detail, the gallery will be organized into collector-friendly categories so that everyone can enjoy the depth and quality of his magnificent collection.

Additional highlights from Shiva’s collection will be shared on a regular basis throughout 2021. To receive the latest news and research from PMG, subscribe to the free PMG eNewsletter at PMGnotes.com/join.