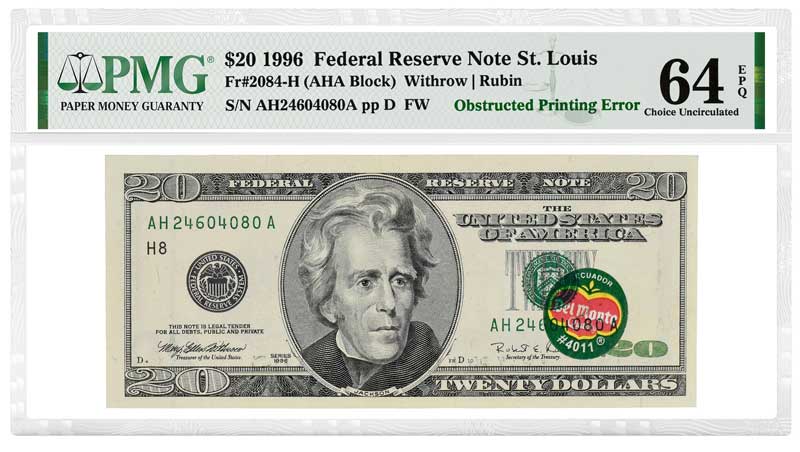 Considered by many to be the Holy Grail of paper money errors due to its spectacular printing irregularity, the incredible "Del Monte Note" is being offered by Heritage Auctions in its FUN Currency Sale, which has been rescheduled for January 21-25, 2021. 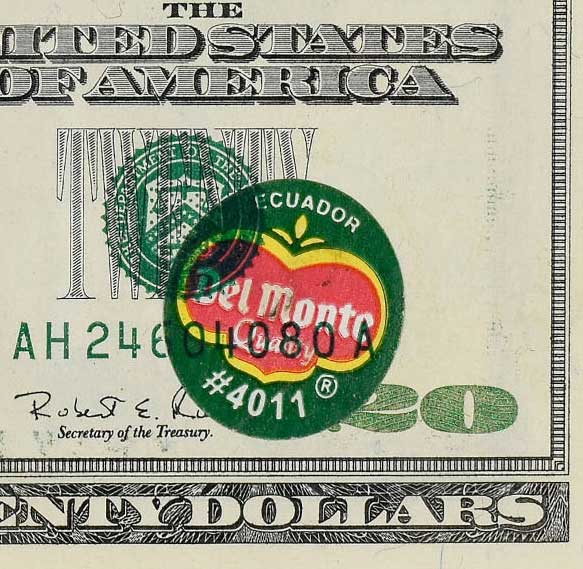 Close up of the BEP error printing over top of the Del Monte produce sticker. (Images courtesy of PMG.)

SARASOTA, Fla. (December 21, 2020) – Paper Money Guaranty® (PMG®) has certified the world-famous “Del Monte” error note – a 1996 $20 Federal Reserve Note printed over a Del Monte banana sticker! The incredible “Del Monte Note” is being offered by Heritage Auctions in its FUN Currency Sale, which has been rescheduled for January 21-25, 2021. Bidding is now open.

The Del Monte Note is considered by many to be the Holy Grail of paper money errors due to its spectacular printing irregularity. The 1996 $20 Federal Reserve Note from St. Louis (Fr.# 2084-H) is now graded PMG 64 Choice Uncirculated EPQ with a notation of Obstructed Printing Error with Retained Obstruction due to the colorful Del Monte Ecuador-branded banana sticker on the right side of the note.

“I have seen a lot of numismatic errors, but this one is in a league of its own. You can’t help but smile when you look at it,” said Mark Salzberg, Chairman of PMG. “PMG is thrilled to have certified this extraordinary piece of paper money history.”

In August 2003, Numismatic News reported that an Ohio college student received the Del Monte Note as part of an ATM cash withdrawal. It was then offered on eBay the same year, where it sold for $10,000 to an Arizona collector. The collector later consigned the note to a Heritage Auctions sale in January 2006, where it realized $25,000.

“Heritage Auctions is proud to again offer the famous Del Monte Note,” said Dustin Johnston, Director of US Currency at Heritage Auctions. “I am certain that PMG certification reassures collectors as they compete to bring home one of the greatest paper money errors."

The note appears alongside other PMG-certified US notes, including two $10,000 Federal Reserve Notes that each have an estimate of $125,000 to $175,000. (To read a separate PMG article about these and other highlights, click here .)

As can be seen on this note, the banana sticker covers the face plate intaglio design details (including part of the word TWENTY), but the Treasury Seal and serial number are partially printed on top of the sticker. This means the banana sticker became affixed to the sheet after the second print but before the third print.

For this to happen, the Del Monte sticker, commonly found on banana bunches in grocery stores, was placed or dropped on the sheet by someone at the BEP’s facility in Fort Worth, Texas, between the second and third stages of printing. The sheet with the stuck-on banana sticker was subsequently overprinted during the third stage of printing and escaped detection at quality control.

The ideal placement of the sticker, as well as the fact that the BEP Fort Worth cafeteria facilities are separate from the note-printing area, strongly suggests this was a deliberate act by an employee.

This exact note is pictured in the second edition of “US Error Note Encyclopedia” by Stephen M. Sullivan as an example of a Retained Obstruction printing error. Sullivan classifies Retained Obstructions as having the highest rarity rating: R9. Sullivan states that a Retained Obstructed error is caused when something comes in contact with an unprinted portion of a sheet of notes, remains intact during the printing and cutting process and is discovered with the note outside of the BEP.

Such obstructions can be caused by practically anything present at the BEP facility. More often than not, the obstruction is a portion of a sheet of currency or a piece of the wide margins that were trimmed. Most obstructions fall off shortly after printing, leaving a blank area on the note where the design is missing. Errors with objects that remain “stuck” to the note are very rare.

This 1996 $20 note is traceable to the BEP’s Fort Worth, Texas facility by the small “FW” found at the bottom right by the portrait of President Andrew Jackson. The second letter in the serial number identifies the Federal Reserve District — in this case, “H” identifies it as the St. Louis Federal Reserve District. It was printed in July 1998, the month that the Fort Worth facility printed serial numbers AH00000001A to AH38400000A. Incidentally, the number on the sticker (4011) is a Price Look Up (PLU) code reserved for bananas.

The note earned PMG’s Exceptional Paper Quality (EPQ) status because PMG defines an EPQ note as being completely original and not having been physically, chemically or materially processed to give the appearance of a higher grade. If a collector added a banana sticker to a note and submitted it to PMG for grading, the note would not achieve EPQ status. However, in this case, the note was printed by the BEP with the banana sticker on the paper during the final overprinting process, so the note is an “as-made” error by the BEP and is considered to be completely original.

This note was submitted under PMG’s popular CrossOver service, which enables notes encapsulated in a PCGS-branded holder to be considered for PMG certification without first being removed from the holder. For more information on PMG’s CrossOver service, click here .