PRESS RELEASE: 21st Edition of Friedberg’s Paper Money of United States, in full color, to be released in multiple formats on October 23

Sixty-four years after its introduction, the twenty-first edition of Paper Money of United States, the standard reference book on United States paper money, is being re 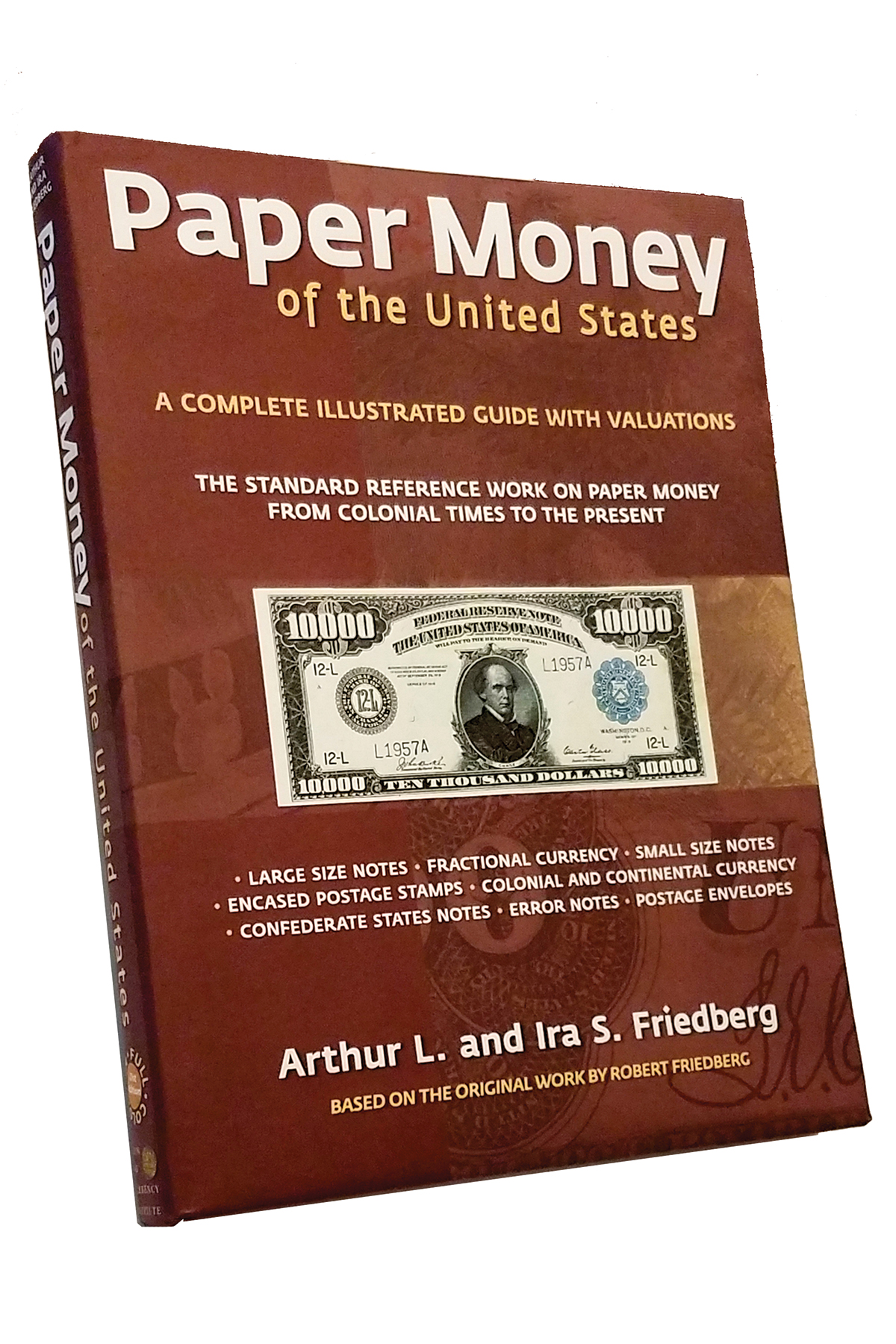 PRESS RELEASE: 21st Edition of Friedberg’s Paper Money of United States, in full color, to be released in multiple formats on October 23

Sixty-four years after its introduction, the twenty-first edition of Paper Money of United States, the standard reference book on United States paper money, is being released by the Coin & Currency Institute. In 1953, the late Robert Friedberg (1912-1963) broke new ground when the Treasury Department granted permission for photographs of American paper money to be printed for the first time. The current edition’s 328 pages sets the standard once again by featuring notes from America’s greatest currency collections, all reproduced in color.

The inaugural edition of Paper Money of the United States also introduced other innovations never before attempted. The subject became standardized and the book earned a permanent place on reference shelves. During the past three decades, it has been completely expanded, revised, and edited by Arthur L. Friedberg and Ira S. Friedberg.

As with any price catalog, the twenty-first edition of Paper Money of the United States is a snapshot in time – and as the new edition debuts, it shows that the market for paper money market is stable, with notes of great rarity or top quality often setting price records every time they are sold. As with every edition, all valuations have been adjusted to reflect market conditions, which are mostly up. These prices are given in up to seven states of preservation from Very Good (VG8) to Gem Uncirculated (Gem65). There are also several other significant additions and revisions to the new volume, including motes never before known to exist, making it a necessity for every collector and dealer of American currency.

From the first year of Federal paper money, 1861, to the present, the fronts and backs of all classes and types of currency, from 3 cents to 10,000 dollars are illustrated. These are accompanied by text listing, describing and pricing every variety of paper money ever issued, more than 10,000 prices in all. With close to 1,000 color photographs, the result is a complete pictorial, descriptive and numismatic history of the currency of the United States.  There are supplemental sections on Continental and Colonial Currency (notes issued from 1680 to 1788), the Treasury Notes of the War of 1812, considered by some to be the first national currency, a comprehensive listing by type of the issues of the Confederate States of America, and sections devoted to paper money errors, postage envelopes, and encased postage stamps. The latter two, along with Fractional Currency, were created to alleviate the shortage of change needed for commerce during the Civil War. The listing in the Appendix of the 14,348 National Banks that existed from 1863 to 1929  also shows the numbers of large size and small size notes known to exist for each note-issuing bank. The Appendix also includes information on uncut sheets of small-size notes, including the modern issues sold by the Bureau of Engraving and Printing.

Paper money collectors depend on the Friedberg Numbering System™, a uniform method of cataloging bank notes that is the international standard for American currency. This numbering shorthand, along with the hundreds of photographs, enables anyone to instantly locate a specific banknote, and allows a dealer to advertise a note without need of extensive description. A distinguished panel of acknowledged experts on paper money has assisted the authors, enabling them to establish accurate and up-to-the minute valuations for all issues.

Paper Money of the United States has been an invaluable asset to currency collectors and numismatists for generations. It possesses an appeal and value of its own, not just to lovers of Americana and of the fine art of engraving, but to students of American history, finance and economics. It is recognized as a landmark work and is the undisputed standard reference on American currency – internationally acknowledged as the most comprehensive and universally quoted guide on the subject. Banks in America and throughout the world will find this book especially useful in that it makes possible the immediate identification of all obsolete but still legal tender paper money, while simultaneously giving the collector’s value of each note. It is a book which belongs in every library, public and private.

Sample pages from the 21st edition may be seen on the book’s website, www.PaperMoneyoftheUS.com.