Formulating a strategy for pricing coins is the biggest challenge facing Greysheet. 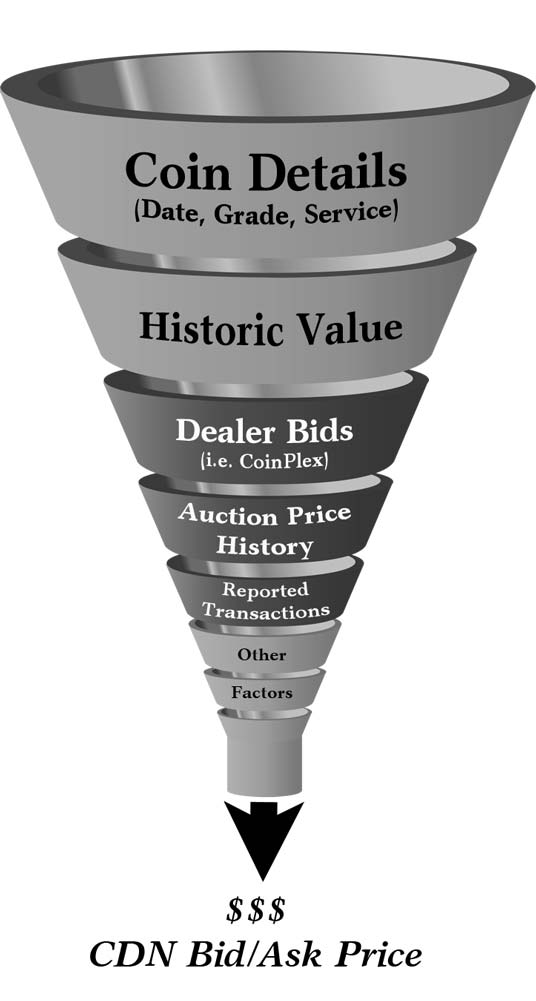 Since I took over as publisher at CDN in August there have been many challenges, from managing the software to moving the company to the East Coast. The most interesting and difficult challenge, however, has been formulating a strategy for pricing coins.

The CDN pricing sheets were created in 1963, and came of age in the 1970s and 1980s – a time when coin dealing was largely confined to auctions, coin shows and dealer interactions. Online coin-trading “teletype” networks emerged in the 1970s and dealers were suddenly able to trade coins electronically. But the world moved more slowly back then and pricing changes were easy to monitor and relatively stable. CDN became extremely popular as the go-to source for wholesale pricing information and coin dealers nationwide were seen with folded copies in their back pockets. Like the iPhones of today, no dealer worth his salt would dare stray more than five feet from his Greysheet.

With the advent of third-party grading services – PCGS and NGC – in the late 1980s, CDN added a new product in 1987 called “The Certified Coin Dealer Newsletter,” or Bluesheet. The Bluesheet was a visionary product, ahead of its time. Ron Downing, then publisher, saw the need for another dimension of pricing certified coins on a sight-unseen basis. With the Blue representing the low end of pricing spectrum, dealers used the Blue and Grey together as a “spread” – their values serving as book-ends to determine where a certain coin under consideration should fit in that range.

Over the following two decades, the certified coin market matured in many ways. The two major grading companies honed their skills and grew their companies into large concerns with hundreds of employees. The concept of “registry” sets was created and collectors soon began competing for best-of-class collections. Values for coins at the top end of the grading range started to rise disproportionately. With these rapid price changes also came a greater uncertainty in the market and the roller coaster of coin valuation has been present ever since. One could also argue that the incessant flow of information, internet trading and other factors contributed to these cycles.

During the 1990s and early 2000s, the Greysheet maintained its position as the top reference for pricing information, but profound changes in the coin market slowly started to erode the formulas that the CDN analysts had established in the 1980s for valuation. For example, the pricing analysts at CDN used the teletype, or electronic networks, as a primary source of market making. As a coin dealer, I would often call the CDN editors and inquire why the value of the XYZ coin in MS65 had not moved up $5,000 even though I had just purchased one in a public auction for this amount. I and others like me were told that the “Bid” would only change if I went on to the trading network and posted a “Bid" in the new amount for this coin. Only then would the sheets reflect the new value.

My argument was, “Hey, I just bought one for $40,000, I don’t really want another one. But clearly it’s worth $40,000 wholesale.  As time went on, the CDN sheets became more and more out of date with the current market because the analysts weren’t picking up on market data like live auction and actual dealer sales. In other words, the “Bid” system of the 1970s was starting to break down in the 1990s. Also, during this time, live auctions became a much bigger factor in the industry. Heritage Auctions, for example, became a huge force with auction results regularly in the tens of millions of dollars. Again, CDN editors chose to ignore most of this data on the assumption that their results somehow did not reflect the current market. Dealers like myself became increasing disenchanted with levels and started to use pricing tools that incorporated multiple pricing data, like auction data, certified populations, CDN and other price guides like Coin Universe (CU) and Coin World Trends. As a dealer who spent 365 days a year immersed in the coin industry, I became extremely proficient in using all of this information to distill a single price for a specific coin. As I was doing so, I often day-dreamed that one day the CDN would re-establish itself as a primary source for pricing information. If the pricing is incorrect – either too high or too low – buyers and sellers are going to make mistakes or, worse, lose confidence in the market.
Thinking about other full-time and part-time coin dealers, one often wondered how they would properly discern the value of a specific coin without all of this knowledge and experience. This insider knowledge was an advantage for me as a buyer, but as a seller it was a frustrating challenge to sell a coin that was worth multiples of the value in the printed sheets.

Be Careful What You Wish For

With all of this background in coin valuation and history with Greysheet and Bluesheet pricing, you can imagine my surprise when I received a phone call earlier this year that CDN was up for sale. I had spent 20 years dreaming of how I would determine coin pricing more accurately. It’s been less than two months since I have taken over full responsibilities at CDN and the challenge is really clear. This is NOT going to be easy.
The coin market has only become more complicated in the last decade. Specifically, CAC (http://www.caccoins.com) has established itself in the market. CAC needs little introduction to the readers of this publication but, in short, they simply put a sticker on a specific PCGS or NGC graded coin that “meets or exceeds its stringent standards.” This service, while controversial at inception, has become wildly popular among serious coin collectors over the past 5 years but added further complexity to the pricing equation. It is not unusual in some cases for a coin to sell for 50-100% more than the exact same graded item without the sticker. The reasons for this can vary widely. For example, the grading standards of a specific series may have loosened over some period of time; or simply the standards of the different grading services are different and CAC may have a much stricter interpretation of the grade than the third-party grader. Regardless, as the editor of a one-price-fits-all pricing guide, we have a lot of variables to consider.

Setting a Baseline with the Bluesheet

Now that I sit in the publisher’s chair at CDN, I have only just begun to consider how I will approach the strategy of pricing all of the coins in our various newsletters. For starters, I aim to bring back the relevance of the Bluesheet as a defining value for the baseline coin values of a specific issue graded by PCGS and NGC. Of course anyone can set a “safe” price that is unnaturally low. It doesn’t help you (as a buyer) if CDN prices a 1921-S Walker in PCGS MS65 at $50,000 if the last three auction results for these have ranged between $70,000 and $117,500. If you walk up to a seller at a coin show with an offer of $50,000 you will be summarily dismissed from the booth. We had real discrepancies like this on the Bluesheet in series like Matte Proof Lincolns. We are now slowly, and deliberately, working to fix these prices.

In most cases, our pricing strategy for Bluesheet is to use all of the tools at our disposal to determine the lowest realistic market value for an item. In the case of the 1921-S Walker, I like the $70,000 level for PCGS MS65 as a baseline. As a wholesale buyer, you may be very fortunate to find a coin for less money, but I suspect you are going to have to pay somewhere between $70,000 and the now $98,000 Greysheet value. If a coin is really nice, and has a CAC sticker, you may pay even more, like the recent transaction at Heritage where an example realized $117,500. (August 2015, lot #4135).

Completing the Spread with Greysheet Values

As I’ve indicated, on the Greysheet (Weekly, Monthly Supplement and Quarterly) side of pricing, we are looking towards the high end of market values for coins. In these sheets, we want to represent what a nice, high end example of a coin is worth. There will always be outliers, as well. In the 1921-S MS65 Walker example above, we felt that the $117,500 auction result was above-market as another CAC example sold a year earlier for $88,125 (Heritage, 6/14, Lot #30582). Based on this data, other auction results, personal knowledge of the series and dealer transactions we’ve recorded over the past two years, we set the current Greysheet for this item at $98,000. Now that you can see the different factors that we have to consider on EVERY coin, you can also understand that these values are an INDICATION ONLY. To our knowledge, no single dealer is offering $98,000 for a gem 1921-S Walker today. If you are offered an example, we encourage you to use both the Blue and Greysheets as a starting point for determining the value of the coin.

Over the next 12 months at CDN, we plan to examine every coin and price in our sheets to represent the best Bid/Ask indication possible. We will certainly make mistakes along the way, and we have been happy to make corrections as soon as these are brought to our attention. We have set up a new e-mail address of editor@greysheet.com. We’d love to hear from you, so please let us know your thoughts. And if you are not currently a subscriber to the Bluesheet, we strongly urge you to get back on that list. There are a lot of great things coming!