BY JOHN FEIGENBAUM, PUBLISHER &amp; PATRICK IAN PEREZ, EDITOR This issue of Quarterly II is highlighted by the addition of new pricing in multiple series. In all we hav 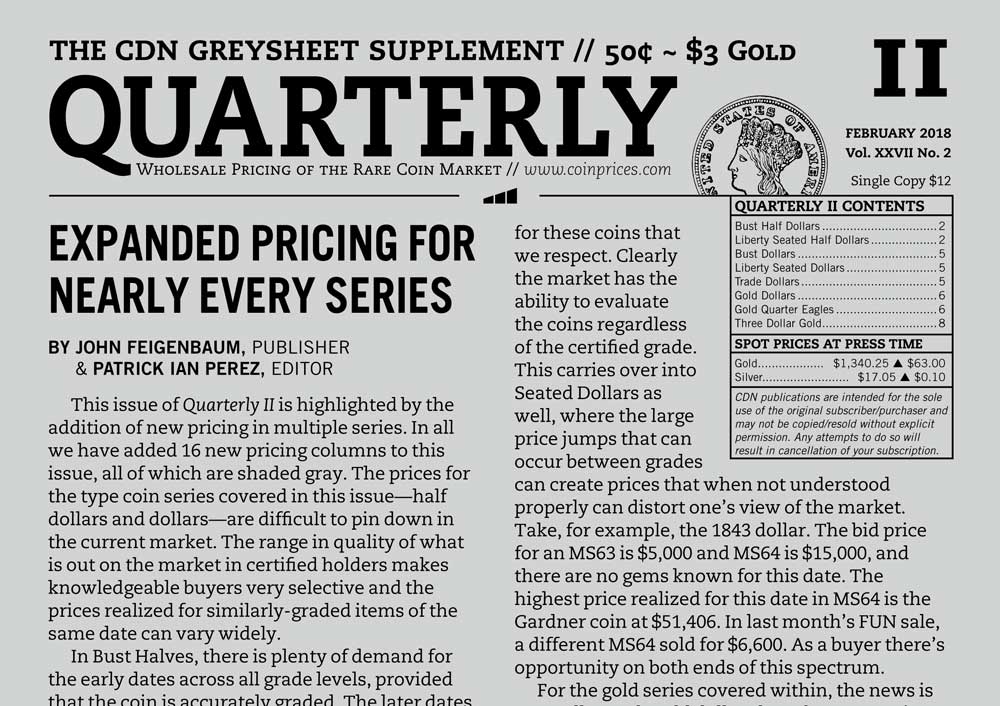 This issue of Quarterly II is highlighted by the addition of new pricing in multiple series. In all we have added 16 new pricing columns to this issue, all of which are shaded gray. The prices for the type coin series covered in this issue—half dollars and dollars—are difficult to pin down in the current market. The range in quality of what is out on the market in certified holders makes knowledgeable buyers very selective and the prices realized for similarly-graded items of the same date can vary widely.

In Bust Halves, there is plenty of demand for the early dates across all grade levels, provided that the coin is accurately graded. The later dates of the series, starting with 1828 and later, have been soft, primarily in the mint state grades. For Seated halves, much of the activity is in the split grades, such as XF45, MS61, and MS62, so be sure to refer to our online price guide and mobile app for those prices. One area that remains strong in this series are the low mintage dates of the 1880s. Bust silver dollars are even more contentious. While circulated coins (primarily XF and AU) do sell in auction below our numbers at times, there are multiple legitimate sight-seen bids for these coins that we respect. Clearly the market has the ability to evaluate the coins regardless of the certified grade. This carries over into Seated Dollars as well, where the large price jumps that can occur between grades can create prices that when not understood properly can distort one’s view of the market. Take, for example, the 1843 dollar. The bid price for an MS63 is $5,000 and MS64 is $15,000, and there are no gems known for this date. The highest price realized for this date in MS64 is the Gardner coin at $51,406. In last month’s FUN sale, a different MS64 sold for $6,600. As a buyer there’s opportunity on both ends of this spectrum.

For the gold series covered within, the news is generally good. Gold dollars have been an active series of late, and the better dates of the series are easily absorbed into the market when they are offered at prevailing prices. One scarce date that has received some attention lately is the 1861-D, and this Civil War date sees increases this month. In early quarter eagles, we have four new price columns, and for Liberty Head quarter eagles we have added MS61 so that all of the mint state grades are covered through MS65. These and Three Dollar gold pieces remain steady.