Historic silver and gold coins discovered in the purser’s lock box in 2014 from the fabled “Ship of Gold,” the S.S. Central America that sank in 1857, are coming to mar 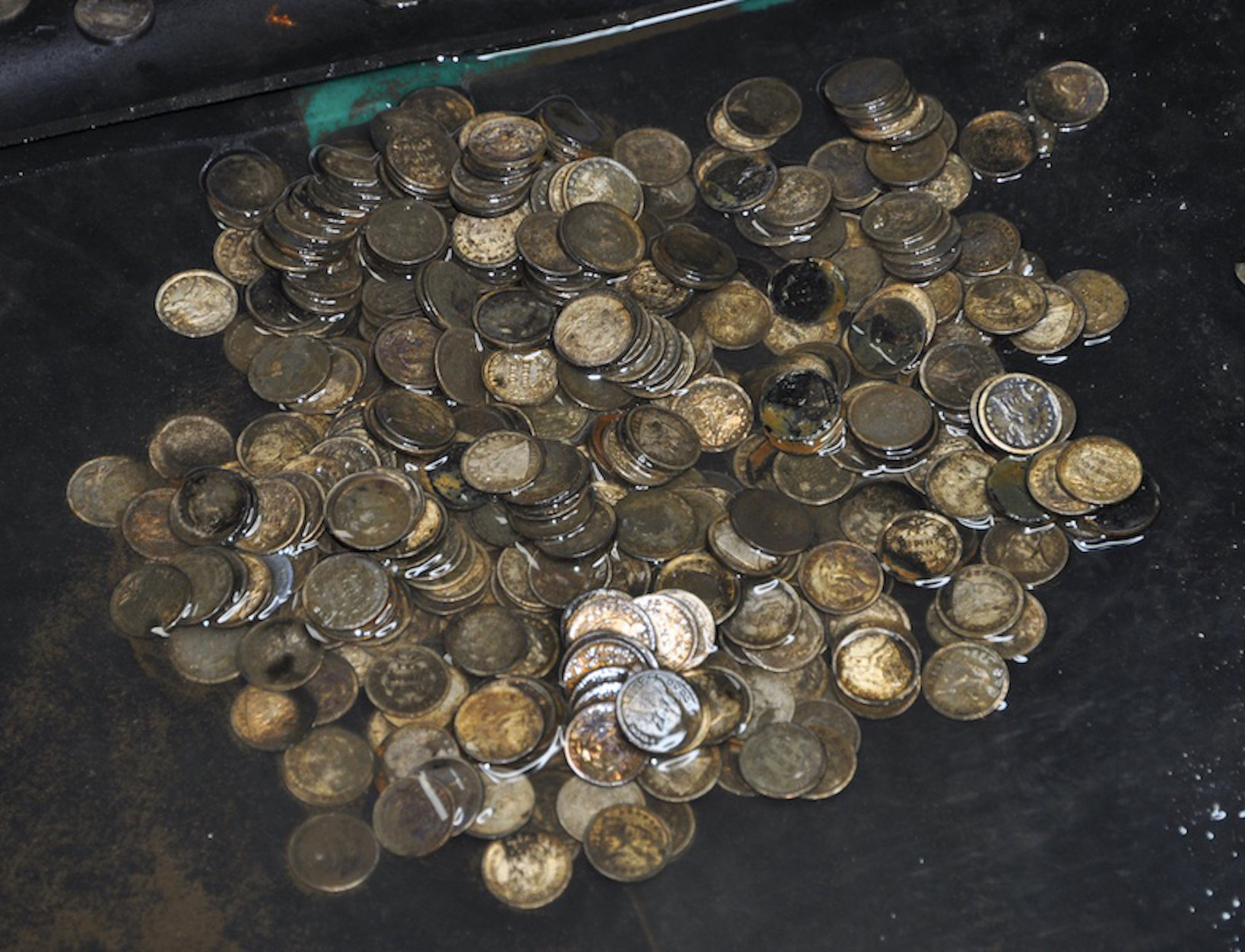 Historic silver and gold coins discovered in the purser’s lock box in 2014 from the fabled “Ship of Gold,” the S.S. Central America that sank in 1857, are coming to market for collectors, according to the California Gold Marketing Group LLC (CGMG) of Brea, California.

“Two bags found in the purser’s box contained a combined total of $1,588.95 face value of U.S. coins from silver dimes to half eagle $5 gold coins, and ranged in dates from 1796 to 1857,” revealed CGMG Managing Partner Dwight Manley. “Most of the coins are dimes that were to be used in daily commerce while the ship sailed between Panama and New York City before sinking in a hurricane off the North Carolina coast in September 1857.”

One of the dimes is an 1838-O that was overstruck at the New Orleans Mint with dies intended for an 1842-O quarter. Manley said the “35-cent” error coin is not for sale, but will be publicly exhibited. It apparently circulated for 15 years before becoming sunken treasure with the other coins now recovered from the S.S. Central America.

The well-preserved silver coins discovered in the purser’s sealed iron box are being carefully examined, cataloged and certified by Professional Coin Grading Service.

“One of the recovered canvas bags at the bottom of the box was about the size of a volleyball and it contained thousands upon thousands of dimes. It quickly became obvious that this was the ‘cash box’ of the ship, a truly marvelous historical find,” said Bob Evans, the chief scientist on the 1980s mission that first located and recovered a portion of the fabulous sunken treasure and who served in that same role and as a numismatist with the 2014 recovery.

“The purser’s bags, one with dimes and another with primarily silver quarter dollars and half dollars, were inside a box we found in a corner of the safe that was on its side when we found it. The box was flimsy, and it collapsed when we attempted to move it with our remote-controlled, spatula-like tool over 7,000 feet deep under water. There were other contents of the safe including some paper artifacts and a pistol,” Evans revealed.

The purser’s bag contained 8,873 US dimes, 503 quarters, 345 half dollars, and a smaller bag inside the large one contained 55 gold dollars, 56 quarter eagles and 41 half eagles. Additional gold and silver coins, perhaps brought onboard by S.S. Central America passengers, were found elsewhere in the safe for a combined total of 9,877 coins.

“The dimes in the purser’s bag survived 157 years in the Atlantic Ocean without the corrosion seen on most silver coins found on shipwrecks. This is undoubtedly due to the oxygen-starved (anaerobic) conditions within the safe, creating a deep-sea time capsule,” explained Evans. “The safe was not water tight, but it essentially sealed off the interior environment and its chemistry from the outside seabed environment. The result was that even the canvas bag holding these coins did not degrade significantly,” explained Evans. Universal Coin & Bullion of Beaumont, Texas, now is selling many of these recovered silver coins.

The SS Central America was a 280-foot long, three-masted side-wheel steamship carrying tons of California gold that had been shipped from San Francisco to Panama when she sank on September 12, 1857 hurricane during the final leg of a voyage from Aspinwall (now Colón), Panama to New York City. The loss of the ship’s gold cargo was a major factor in the economically devastating financial panic of 1857 in the United States.

“These coins found in the purser’s safe made up the working money of the ship. The sailors of the labor class were paid one to three dimes a day. Remember that in 1857 the S.S. Central America was on its 44th voyage to Panama and back since its launching in November 1853. This was a well-established business, and here we get to look at the life-blood of that business, its working capital. It is fascinating to see everything that was in circulation in 1857, including some bent, pierced and heavily worn coins,” said Evans.

“Some of these could have been used as ‘magic charms.’ If it weighed something close to a tenth of an ounce, it passed in circulation as a dime,” he explained.

“One-by-one examination and certification of the coins recovered in 2014 began in January 2018. Virtually all of the 3,129 federal, private mint and world gold coins that were retrieved in 2014 now have been sold. The silver coins from the purser’s safe are the final items curated and are now coming to market,” said Manley.

A complete list of all the items recovered in 2014 will be published in an upcoming book, America’s Greatest Treasure Ship: The S.S. Central America, by esteemed numismatic author Q. David Bowers and Manley.

The actual selling price of the silver coins and which ones are actually available seem to be closely guarded information.