Greg Reynolds takes a deep dives into one of the most common Saint Gaudens $20 double eagles as a case study for valuation. 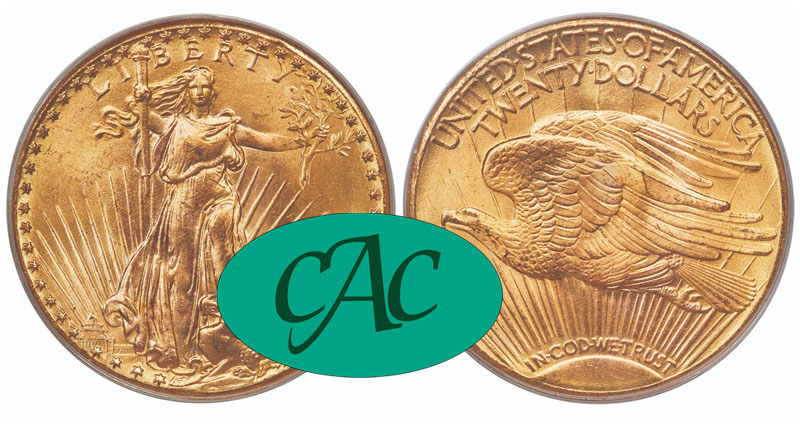 The markets for the most popular of all CAC approved gold coins are very difficult to analyze. These are gem quality Saint-Gaudens double eagles of the most common dates, usually 1924, 1925, 1927 and 1928 Philadelphia Mint coins. The purpose here is to explain the factors that must be considered in order to attain some understanding of CAC premiums for these.

I am referring to CAC approved Saint-Gaudens $20 gold coins that are NGC or PCGS certified as grading MS65, MS66 and MS67, gem grades. These are among the most liquid of all quality, classic U.S. coins. They tend to stay in dealer inventories for a very short term, often for less than an hour. An underlying theme here is an examination of trends in the values of CAC approved choice to gem mint state Saints since the inception of The CAC Rare Coin Market quarterly, a CDN publication, in August 2019.

As The CAC Rare Coin Market Review is the only periodical devoted to value estimates of CAC approved coins, and enables newcomers to easily learn about these value estimates, this publication is an appropriate source for data regarding recent trends in the values of CAC approved, MS65 and MS66 grade Saints. These are the cream of generic gold coins.

As 1924 is the most common and most likely to be telemarketed, the focus here is on 1928 Saints, which are the second most common. These are often seen at coin shows and in coin stores. They tend to have a cool and enticing appearance, which attracts collectors.

While it understandable that coin collectors would be willing to pay premiums for CAC approved coins for sets, the premiums for common date Saints are puzzling and more complicated. There could not be more than fifty people currently assembling sets by date (and mint location) of Saints in gem grades.

If a collector demands a CAC approved 20th century gold coin in MS67 grade, then a Saint would be a logical selection. It is impossible to assemble a 20th century, CAC-only gold type set with all coins grading MS67. CAC has approved zero Indian Head quarter eagles at the MS67 grade level.

There are wholesalers who tend to stock non-CAC, PCGS or NGC graded MS65 and MS66 Saints in quantities. CAC or not, MS65 and higher grade, common date Saints tend to retail for amounts well over the value of their gold bullion content. On April 1, 2021, around 5:00 PM, the Greysheet website reported that the price of gold was $1,728.30 per Troy ounce. This means that each uncirculated Saint then had a melt value of $1,672.13. An uncirculated Saint contains 0.9675 Troy ounce of gold.

In the first chart I included data from around 11/01/20 to 04/01/21. The November 2020 Monthly Greysheet cited a gold bullion value of $1,894.70. As the Monthly Greysheet does not include CPG® retail values and does not include CAC value estimates for all pertinent grades, I extrapolated a few of the figures in both charts here, which I take to be consistent with the CDN-CPG® system. Besides, typographical or other errors may occur. 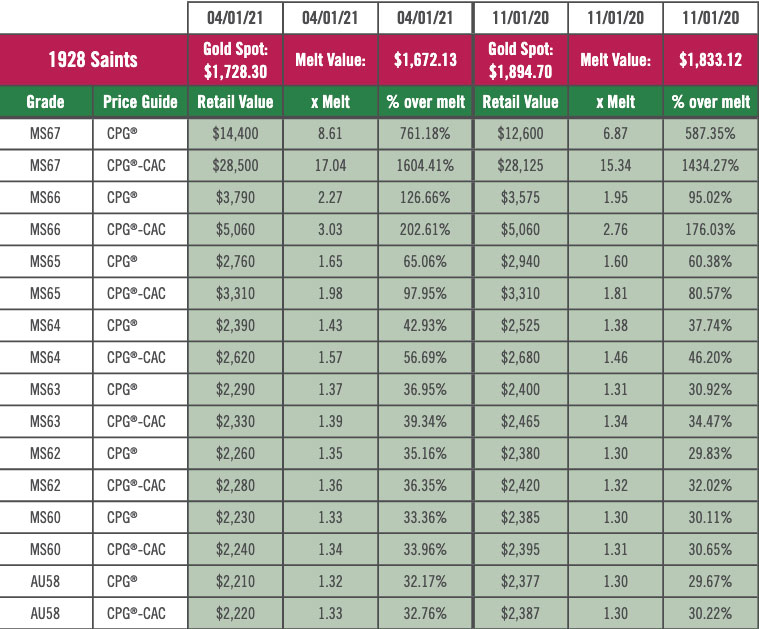 No one should rely heavily on data in this discussion while making buying or selling positions. The data here is being used to illustrate concepts and trends. The data presented here is not intended to be used as a tool for speculation. I am not providing advice in this discussion. Indeed, I am not now recommending for or against the purchase of any Saints. Coin buyers are encouraged to read, research, observe, ask questions and think for themselves.

It is apparent that CAC approved, gem quality 1928 Saints are worth substantially more than their non-CAC counterparts. For AU58 to MS63 grade 1928 Saints, however, the difference in estimated value is small, in the range of 0.4% to 2%. These tend to be worth between 32% and 40% above their gold bullion content. While a premium over bullion in the range of 35% is large for a common gold coin, it is small enough such that there could be a substantial correlation with changes in gold bullion prices.

MS64 grade Saints constitute a dividing line. Demand for them is largely independent of gold bullion values. MS64 grade generic Saints, though, are not worth nearly as much as gems, MS65 and higher grade coins. Most collectors of 20th century gold coins strongly prefer gems to MS64 grade coins. 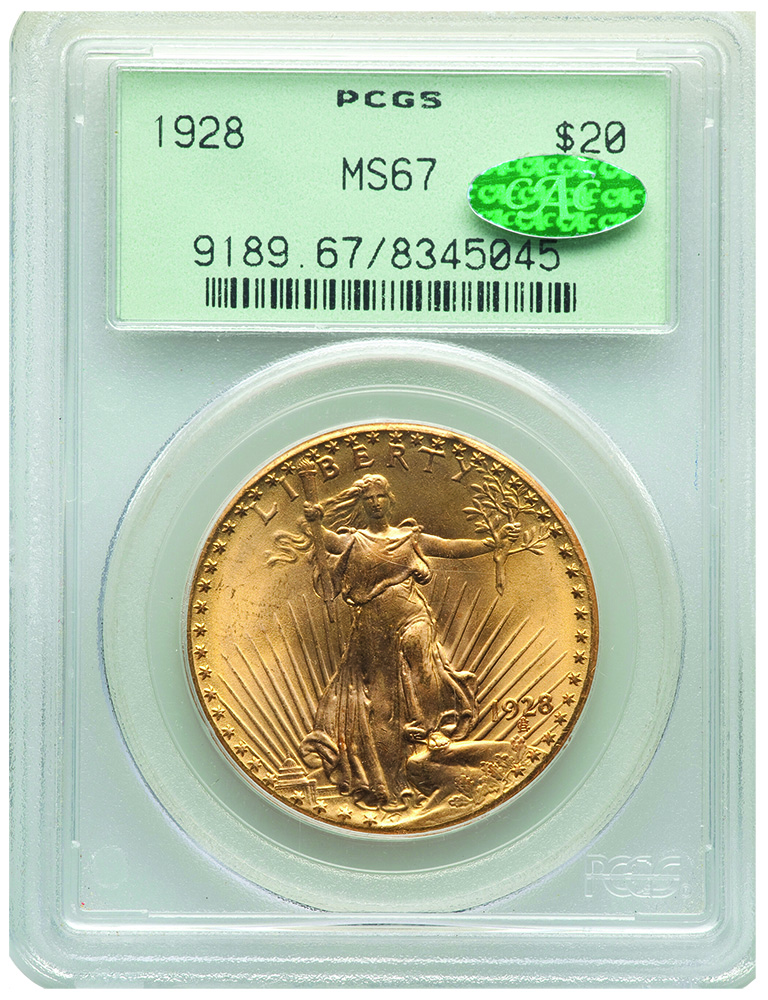 Assuming that a buyer has already decided, for whatever reason, to acquire a quantity of MS63 grade Saints, it would probably be worthwhile to pay a 3.5% premium for CAC approved coins. The founder of and sole finalizer at CAC, John Albanese, is the leading expert in Saint-Gaudens double eagles.

For MS65 and MS66 grade Saints, the CAC premiums over corresponding non-CAC coins varied tremendously from August 2019 to February 2021, and the premiums over melt value for CAC approved coins varied to a large extent, too. If there is any relationship between changes in the market levels for CAC approved MS65 or MS66 1928 Saints and changes in prices of gold bullion, it is not evident in this data sample. Moreover, when I researched generic gold in 2011, I found very little correlation between market levels for MS64 to MS67 grade generic gold, including 1928 Saints, and gold bullion levels. Since 2019, however, there does seem to be substantial correlation between price changes for generic Saints that grade below MS64 and gold bullion prices. 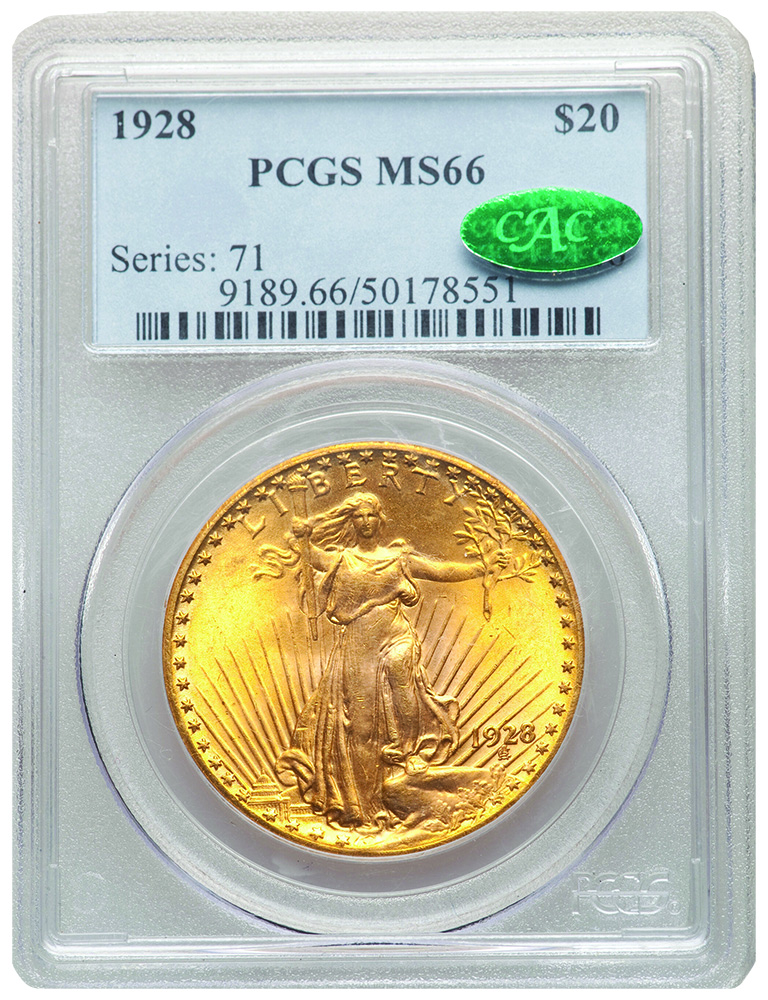 CAC approved MS64 grade 1928 Saints rose in estimated value by 25.77%, more than twice the increase in value of gold bullion during this same short time period from press time for the February 2020 issue to the press time for the August 2020 issue. CAC approved MS64 grade 1928 Saints were three percentage points ahead for their non-CAC counterparts. All such data is misleading as many people examining such data seem to think that value increases are automatic or based in logic. In reality, values of 1928 and other generic Saints are very much affected by dealer advertising and/or promotional campaigns of telemarketing firms. 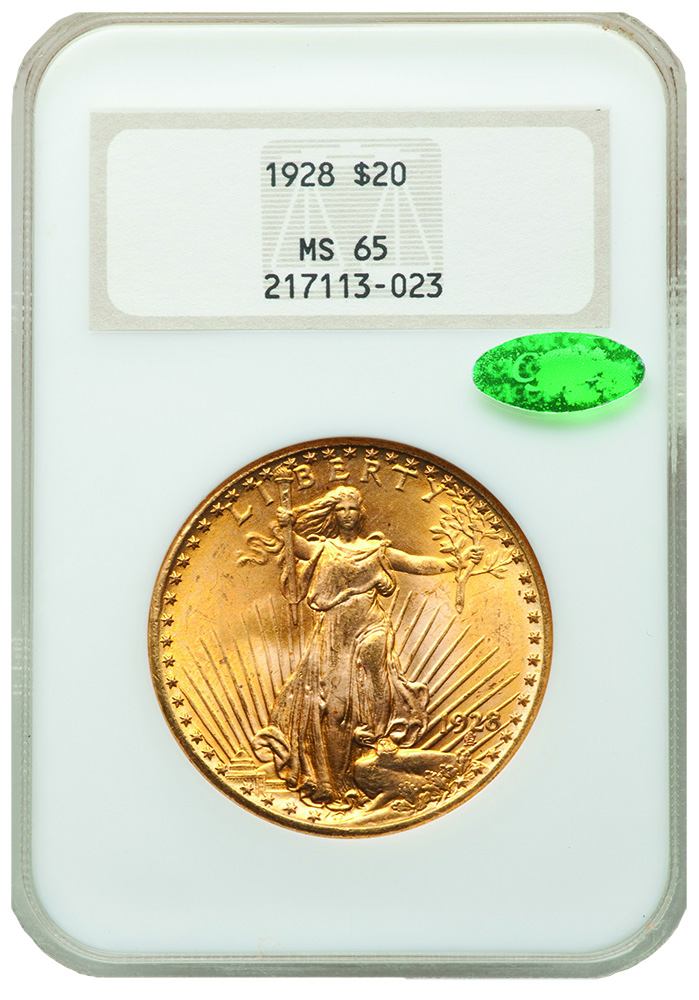 In my opinion, over the long run, CAC approved Saints are far more likely than non-CAC Saints of the same respective certified grades to be appreciated by people who are able to grade them. Moreover, CAC approved Saints are likely to be very much desired by coin buyers who are honestly advised by coin experts about the quality of individual coins. Speculation and connoisseurship, however, are different pursuits. It does not necessarily follow that a superior coin will rise in value to a greater extent than an inferior coin.

Also, coin markets are cyclical. During some periods, both CAC approved Saints and their non-CAC counterparts will fall in value.

Subscribe to May 2021 edition of CAC Magazine for the industry's most respected pricing and to read more articles just like this.

Great article, Greg. PCGS CAC MS67 Saints are a very magical item in numismatics. The demand is wide and far. Id pay 31k for the OGH 67 you posted, BTW!