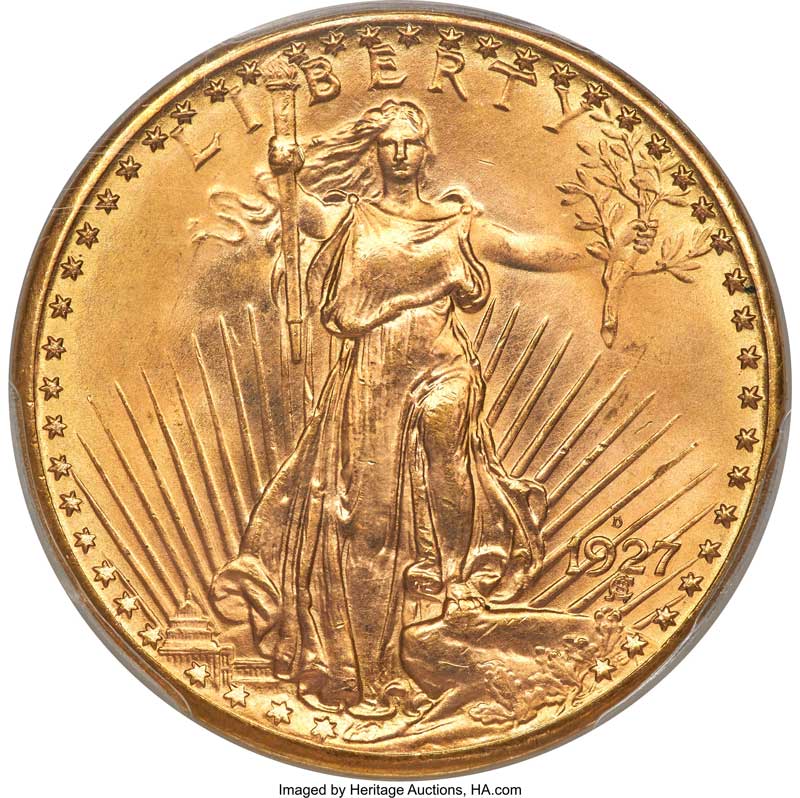 This magnificent coin led the event to $67,901,923 in total sales – making it the highest-grossing ANA-partner rare coins auction ever held.

“It only makes sense that an exceptional coin from such an extraordinary collection would be the top lot in an event of this magnitude,” Heritage Auctions Executive Vice President Todd Imhof said. “The results of this event underscore the fact that the world’s most serious collectors of U.S. coins realize Heritage is the premier destination for elite coins from elite collections.”

“We expected the strength of the $20 Saint market to continue into the sale of Mr. Simpson’s collection, but certain results still far exceeded our estimates,” Imhof said. “What was most remarkable to me about the $4.44 million sale was the fact Heritage delivered at least five bidders on the 1927-D $20 who remained engaged on the coin even at it surpassed $3 million.”

That the record-breaking coin comes from Simpson is not surprising; his collection has been ranked by Professional Coin Grading Service (PCGS) as one of the finest ever assembled.

Seventy-six lots from the Simpson Collection were sold in the auction; the top five prices all were Double Eagles. Highlights from the collection included, but were not limited to:

The 1927-D Double Eagle was not the only coin in the sale to reach double figures. Between 300 and 400 examples of the 1793 B-3, C-3 Half Cent, MS66 Brown are believed to have survived, one of which also cracked seven figures when it sold for $1.005 million. It is one of 235 lots in the auction from the James R. McGuigan Half Cent Collection , which yielded 14 other lots that brought more than $100,000. Included among the other highlights from the collection: 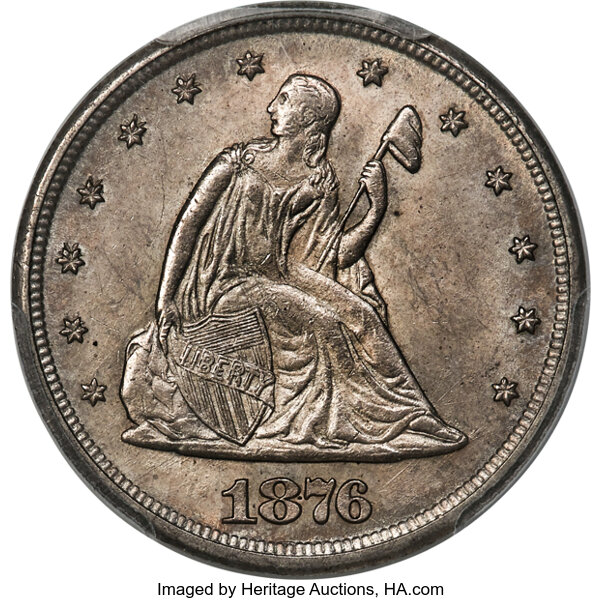 Bender Family Collection
Another highlight in the auction was an 1876-CC Twenty Cent Piece, MS65 , which drew 57 bids before ending at $870,000. This beauty is from the collection of Tom Bender, a trove that included the finest PCGS Registry Set of Carson City coinage, the finest complete certified $3 Gold Proof set ever assembled, an Indian Cents Basic Proof set that is ranked No. 2 all-time finest in the PCGS Set Registry and a Lincoln Basic Circulation Strike set that is ranked No. 3 current finest, and No. 5 all time. In all, 319 lots from the Bender collection changed hands in the auction.

Other highlights from the Bender collection included, but were not limited to:

Christopher J. Salmon Collection
The Garrett Specimen of the 1652 1-A Willow Tree Sixpence drew 29 bids before it sold for $312,000, leading 130 lots in the auction from the Salmon Collection. The trove is the most complete collection of Massachusetts silver ever offered from Salmon, who revolutionized how to collect and organize silver coins from the Bay State.

Other highlights from the Salmon Collection included, but were not limited to: