A Gem Proof 1913 double eagle realized $336,000 in the Stack’s Bowers Galleries August 2021 ANA Auction, setting a new record as the most valuable Proof With Motto Saint-Gaudens double eagle ever sold at auction. 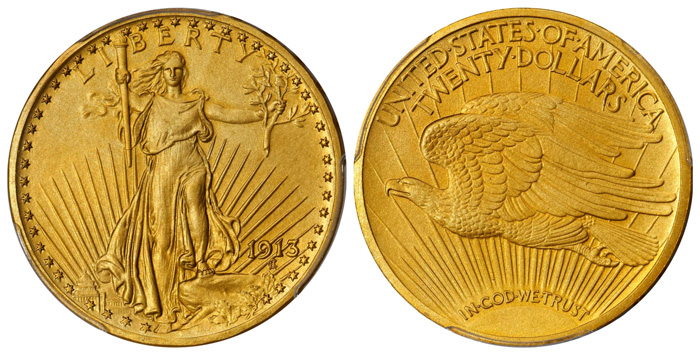 Costa Mesa, CA -- A Gem Proof 1913 double eagle realized $336,000 in the Stack’s Bowers Galleries August 2021 ANA Auction, setting a new record as the most valuable Proof With Motto Saint-Gaudens double eagle ever sold at auction. This $336,000 result more than doubles the prior record for the date and represents over three times the current Greysheet value. Graded Proof-66 (PCGS) CAC, this specimen is tied with the very finest examples seen by PCGS and NGC and represents a monumental treasure for advanced specialists.

Proof Saint-Gaudens double eagles are considered by many to be the pinnacle of 20th century U.S. Mint coinage. Struck in varying formats and finishes from 1907 through 1915, they represent a new chapter in numismatic artistry that evolved in the years leading up to World War I. The Philadelphia Mint struck 99 Proof double eagles in 1913, but just 58 coins were distributed due to declining interest in the new satin and sandblast finishes. As a result, in today’s market the 1913 is rarer than the 1907 High Relief, 1908 Motto, 1910 and 1912.

The record-setting Proof-66 (PCGS) CAC example sold in the Stack’s Bowers Galleries Official ANA Auction features warm honey-gold surfaces, full originality, and impressive technical quality. The surfaces are remarkably intricate and expertly preserved, with subtle powder blue and reddish-rose highlights enhancing the appeal of this exquisite specimen. This piece was offered as part of the Castle Pines Collection, one of the most important cabinets of United States gold coins sold in recent years. In addition to this record-setting Proof 1913 $20, the collection also featured a Gem Proof 1896 double eagle which set a record for the issue at $228,000 .

For more information on Stack's Bowers Galleries' record-setting August 2021 ANA sale or to consign your numismatic treasures to a future auction, contact the firm at 800-566-2580 or email consign@StacksBowers.com. Stack's Bowers Galleries is now accepting consignments to their November Showcase Auction through September 21, while their monthly Collector's Choice Online Auctions offer a convenient venue for the quickest sale at the strongest prices.