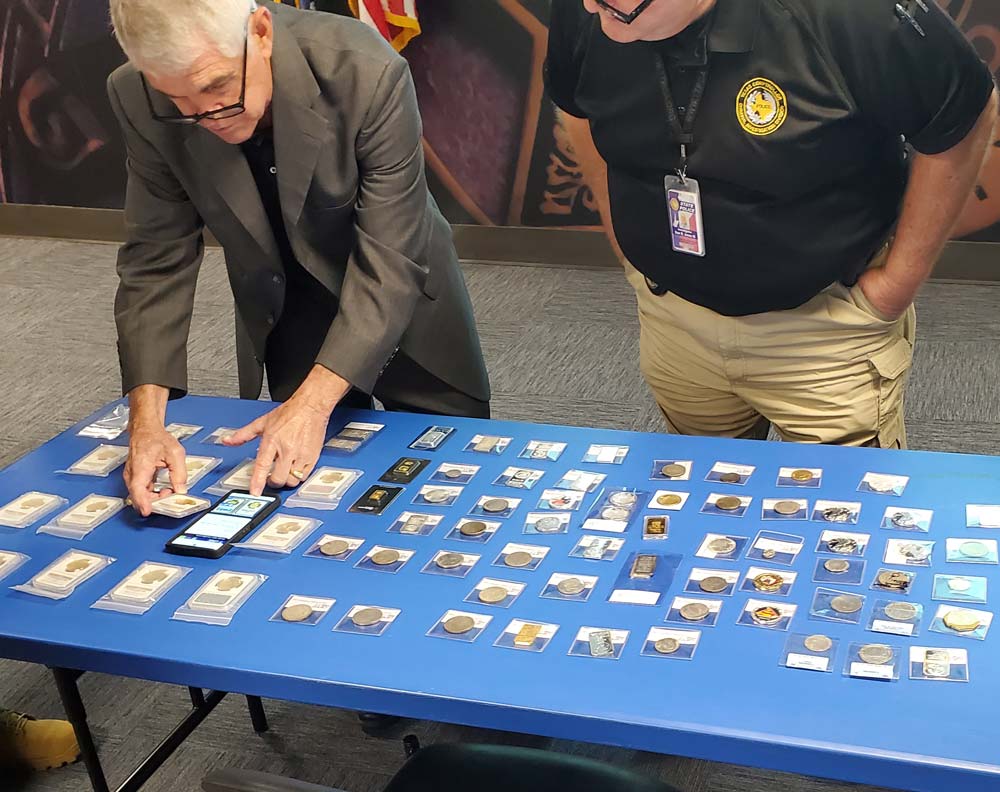 Doug Davis shown here setting up a display of counterfeits for the ACEF educational seminar.

(Leander, Texas) October 2, 2020 – The opening of the Texas Bullion Depository in the Austin suburb of Leander earlier this year has provided opportunities for investors to safely secure their precious metal coins and ingots but also raised potential problems of storing counterfeit items.

Representatives of the nonprofit Anti-Counterfeiting Educational Foundation (www.ACEFonline.org) and the United States Treasury Department Office of Inspector General (OIG) recently conducted an educational seminar at the depository for more than a dozen of the agency’s security staff and law enforcement officers from across Texas.

“The depository’s security force for the depository is composed of state-commissioned peace officers from the Texas State Comptroller’s office, the state agency responsible for oversight of the depository. Due to their lack of experience in numismatics, the Comptroller’s office reached out to ACEF for training after seeing an increase in counterfeits being shipped to the facility,” said Doug Davis, Director of the ACEF Anti-Counterfeiting Task Force.

“We provided the attendees with the basic knowledge, tools, and resources to effectively investigate numismatic crimes related to counterfeit coinage and precious metals. One highlight of the seminar was a hands-on examination of a large display of seized counterfeit coins and ingots,” explained Davis.

The Texas Bullion Depository is the first state-administered depository established in the United States and is the only public depository with its own police force. The facility in Leander, Texas opened in February 2020 with vaults capable of holding 41 million ounces of silver and 120,000 ounces of gold.

The anti-counterfeiting class held September 28 in Texas is one of many resources and strategic initiatives by ACEF in working with federal, state and local agencies to combat counterfeit coinage and precious metals within the numismatic hobby and profession as well as elsewhere in the U.S. marketplace.

For additional information or to donate, contact the Anti-Counterfeiting Educational Foundation at 28441 Rancho California Road, Suite 106, Temecula, CA 92590. The phone number is 951-587-8300. Or visit the web site at www.ACEFonline.org.