The Business of Numismatics: August 2022 Greysheet 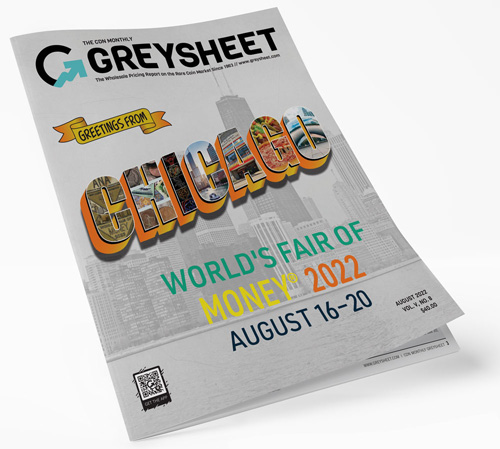 I write this issue’s column as the Summer FUN Convention is taking place. While I am not in attendance, the handful of reports I have heard so far are that the show is more active than the Long Beach Expo held the prior week. The question on most dealer’s minds seems to be what the direction the market is going to be for the next five to six months. It is becoming clear that the potential bottleneck for the free flow of product, on the wholesale side, is going to be how easily, or not, dealers adjust their pricing to current levels. Those who cannot, or are unwilling to, mark their prices to market will find that their sales will suffer.

A great aspect of the conclusion of the month of June, as the halfway point of the year, is that it provides ample market data. Year to date (June 30th) the S&P 500 was down 20.58%, while the one-year return of the index was minus 11.92%. The index was down 21.08% off its all-time high, which was set on January 3rd of this year. Worldwide, the S&P Global BMI was down 21.33% year-to-date. I give these statistics as a frame to the primary topic I wanted to address this month. Lately, I have still seen numerous writings and articles claiming that rare coins are a so-called 'inflation hedge'. I am neither old enough nor well-read enough to know the first publication that promoted rare coins as such, but this statement is no longer valid. As I alluded to in my July Greensheet column, numismatic items are not an inflation hedge. Rather, they should be viewed as alternative assets.

Simply put, monetary policy. The changing mechanisms of money creation, lending rates, and leverage are the primary reasons all assets have increased significantly in value over the past 20 years. The same (generally speaking) high net-worth individuals who own significant equity assets are the same ones who buy and bid against each other for rare coins.

The reason why traditional equity markets have fallen so much recently is not because of inflation, but due to asset deleveraging. This is most notable in cryptocurrency which was primarily caused by the Federal Reserve decision to raise the benchmark interest rate 75 basis points, the largest such increase since 1994. It is expected that there will be two more 75 basis point hikes, on July 27th and September 21st. If the Federal Reserve holds fast, inflation will be reined in and the deleveraging will continue. But if the Fed acquiesces to market pressures, as in the past, more problems will be created.

Like many other asset classes, the rare coin market has enjoyed a marvelous bull market the past two years, however most intelligent market observers agree that demand is slowing, mainly because prices got to the level—in market terms—of being overbought. Inflation, defined as the increasing price of common goods, is exactly the thing that is putting the brakes on the rare coin market. If rare coins were a hedge, wouldn’t the market increase in such a time? 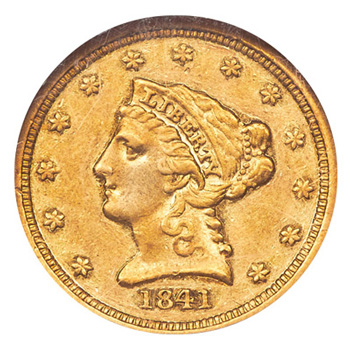 WHAT IS AN “INFLATION HEDGE”?

I contend that the only true inflation hedge is gold bullion in the form of bars or bullion products that have zero numismatic premium or value. Gold bullion is infinitely liquid, transportable, and fungible. If absolutely necessary, gold bullion can be sold for Swiss francs, Emirati dirhams, Qatari riyals, or any other currency that is not depreciating as quickly as the U.S. dollar. Despite this, the gold spot price, as measured in U.S. dollars, has taken a pounding recently (early July), because the dollar maintains its strength against many other currencies that are rapidly weakening.

In summary, rare coins should be viewed as an asset, part of an overall broadly balanced, investment portfolio. Viewing a collectible as an “inflation hedge” is fraught because the primary driver of its value is an increase of the money supply, which is essentially the definition of inflation. The appeal of rare coins, and their long-term value, should be the idea that there is a long-established buyer base and extensive pricing history that has proven to weather various monetary and financial storms. During these turbulent financial times, the asset class of rare coins have held up remarkably well but this resilience may well be tested over the coming months. Only time will tell.

Subscribe to August 2022 edition of Monthly Greysheet for the industry's most respected pricing and to read more articles just like this.