While long dismissed by many collectors and coin dealers, the final two issues of the Classic Silver Commemorative series provide an interesting study in condition rarity and valuation relative to that rarity. 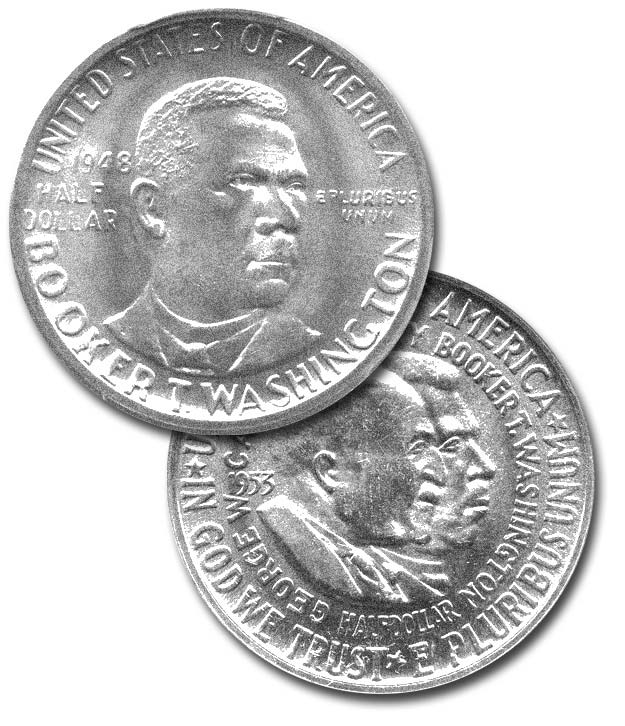 While long dismissed by many collectors and coin dealers, the final two issues of the Classic Silver Commemorative series provide an interesting study in condition rarity and valuation relative to that rarity. The Booker T. Washington and Washington/Carver Half Dollars were both struck in multiple years and at all three Mints operating at the time of issue. Their reputation going back to when they were first released to the collecting community belies the desirability these pieces have at the Superb Gem grade level, MS67, and above. But first a little background for those who may not know the full story behind these sometimes maligned issues.

The Booker T. Washington (BTW) Commemorative Half Dollar was authorized by Congress on August 7th, 1946, and stipulated that a maximum of 5 million coins could be struck at all three United States Mints for up to five years after the passage of the authorization. The coins were to be distributed by the Booker T. Washington Birthplace Memorial Commission, with the proceeds of the sales to fund the building of said Memorial at Washington’s birthplace in Virginia. The obverse and reverse of the coin was designed by Isaac Scott Hathaway, a black artist, and in December of 1946 the first pieces were struck in Philadelphia to the tune of 1 million coins. The Denver Mint struck 200,000 and San Francisco struck 500,000 (note mintage figures do not include coins struck for assay purposes). The January 1947 cost of the initial PDS Set was $3.80, including shipping. In the 1947 the three Mints produced 100,000 coins each, and the PDS Set was offered for $6. As sales lagged to an uninterested public, the three Mints struck 20,000 coins each in 1948, the PDS Set selling for $7.50 on release. Each Mint struck 12,000 coins in 1949, and the PDS Set issue price continued to increase, this year at $8.50. The year 1950 saw the Philadelphia and Denver Mint strike 12,000 coins each, but San Francisco a massive 512,000, in an effort by the Memorial Commission to boost sales. The 1950 PDS Sets were released at $8.50. In the final year, 1951, Denver and San Francisco produced 12,000 pieces but, similar to the previous year, the Philadelphia Mint struck 510,000 coins, and this year’s PDS Set was also sold at $8.50. When it was all said and done, hundreds of thousands of the BTW Half Dollar went unsold, and 1,581,631 coins were melted, and many more, primarily the 1946 Philadelphia issue, were spent for face value. The Birthplace Memorial Commission was broke, and the state of Virginia had to subsidize the purchase and building of the Memorial.

In an unfortunate repeat of history, the same individual behind the BTW coin, Dr. S.J. Phillips, was able to get Congressional approval on September 21st, 1951, for another Commemorative, despite his failures the first time around. The Carver-Washington Coin Commission was established to distribute a new coin depicting Dr. George Washington Carver and Booker T. Washington, with the profits of the sales going to “oppose the spread of Communism among African-Americans in the interest of the national defense.” Ironically, many of these coins were struck from the silver of the melted-down BTW Halves (only to be melted again!) The much-derided design was executed also by Isaac Scott Hathaway, and included a yet-to-be invented word, “Americanism.” This series’ initial year was not as ambitious as the BTW, for in 1951 there were 110,000 coins struck at Philadelphia and 10,000 at the other two branch Mints. The official sale price was $10, and this price remained for all four years. This was not the case in 1952, however, as Philadelphia struck 2,006,000 pieces, while Denver and San Francisco struck 8,000 each. The year 1953 saw the lowest overall mintage, with Philly and Denver producing 8,000 coins apiece and San Francisco 108,000. In the final year of 1954, Philadelphia and Denver struck 12,000 pieces each and San Francisco 122,000. Abysmal sales of the PDS Sets led to 1,091,198 W/C Halves being melted by the Mint, and as is the case with so many bureaucratic projects, the intended recipients benefited very little.

Both the BTW and W/C Half Dollar were made carelessly and endured poor handling prior to leaving the Mint. The BTW is often weakly struck and poorly defined, especially on Washington’s hair and right (facing) cheek. Many specimens will also exhibit many bagmarks and nicks on the forehead and cheek, along with friction on the high points. For a BTW to grade MS66 or higher, it must have none or very few ticks or bagmarks on the profile of Washington and the hair should show strong definition. The W/C Half was produced even worse than the BTW. Its overall flat design resulted in weak strikes and many bagmarks, especially on Carver’s jaw line and upper cheek. The map on the reverse is often poorly defined, and there is often much friction on the letters “U.S.A.” Superb Gem W/C Halves will have minimal bagmarks, and the definition of the conjoined busts will be strong, especially Booker T. Washington’s hair and forehead, behind Carver. Eye appeal and attractive toning is also important and can move up coins that are of the same technical grade. Care should be taken to inspect whether friction and bagmarks are “hiding” underneath toning.

Looking at the combined population data from NGC and PCGS, one can get an overall picture of the scarcity of these coins above the Gem grade level. Of course, the grading services report grading events, and in many cases cannot account for the re-submission of the same coin multiple times. At the time of writing, there have been a combined 11,854 BTW Halves graded MS66 through MS69, while for the W/C there have been 2,896 graded, roughly 4 times fewer. Of course the bulk of these are MS66 coins. The numbers get more acute in MS67, where there have been 1,336 certified BTW’s and just 163 W/C’s. The scarcest BTW in MS67 are both Philly Mint coins, 1947 and 1948, which are tied with 19 coins apiece; the most plentiful date is the 1946-S which shows 193 thus far graded. There are two dates of W/C Halves which boast a single MS67: 1952-D and 1954-D; the largest population is the 1952, at 48. The chart below details the populations for the MS66 and MS67 grades by date.

The presence of a green sticker on a third party holder from Certified Acceptance Corporation, commonly known as CAC, is very influential on the price of many Classic Silver Commems, and these issues are no exception. To date, a total of 2,133 Booker T. Washington Halves (across all grades) have received a CAC sticker, and 941 total Washington/Carver Halves have been approved. Interestingly, for both Types, MS66 graded coins make up about half of the total number. This could be due to the fact there is little upside for Gem level (or lower) coins to be submitted to CAC, and submissions of higher grade coins are less frequent. Looking strictly at MS67 coins, 436 BTW’s have been awarded a green sticker, about 20% of the total, and the number is just 50 for the W/C, a scant 5% of the total stickered. How do CAC stickered coins compare to the combined certified populations of these Commems overall? For coins at the MS66 and MS67 grade level exclusively, it can be observed that 13.4%, or 1,592 out of 11,798 BTW’s were stickered by CAC, and 17.8% or 517 out of 2,892 W/C’s were stickered. It would be interesting to see how these percentages compare to other United States coin series. Additionally, there have been 2 MS66 graded BTW’s to get a CAC Gold sticker. One of these Gold CAC pieces, a 1946-D in a PCGS holder, sold in the Stack’s Bowers March 2014 Baltimore sale, bringing $1,645. There has been one MS66 Washington-Carver, a 1952, to receive the CAC Gold sticker.

There are only four MS68 Washington-Carver Halves thus far graded at PCGS and NGC. Three of them are certified by NGC: a 1951-D, a 1952, and a 1952-S. The 51-D and 52 both have the Star designation from NGC. The singular MS68 from PCGS is a 1952. Somewhat surprisingly, none of the four MS68 W/C’s have been stickered by CAC. None of the four coins have appeared on the market in recent time, so any estimated price is speculation. It is observed that a 1953-S graded PCGS MS67+/CAC brought home $20,563 in the Stack’s Bowers 2014 Americana sale. Zero Washington-Carver Halves have ever been certified MS69. Perhaps there is one out there, lurking in an old-time collection. Fortunate is the person who finds this coin, if it exists, as it would surely be newsworthy.

Collectors putting together a 50 coin type set of Silver Commems only need one each of the 18 different dates of the BTW and the 12 different dates of the W/C, so the selection comes down to grade and eye appeal. Although these two issues are probably the most overlooked when putting together such a set, the discerning collector should take the time to select a sharply struck, colorfully toned specimen graded MS66 or better. In that, he or she is acquiring a coin that is mostly likely a value relative to its overall scarcity.