The Meaning of An Irrevocable Bidder 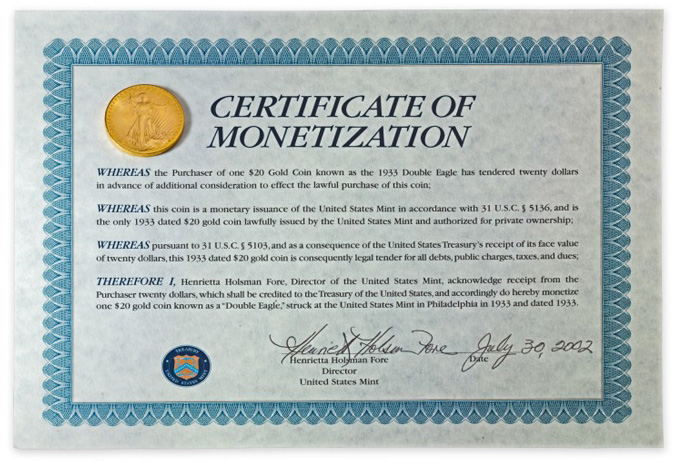 The U.S. Mint Certificate of Monetization for 1933 Saint Gaudens

The U.S. Mint Certificate of Monetization for 1933 Saint Gaudens

In the online catalogue, there were symbols above the lot description for this 1933 double eagle indicating that it was both “Guaranteed Property” and subject to “Irrevocable Bids.” For a lot to be guaranteed property, Sotheby’s or a third party or some combination of Sotheby’s and a third party agree in advance of the auction to bid the consignor’s reserve or an amount above the consignor’s reserve. The term “Guaranteed Property” means that the indicated lot will definitely sell in the respective auction.

If the guarantor is a third party, he is paid a fixed fee to bid a certain amount, presumably at or modestly higher than the reserve. His compensation for being a guarantor is thus fixed regardless of the outcome of the auction.

If the symbol for irrevocable bids above the lot description for the 1933 double eagle is clicked, a popup box appears with a definition that is far more narrow than the definition of an irrevocable bidder in the Conditions of Sale section of the same online catalogue. I am citing the broader definition here, which I find to be ambiguous. The following part is especially relevant to the sale of the Fenton-Weitzman 1933 double eagle.

If the irrevocable bidder is a dealer or a speculator, then he is incurring risk. No one can come close to perfectly estimating market levels for very rare or otherwise especially distinctive items.