The Most Valuable Common Coins are CAC Saint-Gaudens Double Eagles 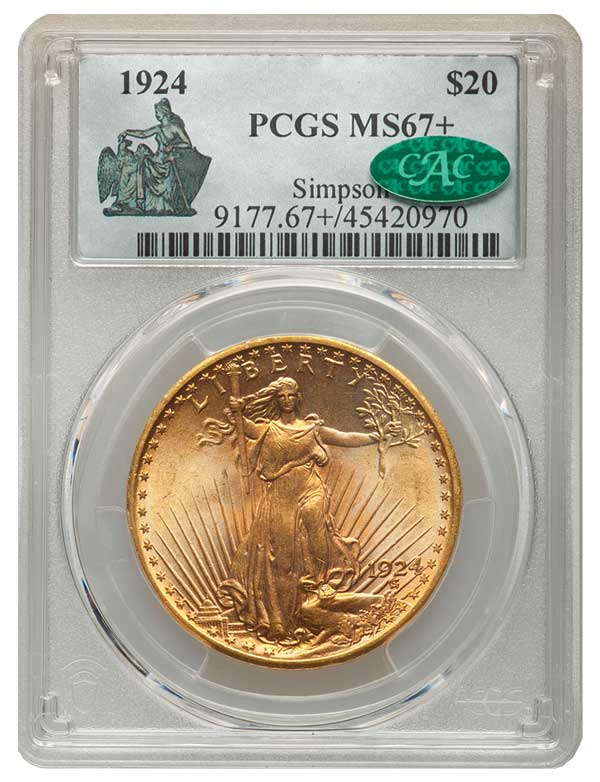 The term “Generic Saints” refers to very common Saint-Gaudens double eagles (U.S. $20 gold coins). The most common generic Saints are the 1908 No Motto, the 1924, the 1927 and the 1928. Though not quite as common, the 1923-D and the 1925 are generics, too. Generic Saints that are CAC approved as grading in the MS67 range have dramatically risen in value since 2020 and have reached mind boggling levels.

Two generic Saints in the Simpson Collection brought tremendous prices at auction on August 22, 2022. Before focusing on these two, there is a need to provide background information regarding generic Saints.

CAC approved Saints in the MS67 grade range are condition rarities. In the MS67 range, CAC reports twenty 1908 No Motto Saints, eleven 1923-D Saints, thirty 1924s, two 1925s, four 1927s and twenty-six 1928 Saints. Also, there are a few CAC approved MS67 grade better date Saints, including absolute rarities, though those constitute a whole different topic. A condition rarity of a very common coin is something much different from a coin that is rare in all grades.

The generic Saints that are PCGS or NGC certified as MS67+ and CAC approved as MS67 have, in several instances, brought many multiples of the values of corresponding coins that were PCGS or NGC certified as grading in the MS66 range or as MS67 without a plus. The current CPG®-CAC medium retail estimate for a CAC approved MS67 generic Saint, presumably for coins without plus grades from PCGS or NGC, is $41,400. which is beyond eleven times the already mentioned CPG®-CAC retail price estimate for a MS65 grade generic Saint, $3,620.

To a significant extent, the market for CAC approved MS67 generic Saints has separated itself from the market for non-CAC PCGS or NGC graded MS67 generic Saints, which have been volatile during 2021 and so far in 2022. Values of non-CAC PCGS or NGC graded MS67 Saints seem somewhat tied to markets for MS66 and MS65 grade Saints, which are often traded as commodities rather than as individual coins for collectors. For the most part, CAC approved MS67 Saints are demanded by different buyers. I know a few of the buyers.

As the just mentioned point is a little complicated, it should be restated in a different way to be clearer. In many cases, CAC has placed a CAC green sticker on a PCGS or NGC holder of a coin with a plus grade even though experts at CAC do not or would not agree with the plus grade. While deciding whether the precise grade of a coin is at least in the middle of a whole number grade range, experts at CAC do not pay attention to whether the respective coin was assigned a plus grade by PCGS or NGC. Nonetheless, the combination of a PCGS plus grade and a CAC sticker has much market value in regard to PCGS graded MS67+ generic Saints.

As far as I know, the previous auction record for a 1924 Saint was the $63,250 result for a PCGS graded MS68 1924 Saint that was auctioned by Heritage on January 6, 2006. That coin could not then have had a CAC sticker since CAC was founded in 2007. Besides, CAC has not approved any business strike Saints in MS68.

On May 5, 2022, Heritage auctioned a PCGS graded MS67+ 1924 Saint, without a CAC sticker for $45,600. In my view, this was not a good value. At a glance, this coin is apparently superb. Upon close inspection, however, I found blue and orange textures that I really did not like, and imperfections under these textures. This is my opinion. Evidently, there are grading professionals at PCGS who found this 1924 Saint to be a superb coin. Multiple experienced coin professionals may scrutinize the same coin and draw very different conclusions. Should a collector spend a lot of money for a common coin largely because it is highly certified?

As for the Simpson Collection PCGS graded 67+ 1924, no pedigree or prior auction history is listed in the Heritage catalogue. There are some noticeable contact marks on the obverse in prime focal areas. Is it a realistic possibility that experts at CAC found the grade of this coin to be in the middle of the MS67 range rather than in the high end?

I very much like the neat cartwheel luster and wonderful originality of the Simpson Collection 1924. I just do not perceive it as superior to most other CAC approved MS67 grade Saints, with or without plus assignments from PCGS or NGC. The Simpson 1924 is, however, very much superior to the already mentioned non-CAC, PCGS graded MS67+ 1924 that realized $45,600 on May 5.

In my opinion, there are compelling reasons for the Simpson 1924 Saint to be worth around twice as much as that non-CAC PCGS graded MS67+ 1924 Saint, which was auctioned in May. It does not follow, logically, that either coin should be worth so much more than a MS66 or MS65 grade 1924 Saint.

The Simpson 1928 drew much more attention than the Simpson 1924 Saint. The thick orange toning on the obverse is unforgettable. This 1928 Saint was earlier in the collection of Dr. Steven Duckor, a living legend. In past articles, I covered the offerings of his collections and chronicled Dr. Duckor’s collecting journey. In January 2012, Heritage auctioned Dr. Duckor’s set of Saints, except his former 1927-D, which was auctioned much earlier, by the firm of David Akers in 1998.

Unquestionably, the Duckor-Simpson 1928 is an exceptionally entertaining coin. The fields are blonde with green tints. The orange colors in the centers really command attention. On August 22, the $204,000 result was certainly one of the strongest prices in the whole Heritage auction extravaganza. I was figuring that a medium retail price would have been around $140,000.

Regarding the $204,000 result for this 1928 and the $90,000 result for the Simpson 1924, were these two auction records foreshadowed by auction results for the Rollo Fox 1923-D and for the Kutasi-Duckor 1925? As I reported in an issue of The Monthly Greysheet (https://tinyurl.com/RolloSaints), Rollo Fox’s set of Saints was auctioned by Heritage on January 9, 2020. Like the Simpson 1924 and the Duckor-Simpson 1928, the Fox 1923-D was PCGS graded MS67+ with a CAC sticker. In my personal opinion, Rollo’s 1923-D is of higher quality than either of the two Simpson coins. It is simply amazing.