Thinking Outside The Slab

In today's world of sonically sealed plastic, it’s hard for some to imagine that a great many of the big-ticket trades going down between dealers still involve "raw" coins. Yet, in reality, most coin dealers trade high volumes of unslabbed coins in both wholesale and retail transactions. 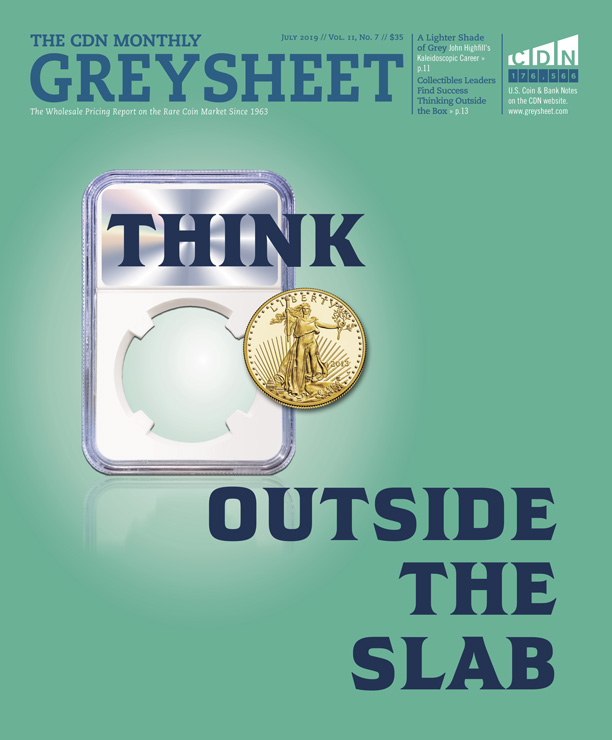 Thinking Outside The Slab

This article appeared as the feature story in the July 2019 Monthly Greysheet.

In today’s world of sonically sealed plastic, it’s hard for some to imagine that a great many of the big-ticket trades going down between dealers still involve “raw” coins. Yet, in reality, most coin dealers trade high volumes of unslabbed coins in both wholesale and retail transactions. In some cases, the individual raw coins being traded simply aren’t worth paying premiums for certification. In other situations, dealers are handling raw coins because they come from older collections originating from before the rise of TPGs in the mid 1980s.

In most instances, the raw coins trading hands today are relatively low-value pieces. These include Indian and Lincoln cents, heavily circulated 19th- or early 20th-century type coins like common-date Liberty Seated and Barber coins, common-date pre-1933 gold coins, pre-1965 silver coinage, and run-of-the-mill modern uncirculated and proof singles. In terms of overall volume and number of units handled, these coins and others like them collectively represent the vast majority of marketplace trades.

But what about the rest of the market, such as early Federal-era coins like Flowing Hair and Bust coins, early American copper, high-end Seated and Barber coinage, and supergrade moderns? Are raw examples of these coins active in the marketplace? And, if so, what advantages might they represent to the typical dealer?

Indeed, many coin dealers think outside the slab. This is so more than three decades after the introduction of PCGS and NGC in 1986 and 1987, respectively, changed the landscape of the marketplace forever. Even in an era when the crackout game has dealers breaking high-quality pieces out of their slabs and resubmitting the coins with hopes of achieving higher grades on the labels, some market makers are opting to buy the coin, not the slab.

Among these dealers is one who wishes to maintain his anonymity in discussing this touchy topic. This longtime numismatic professional, a reputable market maker who we will refer to here as “Frederick Johnson,” operates a successful business in which a major segment of the material he handles is raw. “I am feeding internet retailers and program sellers with cheaper material, such as 1865 Indians in Good, VF-AU Stone Mountain halves, Columbian Halves, most type coins in Good to Fine, many Morgan and Peace dollars in VF and XF, Buffalo nickels for year sets, and the like.” Conversely, he says pieces that have “become very common” are weaker in the raw state. According to Johnson, these include AG Barbers; Lincoln wheat cents in lower grades (except for the keys); and Bust half dimes, dimes, and quarters in most grades.

“The more expensive the coin, the more the need for coins to be certified, with the exception of those that have a ‘but’ description, like ‘Cleaned,’ ‘Scratched,’ etc. The relatively inexpensive coins are not worth the cost of certification, and when they are, they’re quite often cracked out and made raw again.” Additionally, he says there are many advantages to dealing in raw coins, especially when these pieces are on the lower end of the cost spectrum.

“In cheaper coins, you are talking quantity, and raw coins take up a lot less space than slabs.” Though, he further adds an important caveat for those who deal in raw coins. “It also takes a bit more knowledge, like how to accurately grade the coin for your customer market. There are many so-called dealers who couldn’t grade a coin accurately if they had to.”

So, what does a dealer need to do to build skill in handling raw coins masterfully, especially when dealing with high-priced rarities? Is it just a matter of time and experience? Asking questions? Learning from other experts? Something else? “All of the above,” replies Johnson. “We have all taken educational losses on coins and will continue to do so. With time and experience, you try to maximize the ‘oh, boys’ and minimize the ‘aww, $#!+s!'”  He also says looking at what other dealers are selling—and not selling—is also helpful. “You can ask all the questions you like, but the ultimate education is physically buying and selling.”

For Tom Caldwell of Northeast Numismatics in the Greater Boston Area, if a coin above a certain price point is raw, then “there’s a reason.” He clarifies, “Meaning that they most likely have issues such as cleaning, damage, corrosion, or some other impairment and, in extreme cases, authenticity may be questionable.”

Caldwell asserts that in today’s market it is difficult finding a dealer who is offering fresh material that hasn’t already been through one or two TPGs. He says this poses an especially major risk to what he calls the “new-school” dealers who he believes don’t necessarily have the experience to authenticate key-date coins and may be overly dependent on the grading firms. “Without having learned some of the basic skills and without having some of the knowledge on how to tell an authentic coin from a counterfeit ends up having an effect on their buying and grading skills.” He adds handling many raw coins as well as trial and error are important ways for any dealer, novice or seasoned, to build a better knowledge in deciphering the problem pieces from the problem-free.

“But, the only real grades that matter in today’s market are what the grading services say, so by buying material and sending it to the major grading firms, you will get a feel for how coins grade in today’s market. Of course, also ask questions from trusted experts, attend shows and club meetings, look at auction catalogs, and look online at major dealer websites with material for sale—the more you can view from multiple venues, the better your skills will get,” he advises.

“Ultimately, there is likely a reason why ‘X’ coin is not certified. This is also the case with most auction firms, be they small or large. With the exception of bullion-related and lesser-expensive material, the problem is that most coins on the market being sold raw have issues, and when it comes time to resell you will likely be in for a rude awakening,” he says. “You will find that all too many coins sold as ‘X’ grade are cleaned, damaged, scratched, or in worst-case scenarios counterfeit.”

So, does that mean a rare piece coming across the case in a flip or 2X2 should automatically raise big red flags? “We are decades past everyone knowing that to sell coins of any kind of value, perhaps with the exception of bullion-related material, to get the most money you need to get them certified.” If that’s the case, then it would stand to reason that pricey raw coins are possibly harder to sell at their full price. But Caldwell says at the end of the day, raw coins should be able to stand on their own merits. “They are worth what they’re worth. There will normally be a good reason for any coin selling for a bargain price.” Aiming a salient aside to the retail customer, “you are likely to only get what you pay for at best, so don’t try to outsmart the professional. You could be buying ‘X’ coin that was formerly a no-grade at a grading service or one that the dealer knows does not have a shot of getting into a holder,” he says. “But, seriously, for the collector who is not concerned with having some protections against buying problem coins, buying raw is the way to go.”

He says that despite the huge popularity of slabbed coins these days, raw coins actually do still have a strong position in the marketplace and are especially popular among collectors who are “old school” and are working on filling albums and folders. “The sale of coin supplies, albums, folders, individual coin holders, and the like remain robust. Most local shows and any of the major shows have a supply dealer setup selling these, so that says something right there, that the activity and interest in raw coins is out there.”

Matt Draiss of Olde Saratoga Coin in Colonie, New York, agrees with Caldwell on that point. “There are a number of collectors who still hate ‘plastic.’ These would be your Early American Coppers and Bust Half Nut people,” he quips. “So, dealing in raw coins still has streamlined perks.”

Draiss says raw coins are “extraordinarily” undervalued—at least those that are truly without evident flaws. “When you look at the actual population of problem-free raw coins, whether a common AU Morgan dollar or a rare-date Lincoln cent, there simply isn’t enough product to go around. Junk sells at a discount, but dealers have been wanting to buy decent material for just a bit higher; there should be an easy spread between junk and problem-free.”

The potential problems in selling these nicer scarce dates is that many customers perceive slabbed coins as the safer buy. “I believe raw coins don’t sell nearly as fluidly as slabbed early vintage among the public due to scares of counterfeits, doctoring, overgrading from dealers, and so on.” The 23-year-old dealer admits this era of slabbed coins proliferating the marketplace is even making it more difficult for younger dealers like himself to get a firm grasp as to properly evaluating uncertified coinage.

“The new generation of coin dealers, myself included, is absolutely losing some of the touch to grading and authenticating raw coins.” To this, he says handling the same material over and over again and finding a mentoring dealer is the key. “‘He who learns, earns,’ as a friend of mine so eloquently put it. A real coin dealer will show you how to grade and trade raw coins.”