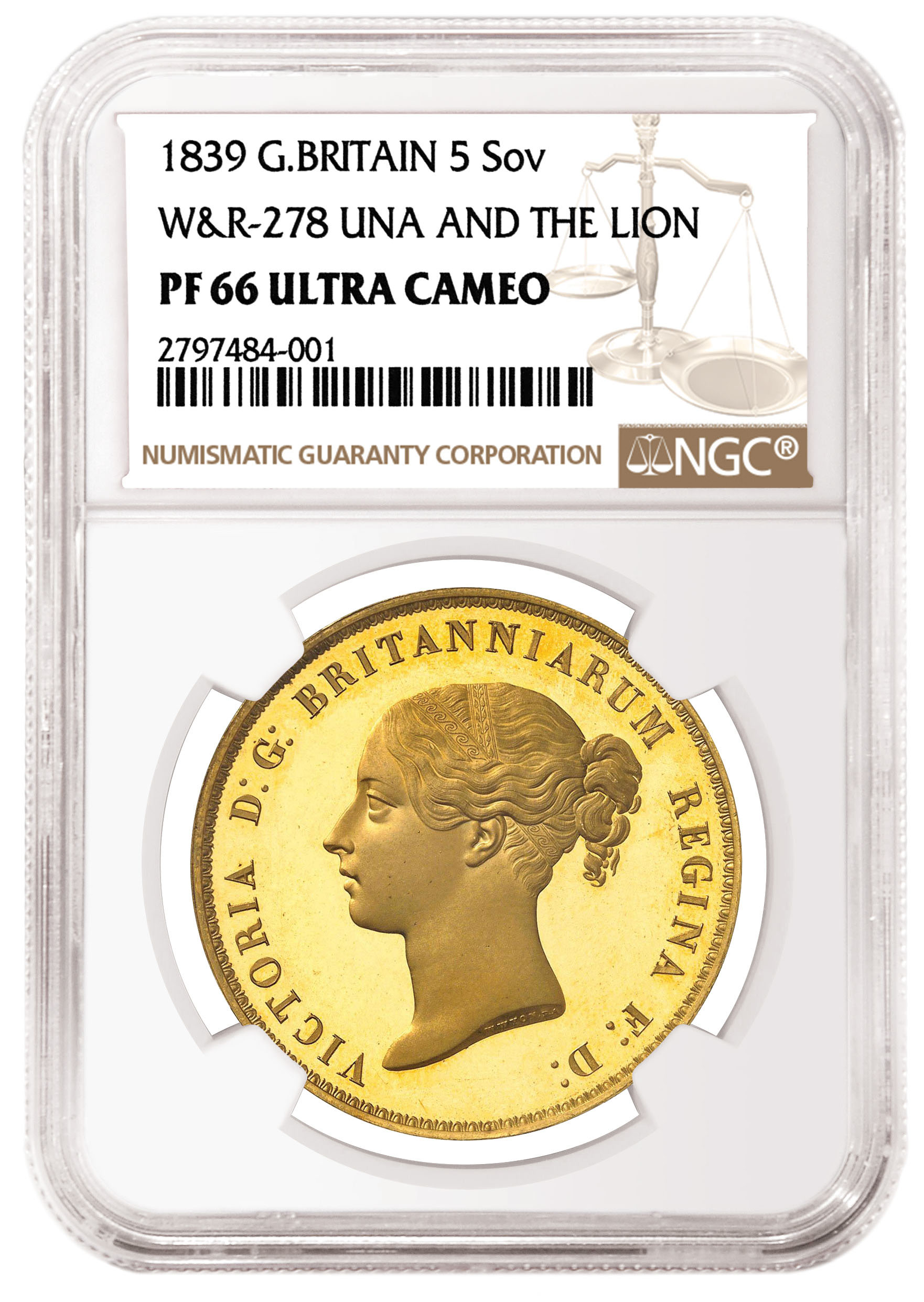 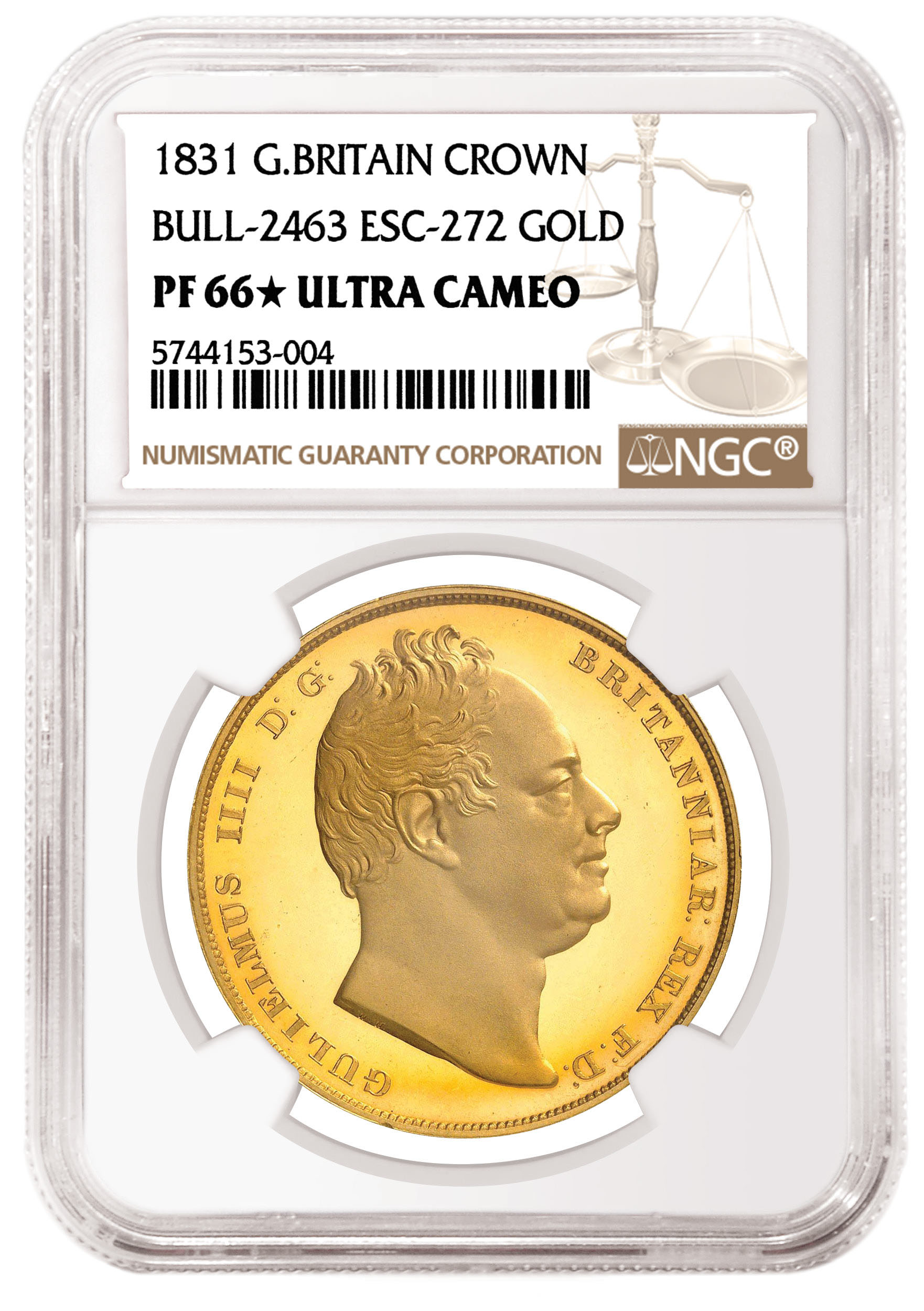 Widely regarded as the most beautiful British coin, the design celebrates Victoria, who had just become Queen of England in 1837 at the age of 18. The coin's obverse features a bust of the young queen, framed by the legend VICTORIA D: G: BRITANNIARUM REGINA F: D:, which is Latin for “Victoria by the Grace of God, Queen of the British territories, Defender of the Faith.”

The more famous reverse also features Victoria, this time as Lady Una, a character from Edmund Spenser’s 1590 poem "The Faerie Queene." She is pictured guiding a lion (a symbol of England). The fabled scene is surrounded by the Latin motto DIRIGE DEUS GRESSUS MEOS, which translates to “May the Lord direct my steps.”

The 1831 Gold Crown is extremely rare, and this example is by far the finest known. NGC recognized its incredible eye appeal by assigning its trademark Star (★) Designation as part of the coin's grade.

"This MDC Monaco sale brought British numismatics to new heights, and it's no surprise to see NGC-certified coins leading the way," said Mark Salzberg, NGC Chairman and Grading Finalizer. "The expertise of NGC's world grading team is unrivaled, and NGC is proud to serve collectors in Europe with offices in the United Kingdom and Germany."

An 1817 Gold Pattern Crown graded NGC PF 65 Ultra Cameo realized € 576,000 (about $672,000 USD). Only seven of these coins were struck in gold. The bust of George III, whose 59-year reign was the longest of any British king, is the work of engraver William Wyon, best known for his venerated "Una and the Lion" design over two decades later.

Wyon's 1817 reverse for the Crown was considered for Britain's new Sovereign coin; however, it lost to Benedetto Pistrucci's timeless Saint George and the Dragon design, which is still in use today.

A British coin struck in Bombay (today known as Mumbai) also generated lively bidding. The coin, a Great Britain 1896B Gold Trade Dollar graded NGC PF 64 , realized € 456,000 (about $532,000 USD). It is one of the few known of any year struck in gold and is possibly unique for its particular year.

Silver British Trade Dollars were minted starting in 1895 to facilitate commerce in the British colonies of Hong Kong and the Straits Settlements (which included modern-day Singapore). As a result, their reverse contains Chinese characters and Malay script.

"We are delighted with the record-setting performance of NGC-certified coins in this sale," said Nicolas Gimbert, MDC Monaco Numismatic Expert. "NGC certification helps bidders feel more confident, which is especially important when an ultra-rare coin represents a once-in-a-lifetime opportunity."

In all, an astounding 24 NGC-certified coins realized at least $100,000 USD, including:

All prices realized include buyer's premium.