War and Inflation Has Not Propelled MS65 Saints

The featured article of the May 2022 Monthly Greysheet is an analysis of the recent performance of Gem-graded common date Saint-Gaudens double eagles.

THE SAME KINDS of arguments that are often employed to define gold bullion as an investment are often used in conjunction with very common, gem quality Saint-Gaudens double eagles (U.S. $20 gold coins), generic Saints! It is frequently said that they are hedges against inflation or that their value will go up in the event of major crises, especially wars. Are the values of MS65 grade Saints tied to gold bullion? To what extent did MS65 grade Saints and gold bullion rise in value during the current period of inflation and war?

Indeed, the increase in the inflation rate in the U.S. from June 2021 to March 2022 and the invasion of the Ukraine by Russia late in February are prime examples of the kinds of phenomena that have traditionally been thought of as propellants for price increases in gold bullion and widely recognized gold coins. I am here referring to common date PCGS and NGC graded MS65 Saint-Gaudens double eagles, especially those dated 1924, the most common date.

For dates that fell on weekends or were holidays, the daily closing gold bullion value of a nearby date is used in my references. The data cited here are intended to provide an idea of trends in gold bullion and in the recent values of PCGS and NGC graded MS65 Saints; my data listings are not intended to be taken too literally or to be treated as firmly scientific in nature. There can be estimates and rounded numbers. Nonetheless, the data are illuminating and may cast doubt on common preconceived notions about gold bullion and generic gold coins.

Ever since I was a little kid, I have been hearing and reading that classic U.S. gold coins, including U.S. generics, and gold bullion are hedges against inflation and provide financial protection during times of crises, especially wars. In recent decades, such concepts have not been subject to much real-world testing.

Since 1983, there has been very little inflation in the U.S., according to official government statistics. The recent annual or yearly rates of six to eight percent are far greater than any U.S. dollar inflation rates during the last thirty-five years. During this time, there has been minimal warfare in Europe. The armed conflicts relating to the former Yugoslavia during the 1990s were contained. Those mini-wars did not have much of an effect on the major powers and wealthier nations of Europe.

While attacks by Russian military forces in Georgia in 2008 are noteworthy and pertinent to the current conflict, they were not nearly of the same scale or as ambitious as the Russian invasion of the Ukraine in 2022. After the United States, the Russian military has the most powerful nuclear weapons and the most sophisticated military technology in the world. Additionally, Russia has more than one million active military personnel and possibly two million reserves. In other words, in terms of military might, Russia is or was generally thought to be number two in the world, behind the United States. The invasion of the Ukraine in late February with more than 150,000 troops and hundreds of tanks was the most shocking and severe military event in Europe since World War II.

Vladimir Putin, the president (really the king) of Russia, threatened NATO nations and explicitly talked of nuclear war during the days that followed this invasion. While it is likely that Putin was bluffing and using flowery language to scare the U.S. and other NATO nations, Putin sought to discourage Western military support for the Ukraine while the Russian invasion was in progress.

Clearly, international tensions were dramatically heightened. The probability of a large war in Europe or even World War III, though still small, was higher than it had been since the 1980s, perhaps higher than at any time since the Cuban Missile Crisis in 1962. Has the Russian invasion of the Ukraine led to the kind of situation that many gold bugs claim should cause massive increases in the value of gold bullion and of popular gold coins?

On Feb. 17, 2022, U.S. Secretary of State Blinken stated that initial actions pertaining to the invasion of the Ukraine were “unfolding.” The next day, President Biden declared that he was “convinced” that Russia would soon attack the Ukraine. On Feb. 23, it was evident that the Russian invasion had really begun. Before the Russian invasion, inflation in the U.S. was already very substantial.

By December 2021, it was apparent that inflation in the U.S. was raging at a level not experienced since the early 1980s. From May to September 2021, the yearly rate was above 5% each month and the rate was above 6% in October and in November.

Inflation in 2021 did not seem to bring about a rise in value in either gold bullion or MS65 grade Saints. Did the invasion of the Ukraine have more of an effect?

On January 20, 2022, long before most players seriously thought that Russia would really invade the Ukraine, Greysheet Bid for MS65 Saints was reduced to $2,270. By March 1, the invasion was a reality and the circumstances were horrifying. Moreover, the U.S. yearly or annual inflation rate in January was 7.5% and 7.9% in February 2022. The general belief was and still is that supply shortages attributed to this war and sanctions will contribute to even higher inflation rates than would otherwise prevail. Yet, on March 1, Greysheet Bid for MS65 Saints was $2,310, an increase of zero percent over Greysheet Bid on January 1, 2022, and a decline of about 1% from Greysheet Bid one year earlier, on March 1, 2021, $2,330.

Bullion fared better in a financial sense. On March 1, 2022, gold was worth about $1,922 an ounce, 10.8% above its value one year earlier. Even so, given the dramatic increase in inflation and an alarming war that was not, on March 1, appearing very favorable for the Ukraine, an annual increase of less than 11% in the price of gold is almost trivial.

Therefore, during 2021 and the first three months of 2022, there has been minimal evidence that gold bullion or MS65 Saints were substantially affected by U.S. inflation or the war in the Ukraine. It could be fairly argued that they were not affected at all, as fluctuations during normal times in the 5% to 15% range are not unusual for either gold bullion or MS65 Saints over a period of twelve months.

On April 1, 2021, before the sharp and path breaking increase in U.S. inflation rates, Greysheet Bid for MS65 Saints was $2,210, more than 50% higher than Greysheet Bid was two years earlier, on April 1, 2019, $1,410. Recent, dramatic increases in values of PCGS and NGC graded MS65 Saints occurred long before this war and long before notable increases in inflation. One way to reflect upon this point is to think about the ratio of values of MS65 Saints to bullion. Each uncirculated U.S. $20 gold coin, including a MS65 grade Saint, contains .9675 troy ounce of gold. 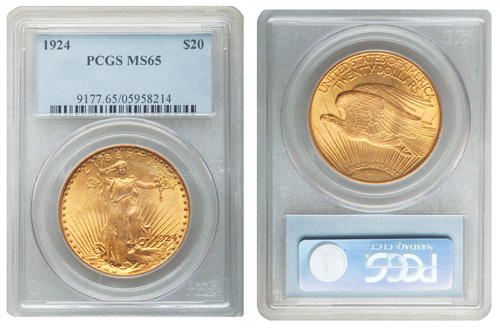 Although many buyers of MS65 grade Saints are speculators, MS65 Saints are prized collectibles and they were affected by the boom in demand by collectors rather than investors for classic U.S. gold coins. During the pandemic, there was a cultural shift in the direction of collectibles, especially portable collectibles, not just coins. Sports cards, rare stamps, prized comic books and vintage political buttons all increased in value. There was a surge in the popularity of various hobbies that are related to each other. 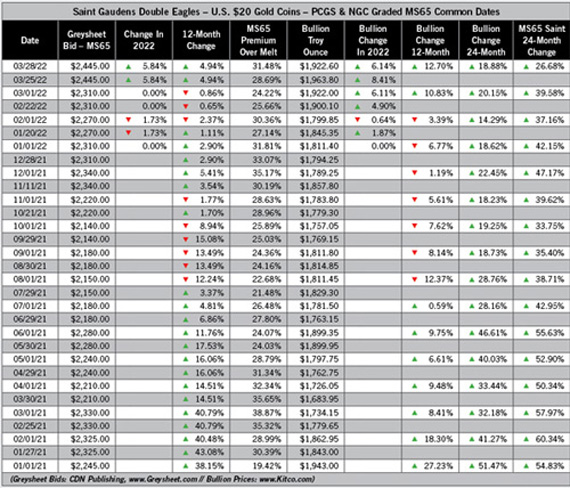 Subscribe to May 2022 edition of Monthly Greysheet for the industry's most respected pricing and to read more articles just like this.