CAC Coins For less Than $150 Each, Part 2: Buffalo Nickels

Many collectors will be surprised to learn that a collection of CAC-approved Buffalo nickels can be assembled for less than $150 per coin. 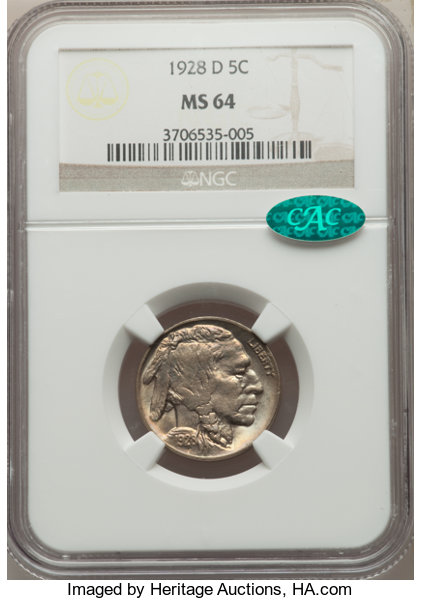 CAC Coins For less Than $150 Each, Part 2: Buffalo Nickels

Although I have been analyzing sales of CAC approved coins since CAC was founded in 2007, I was surprised to find that a substantial part of a CAC-only set of Buffalo nickels by date may be completed without spending more than $150 on any one coin. A collector may enjoy collecting inexpensive CAC approved Buffalo nickels and/or decide to later spend much more money to complete a CAC-only set.

It is educational to obtain and examine CAC approved coins. Each has been seen by at least two graders at PCGS or NGC, viewed by a screener at CAC and then finalized by John Albanese.

In the realm of CAC approved coins, there is little downside risk in regard to spending less than $150 on each coin. It is demonstrated in this discussion that a substantial number of low-cost, CAC approved Buffalo nickels, including many Denver and San Francisco Mint dates, have been available over the last three years.

Prices realized in recognized auctions and public internet sales are listed because these are results that are easy to access and are generally believed to have been reliably reported. Undoubtedly, other CAC approved Buffalo nickels have sold privately for amounts below $150 each.

No specific coin is being recommended here. There is no guarantee that collectors will be able to buy CAC approved coins for the prices realized or value estimates cited herein. This discussion is intended to be an educational resource, not a detailed collecting plan.

An underlying theme is that collectors may learn about CAC approved coins, acquire many classic U.S. coins, and have fun, without spending a large sum of money. As for the meaning, nature and benefits of CAC, I urge collectors to read my article (The Unheralded Role of CAC in Reducing Risk) in the August 2019 issue of this publication (Volume I: No. 1, page 5).

On January 15, 2019, Heritage sold a CAC approved MS64 grade Type One 1913 for $89. All the coins mentioned here were graded by PCGS or NGC and then later approved by CAC.

On June 26, 2018, Heritage sold a CAC approved XF40 grade 1914-S for $94. I continue to maintain that Extremely Fine grade Buffalo nickels are good values for collectors. These tend to have almost as much detail as mint state Buffalo nickels, which tend to not be all that sharp anyway.

The 1915-S is a much better date. There are four 1915-S nickels that are CAC approved in grades below VF25, each of which has a retail value below $150 according to CPG® estimates.

Just a small number of 1918 nickels have been CAC approved, eighty-eight as of November 4, 2020. These are very common. In regard to the thousands of 1918 nickels that survive, CAC fees and postage would be greater than the market values of most of them, so they are rarely submitted.

There are a very large number of CAC approved 1938-D Buffalo nickels that have publicly sold for much less than $150 each during the last three years. It would not make sense to list them here.

After a collector buys several or even a dozen CAC approved Buffalo nickels for less than $150 each, he or she should decide whether to budget much more money in order to build a set of Buffalo nickels or to move on to a different collecting project. Such a decision depends upon the coin related experiences, personal financial situation, and preferences of the individual collector.

Subscribe to February 2021 edition of CAC Magazine for the industry's most respected pricing and to read more articles just like this.