This series of discussions is about assembling a set without spending a vast sum of money and without spending decades searching for obscure varieties. The purpose of this second part is to explain the contents of a general set, of just twelve cons, so that collectors realize that such a set is logical and meaningful. 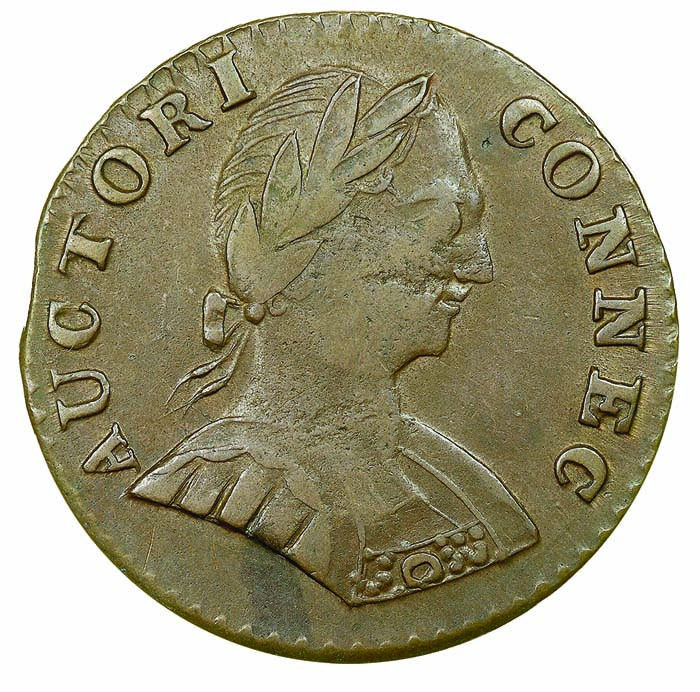 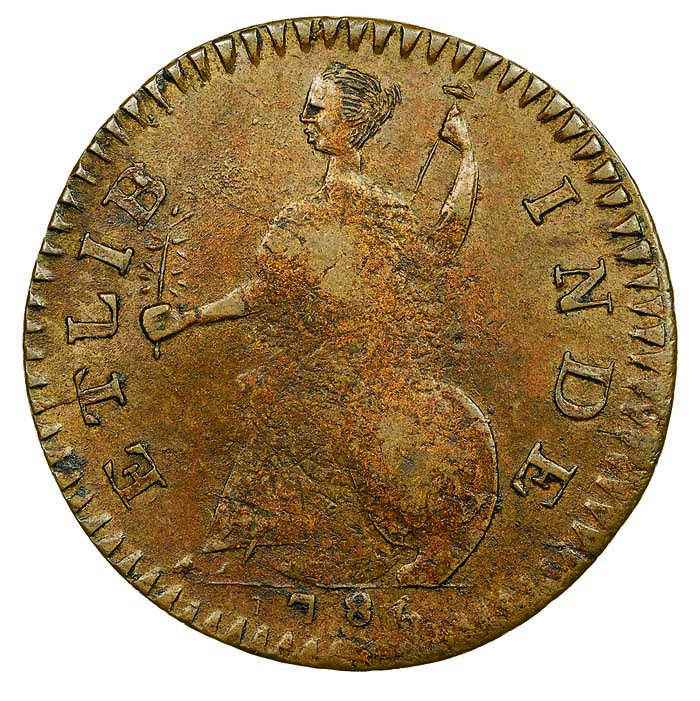 In part 1 of this series, the background and meaning of Connecticut Coppers were discussed. This series of discussions is about assembling a set without spending a vast sum of money and without spending decades searching for obscure varieties. The purpose of this second part is to explain the contents of a general set, of just twelve cons, so that collectors realize that such a set is logical and meaningful.

All Connecticut Coppers were intended to circulate at par with British halfpennies, which continued to be the main denomination below 1/32 of a dollar until U.S. citizens gradually became accustomed to U.S. cents and half cents. From the late 1790s until the 1830s, most silver coins circulating in the U.S. were denominated in and thought of as eighths of a dollar. For example, a quarter was two-eighths of a dollar, “two bits.” A Four Reales coin from the Spanish Empire was roughly equivalent to a U.S. half dollar. Spanish One-Real coins circulated widely in the U.S., each of which was valued at 1/8 of a dollar, 12.5 hundredths. Acceptance in markets of the decimal system and U.S. coinage denominations was gradual.

In the 18th century, the value of copper coins in silver fluctuated depending upon market conditions. In circulation in the U.S. during the 1780s, there were original British halfpennies and many imitations plus some counterfeits. While such counterfeiting was criminal behavior, making and spending imitations was considered to be a legitimate activity by most consumers and merchants. Even counterfeits of British halfpennies were often knowingly welcomed as they served a useful purpose in commerce. 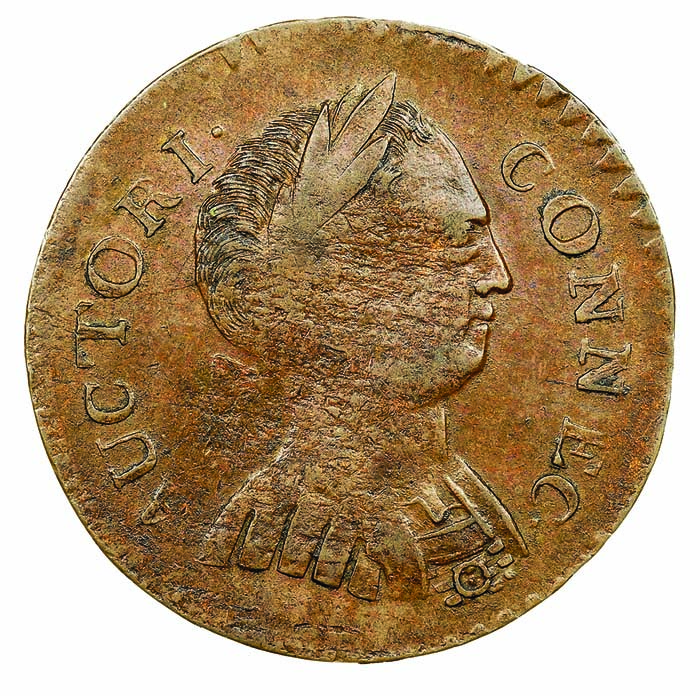 After 1754, true British halfpennies were not minted again until 1770. George III ascended to the British throne in 1760. Before 1790, George III halfpennies were struck at the Tower Mint in London for just six years, from 1770 to 1775, which pales to the earlier twenty-five year run of halfpenny production under his grandfather, King George II.

There are three reasons why the busts on Connecticut Coppers are not precise copies. The first was to evade anti-counterfeiting laws. Mintmasters were probably advised or figured on their own that coins intended to circulate at par with true British halfpennies could legally resemble British halfpennies provided that they were not too similar. During the 1780s, for a coin to be legally judged a counterfeit, it was usually true that it had to be very deceptive. Obvious imitations of British halfpennies, which did not fool merchants, tended to be legal or at least not on the radar of relevant law enforcement personnel. 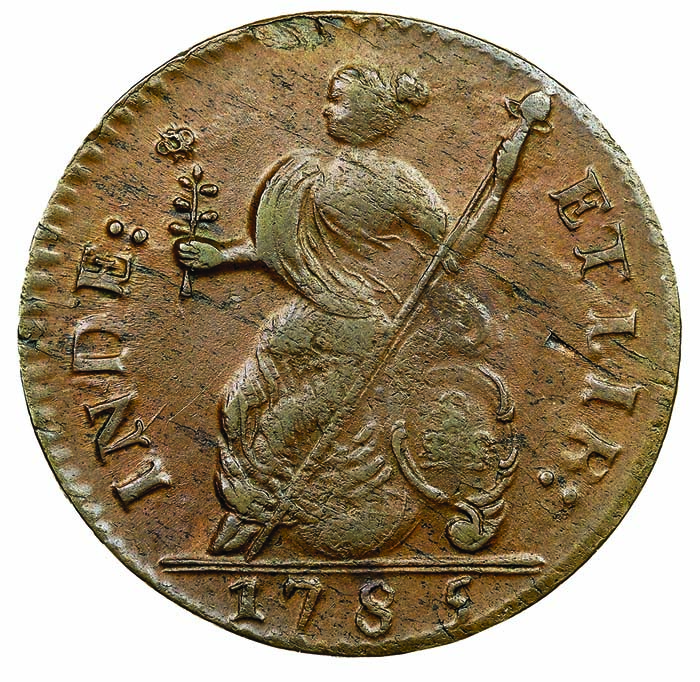 As many people in the 1700s were illiterate or nearly so and inscriptions on 18th century coins were often in Latin, different words on imitations may not have been sufficient to avoid charges of counterfeiting. There thus may have been a legal case for designing busts and allegorical symbols to be noticeably different from the respective devices on the coins that were being imitated or followed. In regard to both inscriptions and artistry, Connecticut Coppers were distinctive enough such that no one could have intelligently argued that they were counterfeits of British halfpennies.

The second reason is that artisans and coiners in the U.S. were subtly poking fun at British monarchs. The British were still the enemy. Although a peace treaty with Great Britain was signed in 1783, there remained much political tension. The War of 1812 pitted the U.S. against the British again.

The third reason relates to artistic pride. Designers and engravers tend to be creative people who are proud of their work. Usually, they are not interested in precisely copying the design elements of others.

There are more than three hundred varieties of Connecticut Coppers, some of which were not minted in Connecticut. Many varieties are distinguished from each other by stars, small crosses, cinquefoils, dots, periods, and differently placed letters. Even so, all Connecticut Coppers are of the same basic design. Errors in spelling or die punching, or the use of chipped punches by mint workmen, are beside the point that the general design is consistent. 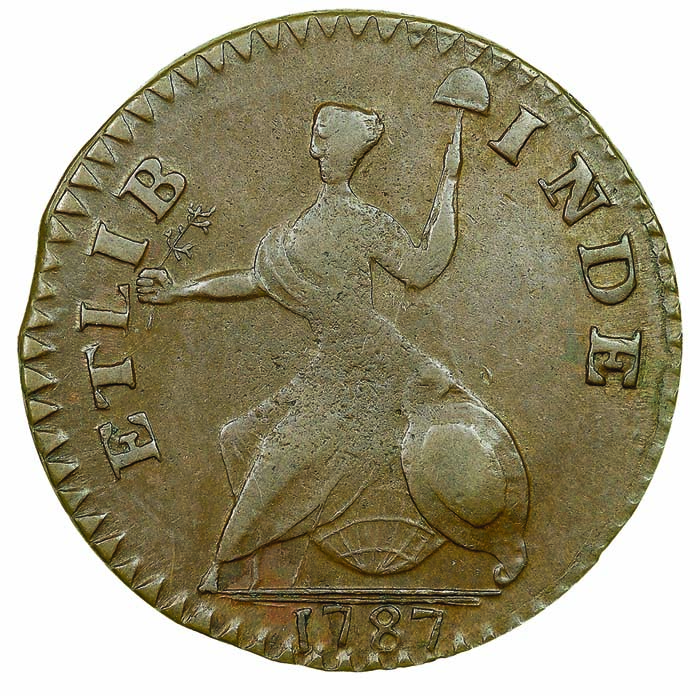 Building a set of almost all die pairings would require scholarly study, a considerable sum of money and a tremendous amount of patience. After assembling a general set, a collector who finds himself or herself extremely enthusiastic about the subtle varieties of Connecticut Coppers may wish to then collect by die pairing. I maintain that most interested collectors will be satisfied with a general set, as I have defined such a set, and will move on to other series rather than collect Connecticut Coppers by die pairing.

It is odd that the so called “Laughing Head” 1787 Connecticut Copper is often listed as an extremely important and visually outstanding variety, something of interest to collectors who assemble sets by date rather than by die pairing. More than sixty different obverse dies were employed to strike 1787 dated Connecticut Coppers. The “Laughing Head” is not really laughing and is not markedly different from other busts in 1787. It is just another intentionally inaccurate representation of King George III.

The 1787 Muttonhead Connecticut Coppers may have featured a subtle caricature of George III. As the term Muttonhead has been employed consistently by collectors for more than 145 years, it is used here as well, although this term is childish. The Muttonhead is very different from the busts on other 1787 Connecticut Coppers.