Greysheet Catalog Details
American Buffalo $25 gold coins were made only in 2008 at the West Point Mint in New York, and thus bear the ?W? mintmark from that branch facility. The 2008-W $25 American Buffalo coins contain a half ounce of pure gold and are therefore popular among precious metals investors. However, American Buffalo gold coins are not only sought by bullion investors, but they are also collected by hobbyists who appreciate the classic design on these coins.

These attractive gold bullion coins carry the timeless Indian Head and ?Buffalo? designs that James Earle Fraser designated for the nickel in 1913. The Buffalo nickel, which carries a likeness of an American bison, was produced until 1938 and became a beloved coin in both numismatic circles and in the general American public alike. 2008-W $25 Buffalo gold coins were made in relatively small quantities but remain plentiful given their levels of active demand. The West Point Mint struck 16,908 burnished specimens and 12,169 proofs. 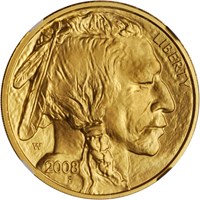